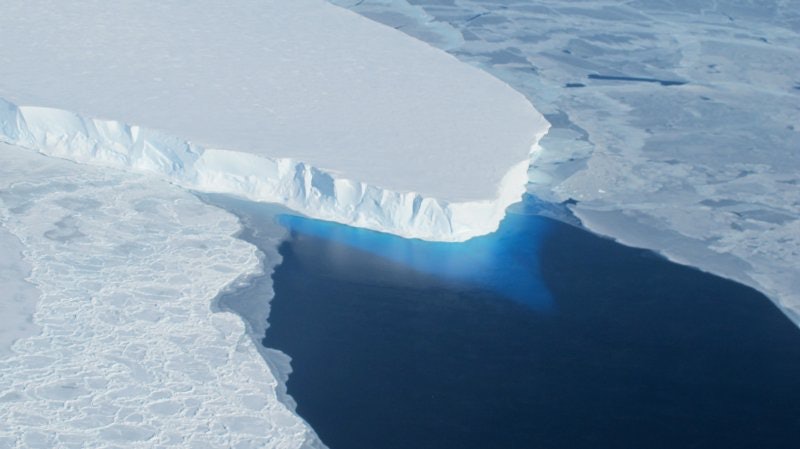 Really, really terrible news: The West Antarctica ice sheet has begun collapsing. This means major increases in sea level — not just in our lifetimes, but hundreds of years into the future. A full collapse could elevate global sea levels by a staggering 15 feet, which could flood, decimate, and functionally eliminate human and animal habitats in coastal regions all over the world. Great! And just like so many indications of climate change, scientists have been warning us that this was coming for a while.

The culprit in this colossal problem, besides the woeful reluctance of many lawmakers (cough, GOP, cough) to take overwhelming scientific consensus seriously, is the Thwaites Glacier. According to one study published Monday in Science, conducted by University of Washington at Seattle glaciologist Ian Joughlin and his colleagues, the Thwaites Glacier is undergoing heavy ice loss, losing meters of elevation every year, and the stability of the Thwaites is basically everything to the stability of the West Antarctic Ice Sheet writ large.

That's because the Thwaites is effectively a keystone for the ice sheet. In simple terms, the beginning of its collapse means the inevitable collapse of the whole thing, which spells out dire and catastrophic consequences.

Making matters worse, the second study, published in Geophysical Research Letters, lays bare the grim truth of humanity's relative inaction on climate change — there's basically no way to stop the Thwaites from collapsing now. Warming is now happening at a rate higher even than what scientists predicted, and whatever opportunity aggressive action may have once had to nip this crisis in the bud, everyone just kind of watched it happen instead. So now, it's too late.

The melting and collapse of the Thwaites itself is projected to take some time. The study by Joughlin estimates it'll take somewhere from 200 to 1,000 years for the glacier to fully disappear, which would only increase the sea level by about two feet — still a huge increase in scientific terms, but a far cry from what's expected to follow.

As the Thwaites shrinks and vanished, the research says, the whole ice sheet will collapse, ushering in the additional 10 to 13 feet of sea level elevation. Eric Ringot, a glaciologist at NASA's Jet Propulsion Laboratory and UC Irvine who headed up the second study, delivered his view of the situation in stark and simple terms in an emailed statement:

The collapse of this sector of West Antarctica appears to be unstoppable. This sector will be a major contributor to sea level rise in the decades and centuries to come.

So, what precisely is to come in all of this? First and foremost, unless major governments take this warning a lot more seriously than has been seen in the past, it's a safe bet that this slide will continue at its current pace. It's possible that by cutting greenhouse emissions, the rate of warming and melting could be slowed, but at this point it's a matter of if, not when. So said Joughlin, in response to his team's findings:

All of our simulations show it will retreat at less than a millimeter of sea level rise per year for a couple of hundred years, and then, boom, it just starts to really go.

So, basically, sorry everyone, but we missed our chance. Maybe we can try all over again on Mars in a few hundred years?

More like this
Here’s Where The NHS Nurses’ Strike Currently Stands
By Sophie McEvoy
10 Muscles You Work During A Kettlebell Swing
By Carolyn Steber
The Secret To Mastering Crow Pose In Yoga
By Carolyn Steber
The 5 Best Insoles For Overpronation & Flat Feet, According To Experts
By Jenny White
Get Even More From Bustle — Sign Up For The Newsletter
From hair trends to relationship advice, our daily newsletter has everything you need to sound like a person who’s on TikTok, even if you aren’t.