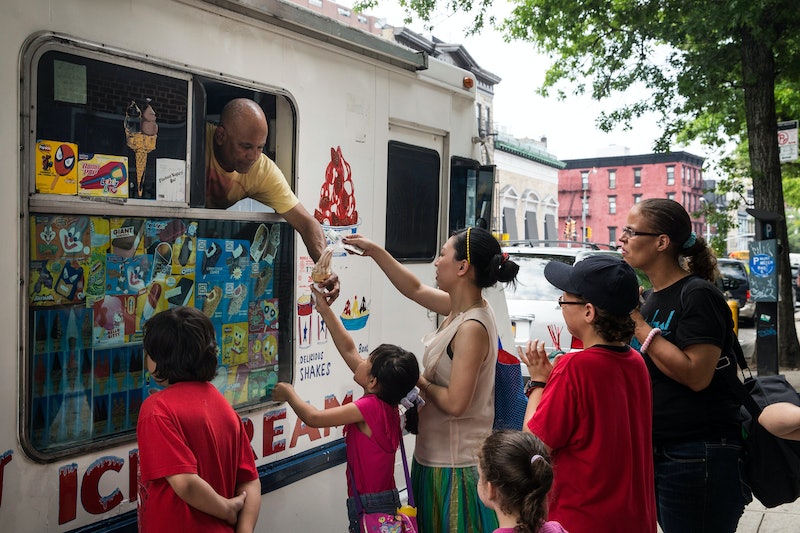 Do you know the ice cream truck jingle? (This one). Well, try not to get it stuck in your head again, because have I got bad news for you: it's the direct descendant of a very racist song that refers to watermelon as "the colored man's ice cream," complete with relevant expletives.

As reported sadly but dutifully by NPR, the ice cream truck jingle originated as a riff on "Turkey In The Straw" from the early 19th century, which itself originated from a traditional British song called "The Old Rose Tree." This is why we can't have nice things, though: by the time the tune had reached the United States, brought in by the Scottish-Irish immigrants of Appalachia, it had been put into use by minstrel shows that used blackface and over-the-top racial stereotyping for entertainment purposes.

The minstrel shows had changed the lyrics to suit their offensive purposes, and then ice cream parlors of the day borrowed their tunes from the shows. When ice cream parlors took their businesses on the road in the form of ice cream trucks, they played the same old music to attract customers. And that's how a old folk song turned into a soundtrack for racist comedy, then turned into a brand marker of ice cream. Then it receded just enough into the background, and the lyrics faded enough from memory, that we never even noticed until now.

So, far from this being Obama's post-racial America, we find vestiges of our hyper-racist past everywhere, from the chatter of the intelligentsia all the way down to the milkshakes that bring all the kids to the yard. Disappointing. As for me, I'm just feeling relieved that most of the ice cream trucks in New York City are Mister Softee brand, which has developed its own (seemingly innocuous) jingle:

You get from Mister Softee.

For a refreshing delight supreme,

No hidden sins of racism this time – just plain old gluttony! You can listen to the offensive lyrics here — warning, they are just awful.