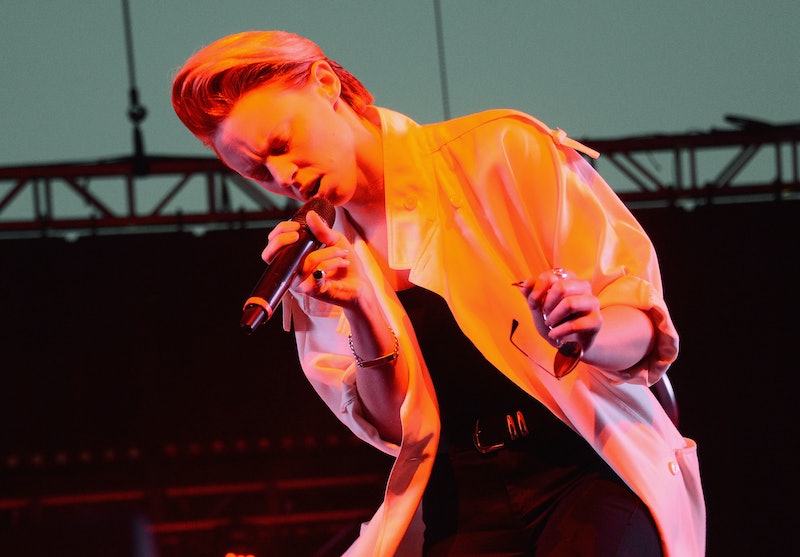 It’s been five long years since La Roux released their debut album and four years since their song “Bulletproof” was a big hit in the United States — but the English duo is finally back. La Roux’s new song, “Let Me Down Gently,” made its way online on Sunday. The excellent track will allegedly serve as the lead single from La Roux’s upcoming sophomore album, which is tentatively titled, Trouble in Paradise.

“Let Me Down Gently” is a slow burner — a gorgeous, '80s inspired synth-pop ballad that builds gradually to a big instrumental breakdown. It’s so nice to hear singer Elly Jackson’s angst-filled voice again! I don’t necessarily think that “Let Me Down Gently” will be a big hit for La Roux like “Bulletproof” was, but it is a lush, emotionally rich new song that you absolutely need to hear.

“Let Me Down Gently” has an unorthodox structure. The song starts off with its chorus:

Let me down gently, that’s what I think I need

But when you let me down gently, it still feels hard, hard

Turn me into someone good, that’s what I really need

Tell me that I’m someone good so we’re not so far apart, apart

From there, it becomes difficult to classify the lyrical sections, but there are a couple of really powerful lines peppered throughout. For example:

I hope it doesn’t seem like I’m young, foolish, and green

Let me in for a minute, you’re not my life but I want you in it

At around the halfway mark, everything goes quiet…and then the track bursts into a flurry of synths and beats. Eventually, there’s even a pretty sweet saxophone solo (didn’t I just say that saxophones are really “in” right now?). In a way, “Let Me Down Gently” reminds me of the “tears on the dance floor” ballads that Swedish pop singer Robyn has become so well-known for.

Even with a radio edit, I don’t feel great about “Let Me Down Gently’s” hit potential — but who cares? (I know, normally, I care, but I’m trying to let go of that stuff a little bit, okay?) “Let Me Down Gently” is a wonderful, well-written song that will have you bustin’ out all of your best 80s dance moves. That has to count for something, right?

Listen to La Roux’s new song “Let Me Down Gently” via Soundcloud below. Rumor has it the duo’s new album is scheduled for a July release.