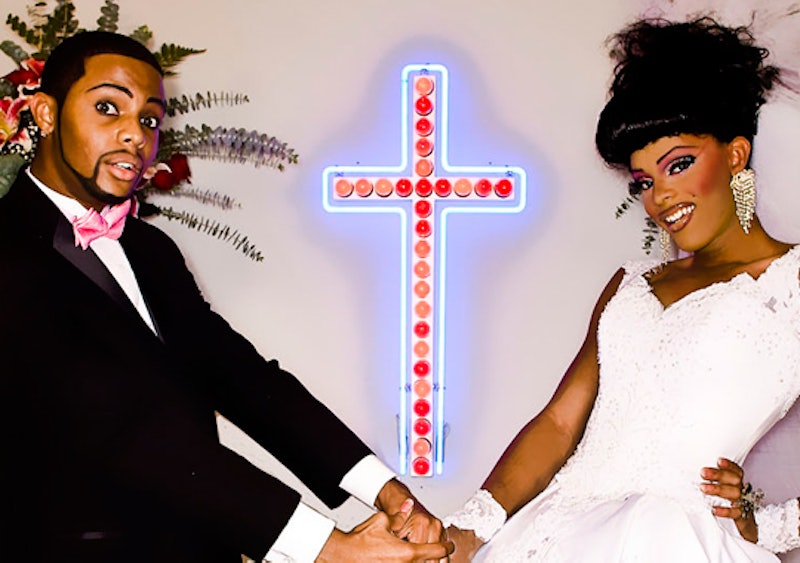 Sigh — another week gone by, and still we're no closer to knowing who will snag the Drag Race crown. Instead, Monday night's "Countdown to the Crown" show brought us heaps upon heaps of nostalgia and rehash, in an effort to raise the stakes and/or, to get another episode's worth of ad time without creating much new content. First, we were treated to an hour looking back at this past season, ranking everything from the "Top 4 Dragcessories" (thank God both April and Ornacia were on the list) to the "Top 5 Moments That Made Us Feel Things" (which, why Laganja's meltdown — unless the thing it made us feel was "schadenfreude"?). Ultimately, it seemed there wasn't much more to be gleaned from the footage of Season 6 than what we'd already seen. Even the ~special bonus behind the scenes material~ was hopelessly dull; I mean, when Keeping Up With the Kardashians won't run a clip, you know it's beyond even the murkiest depths of stagnancy — which is, indeed, is right where that awkward attempted lipsync of Khloé's belongs. (Note that they couldn't even cut together a compelling 15 seconds.)

Still, it wasn't all a loss: We learned that Ru voted Bianca #1 in both "Top Smackdowns" and "Top Support Ho's" — maybe that reigning balance means she's #1 overall? And furthermore, in the place of this week's Untucked, we were treated to the much-hyped 21.5 Moments That Made Us Gag special, a rehash of all five seasons thus far and their peak expressions of Charisma, Uniqueness, Nerve, and Talent. While I certainly appreciated a number of the moments featured — Manila's epic "MacArthur Park" lip sync (which should have been far higher on the list); Tammie Brown's "I don't see you walking children in nature"; Ru's admission that "Chicken or What?" was an abomination of the highest order — I ended up indignant that more of my favorite moments hadn't made the cut. So, for those of you willing to stroll down Drag Race's glittery memory lane with me, here are 21 (and a half!) more moments that I think were plenty gag-worthy, and then some.

Our half point goes to this Season 3 episode, in which the gals acted out double-entendre-laden sci-fi scenes to a fair number of laughs and snaps — a personal favorite, Manila's monkeyish "Tweaker." Still, it lives on in infamy in my mind particularly because the very title — Queens in Space! — is everything anyone could ever want. Really now: It's Ziggy Stardust meets shiny chrome futurism topped with shellacked, asymmetrical 'dos — high camp strutting through a jumble of B-movie schmaltz. Regardless of exactly what happened over those 40-some minutes of television (ugh, Phoenix, Mimi), we will always have our ideal, our ultimate, "Queens in Space."

21) Shangela coming out of the box

Okay, perhaps it wasn't an event we necessarily relished, given her subsequent (and rather frustrating) presence on the show in Season 3, but it was an iconic one, to be sure. And hey, at least Shangela gave us one undeniably glorious moment by proxy: Johnny Weir's sarcastic "Hallelu."

Because we need a little Shannel in this list, right? Queen did make it to Season 1's top four and come back for All Stars, after all. And really, who could forget 1) the bonkers costumery of her runway looks, especially that Medusa-themed breastplate/headdress number, and 2) when she utterly slayed her lip sync to "The Greatest Love of All," despite that headdress falling off midway through the song.

The cherry on this triumphant sundae: when she later admitted that she knocked the headdress off on purpose, in order to appear more vulnerable for the judges. You've gotta give props to a crafty queen — especially when she can rock a mean Whitney in the process.

And, speaking of shedding headwear mid-lipsync...

19) Milan "swiffering the floor with her taint"

Indeed, as Willam so poetically described it, there was an unforgettable LSFYL moment in early Season 4 when Milan, fed up with simply shucking off her drag mid-song (for the zillionth time) did what I can only describe as the Alien vs. Predator of dance moves — part split, part crab walk, all terrifying.

In the penultimate challenge of Season 2, Ru had her girls imagine (and design the covers for, and promote, and somehow tie in with the unpronounceable Absolut "Berry Açaï" vodka) their very own memoirs — one of which will always hold a very special place in my heart, if only because of how its creator pronounced its title. Of course, it seems cruel to mock any of the Spanish-speaking queens for their accents or language barriers, but when Ms. Wild repeatedly and proudly uttered what sounded an awful lot like "Dreams of a Golden Shower" — and moreover, when that fact was then pointed out by guest judge Jackie Collins of all people, who remarked "If she doesn't know what a golden shower is, that's very naïve" — it bears mentioning, I think.

Yep. Just the fact of her, really — the brash antics, the raw competitive nature without quite enough raw talent to back it up. Akashia was simply a queen before her season, I feel; she and Laganja would have gotten along famously (or at the very least, their attention-seeking drives would have viciously imploded). I particularly enjoy the above clip of her falling on her ass, then turning that fall into a choreographed spin. Get it, girl.

... featuring the I-still-cackle-aloud-every-damn-time line, whispered sensuously in her ear by one of the vintage pit crew: "Your makeup is terrible." (Also the title of her new single, coming out soon.)

Because come on, that was maybe the strangest Snatch Game choice in the history of Snatch Game choices. It's as if Adore had come in determined to play Charo as a German astronaut (which I now really want to see). But Alexis pulled it the hell off. Watching her hit on Amber Rose was nothing if not priceless.

And in contrast, Jinkx served up an iconic camp character — who nonetheless escaped some of the queens' cultural radars (I'm looking at you, Coco Montrese). So, not only did she slay her performance with quick wit and excellent timing, but she gave a wee lesson to those yet uninitiated in the decrepit splendor that is Grey Gardens.

It's like when Tatianna didn't know who Oscar Wilde was, and the older gentleman she was tasked with making over that week scoffed, ever so snootily, "There is a pantheon."

(Actually, can that be its own separate moment? No? Guys, we have so much to get through.)

Speaking of the "dress up a non-drag-inclined male" challenges, I will forever be endeared to Manila's Season 3 "Jocks in Frocks" partner, Matt. Watching him root for her from backstage, deep-voiced and fist-pumping in full geisha-esque attire, is an image for which I'm oh so grateful. Also, you've just gotta love that affable cluelessness.

Because let's be real, no one will ever stomp a runway quite like Raja. Special shoutout for that Carrie realness (I live, I die, I resurrect only to die once more, and gorily so!).

I would also accept, in this slot, Sharon Needles's plastic surgery ensemble, or her post-apocalyptic sludge demon getup from Season 4's first challenge.

Which brings me to...

Though many would choose to remember Lashauwn Beyond's short-lived Season 4 run for her infamous Untucked-opening quote — "I'm not here to make best buddies, bitch! This is not RuPaul's Best Friend Race!" — I will always cherish her beautiful confusion over the word "post-apocalyptic."

From Season 4's prison sitcom challenge "Hot in Tuckahoe," in which Latrice 100 percent stole the show as a butch prison guard with a distaste for peanuts and some serious neck-based 'tude.

(Honorable mention: that time Latrice bedazzled her lips with blue rhinestones and stomped out some Ursula realness and Kelly Osbourne read her for her "goth lesbian hiking boots" and Latrice, I love you, come back on television forever, pretty please.)

It's not often that Ru reads a girl to her face — okay, who am I kidding, she does it just about on the daily. But it is rare that said queen is so completely oblivious that she doesn't know she's being read, such that Ru gets to repeat the same joke thrice without it ever hitting home. Enter Tatianna, Season 2's resident airhead (see above, re: Oscar Wilde), who beats out even Gia Gunn for most annoying verbal tic: Instead of saying "thank you," Tati said "think you," every damn time. So, right before she sashayed away (at long, long last), Ru decided let her have it.

7) The many faces of Alyssa Edwards

Though her incredulous cry of "Backrolls?!" may have been enough to get her a shout out in Shade: The Rusical , Alyssa was woefully underrepresented on tonight's countdown — especially given that she was so, well, expressive throughout her run on the show. And, because I simply cannot post it enough, here's B. Ames's music-set remix of her very best moments, "Drop Dead Gorgeous":

Oh, the Season 2 wedding challenge — memorable, in my mind, for three things:

2) The fact that Tyra hot glued lace pieces to her arms to complete her look.

3) After an emotional runway experience, Tyra was proclaimed safe and, upon reaching the back of the stage, put her wedding veil over her face to hide how emotional she was. As Ru later called out in the reunion episode, it was a high-glam, old-school move.

And, because I feel like Tyra is often unfairly left out of Drag Race lore, let's revisit...

The around-the-head mic twist! The full bridge!!! Sure, Tyra may sound like Bea Arthur with laryngitis, but she is twirling and leaping and giving one hell of a show for her rockstar-studded panel.

4) Um, remember that time Henry Rollins was a guest judge?

Or Lily Tomlin? Elvira? Latoya Jackson and her adorable giggle? Sharon Osbourne getting adorably cheeky? Kelly Osbourne performing a full lip sync to "Cover Girl" with Alexis and Yara, and yes, being freakin' adorable?! All I'm saying is, it wouldn't have hurt to give the past guest judges some love. And on that note...

Because really, are we meant to forget that she ever was a part of the franchise — ret-conned from existence like the Interior Illusions Lounge?! This woman served as a mainstay judge for two whole seasons before Visage came on the scene, fer chrissakes. Is it in Michelle's contract that we never utter the name "Merle" on set again? (I wouldn't be terribly surprised.) Anyhow, I say we give a salute or two to Ru's initial righthand gal.

Not only was the indomitable Cazwell a guest judge on this Season 1 finale challenge, but its winner also gave us this piece of sheer, unadulterated verbal righteousness, smack dab in the now-ubiquitous RuPaul runway hit:

I find myself repeating this mantra in my head when walking to job interviews, first dates, through particularly lengthy subway transfers. An anthem to live by if ever there was one.

1) Jujubee's Trip to the Library

Get my jist? Do ya understand?

More like this
Elizabeth Debicki On Her Approach To The Most Debated Scene From 'The Crown'
By Grace Wehniainen
Owen Warner's Net Worth Might Surprise 'I'm A Celeb' Fans
By Sam Ramsden
Here’s Everything Coming To & Leaving Netflix In December
By Jake Viswanath
17 Photos Of The 'Wednesday' Cast Vs. The 1991 'Addams Family' Cast
By Grace Wehniainen
Get Even More From Bustle — Sign Up For The Newsletter