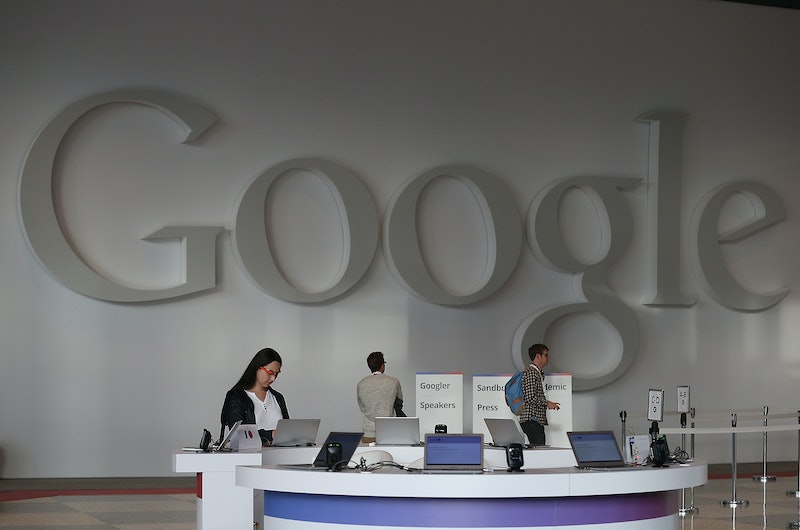 Anyone else breathe a deep sigh of relief Tuesday? The Court of Justice of the European Union ruled that search engines like Google can be forced to remove personal information deemed irrelevant or excessive from search results. Apparently, people's right to privacy outweighs the general public's right to know random facts about people they've never met. Win!

The case in question came from a man from Spain, who objected to the fact that when you typed his name into Google, the search engine came up with links to a 1998 newspaper article about the repossession of his home. Europe's highest court agreed that under certain circumstances, Google and other search engines must remove links to newspaper articles and other websites that contain personal information.

The data that search engines can be made to remove are those considered "inadequate, irrelevant or no longer relevant, or excessive in relation to the purposes for which they were processed and in the light of the time that has elapsed," the judges said in a statement. If the search engine doesn't comply, then a person can ask a court or a data-protection authority to take up the fight on their behalf.

Surprise, surprise — Google said that the ruling was "disappointing," particularly because it contradicts a non-binding opinion that was issued by the court's adviser last year, which said deleting sensitive information from search results would constitute an interference with freedom of expression. Larry Cohen, a partner at law firm Latham & Watkin, also pointed out to Reuters that there would also be several negative practical implications for Google and other search engine providers.

"This will result in added costs for Internet search providers who will have to add to their take-down policies the means for removing links to an individual's data, and develop criteria for distinguishing public figures from private individuals," he said.

I can understand the fear that this could start to look an awful lot like censorship — especially if public and political figures start trying to doctor their pasts. It also raises questions that the case under review involved a newspaper article: What will this mean for newspaper archives?

Well, for the time being, it just means that people are going to need to know what they're looking for. When you type someone's name into a search engine, links to certain information that they've asked to be removed — such as newspaper articles — won't show up, but the information will still be there. You'll need to know you're looking for a specific newspaper article, or bankruptcy record, and go directly to the original site where the information is published.

But for the average person, having a little bit of control over the personal information that others make available about you online has got to be a good thing. I'm all for freedom of information, but at the same time people should really be afforded the ability to step away from things that happened in their past that have absolutely no bearing on anything anymore.

For example, Mario Costeja, the man in question in this court case, was frustrated that he was still being haunted by debt issues that had been long-since resolved. I'm sure there are also people out there who don't want to be judged by drunken YouTube videos of them at college a decade ago, or any other minor indiscretion that some "friend" immortalized on the Internet.

The new regulations — which still need to be approved by all 28 European Union governments before it can become law — now shifts the burden onto the companies to prove that data still needs to be kept online, rather than on the individual to prove it's now irrelevant.

I don't know about you, but I call that a result.