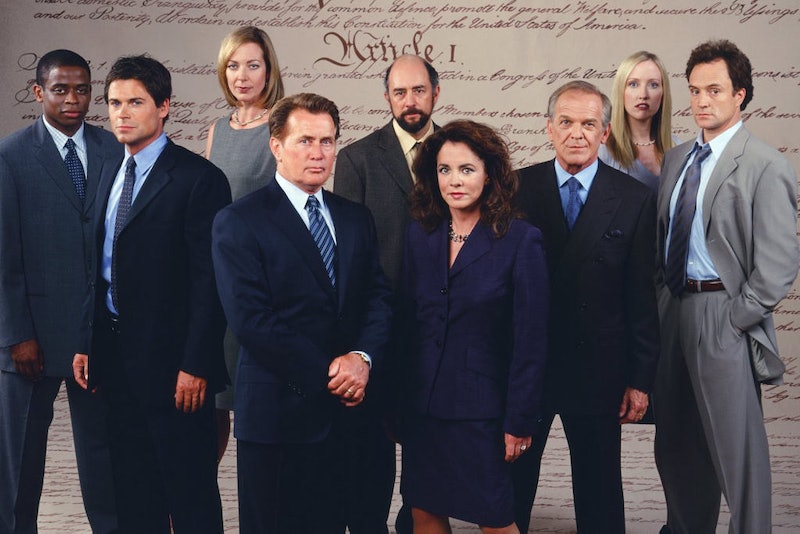 When people talk about the best drama series ever on TV, the conversation tends to revolve around Breaking Bad, Mad Men, The Wire — you know, cable shows. The ones broadcast on the regular networks, channels where you can't say the F-word or show graphic sex scenes, never seem to make the cut; generally, network series tend to get pushed to the wayside when it comes to listing off the best. That's a shame, because some of the greatest series ever to air happened to do so on the "regular" channels. There was Friday Night Lights, Buffy, ER — and, of course, The West Wing , which celebrates its fifteenth anniversary this year.

For those who had the pleasure of watching, whether on NBC back in the '00s or, more recently, on Netflix, it's clear that The West Wing deserves a high, high spot on the list of all-time best shows. Between that incredible cast (Martin Sheen! Allison Janney! Elisabeth Moss!) and Aaron Sorkin's whip-smart dialogue, the political drama earned each one of those 26 Emmys. To commemorate the start of this legendary show, The Hollywood Reporter recently commissioned a West Wing oral history, an in-depth look at the series' creation and run from Sorkin, Janney, Bradley Whitford, Rob Lowe and many more. For Wing fans, it's a must-read, especially if you're into the whole "what really happened when Sorkin/Lowe/etc. left the show?" debate (and who isn't?), among other surprises. Below, 11 things you didn't know about The West Wing:

It Wasn't Even Supposed to Exist

When The West Wing was green-lit by NBC, Sorkin hadn't actually been planning on making a TV show. He was intending on writing a play or movie, but at a supposedly casual meeting with NBC producer John Wells, he was asked to pitch an idea for a new show — and instead of saying, "I'm sorry, there's been a misunderstanding. I don't have anything to pitch," Sorkin improvised, saying "I'd like to do a series about staffers at the White House." And thus: The West Wing.

Josh was Almost an Action Hero

Although the show would go on to be a huge success, at first, NBC wasn't exactly thrilled about green-lighting a dialogue-heavy, office-set series about politics. When the pilot was delivered, Sorkin met with "respectfully underwhelmed" network executives who had a few suggestions to liven up the plot, one of which involved Josh rescuing Cuban refugees stranded at sea. Said Sorkin, "I honestly didn't know if I was being messed with or not." Thankfully. new executives took over, and Josh Lyman, the action hero, never became a reality.

It's hard to imagine anyone else but Martin Sheen as Jed Bartlet, but for awhile, his casting in the show wasn't a sure thing. Originally, West Wing producers offered the role to Sidney Poitier, and then, after those talks died, Jason Robards, Hal Halbrook, and John Cullum were all considered. Finally, Sheen, who'd co-starred in Sorkin's The American President, said he'd like to play the part, and the network happily accepted — for a run of four episodes. They had no plans to have the president be a central focus, but when Sheen was "the highest-testing character in the pilot, by far," he was made a regular.

But Once He was, He Got Really Into It

According to executive producer Kevin Falls, the success of the show occasionally went to Sheen's head, such as when the network sent the actor to the 2000 Democratic Convention. Said Falls: "As we're walking, everyone recognizes Martin — hard hats, delegates, everybody — and Martin is embracing it. Martin thinks he's president. He's waving, signing autographs. It was surreal."

From Bradley Whitford, aka Josh Lyman: "I always joke with Aaron — and it goes for Tommy [Schlamme, executive producer] too — that The West Wing was a great show about democracy run by a couple of Kim Jong-ils."

And the reason she didn't is all her fault — well, Kathryn Joosten's. At an awards show, the actress revealed to Sorkin and Falls that she was up for another pilot, and since she wasn't a regular on The West Wing, she was legally allowed to leave. Sorkin's creepy, immediate reaction: "We're going to kill Mrs. Landingham." And "Two Cathedrals," often considered the best West Wing episode of all time, was born.

No One Wanted Rob Lowe to Leave

Although Lowe has developed a not-so-good reputation for exiting shows early, there's no bad blood between him and The West Wing staff despite him leaving the show in its fourth season. Said Sorkin, the producers "did everything we could to try and change his mind," but ultimately, they supported Lowe's choice. Still, not everyone understood it. Said Whitford, "I thought it was a mistake."

But Aaron Sorkin's Exit Was Even Worse

Said Janney, "we all felt kicked in the stomach. We felt like we were being abandoned by our parents. We didn't understand it, we didn't want it to happen and there was nothing we could do about it."

According to Sorkin, Richard Schiff and Allison Janney often made life difficult for the crew. "If they had a scene together they'd be serious geniuses for three takes and then they'd lose it," he said, adding that it got to the point where one actor would have to leave the room when the other shot their scene. And while they were in their trailers, waiting to film? They'd start doing "ridiculously silly things..." such as lip-syncing to songs like "The Jackal."

Most fans would agree that The West Wing's series finale was pretty perfect, with Santos being inaugurated, Toby getting pardoned, and President Bartlet, having left office, admitting that he was thinking about "tomorrow." Not Sorkin, though, who pictured a finale where "Bartlet, the now ex-president, would be in street clothes and a baseball cap and just blend into the crowd until we couldn't make him out anymore."