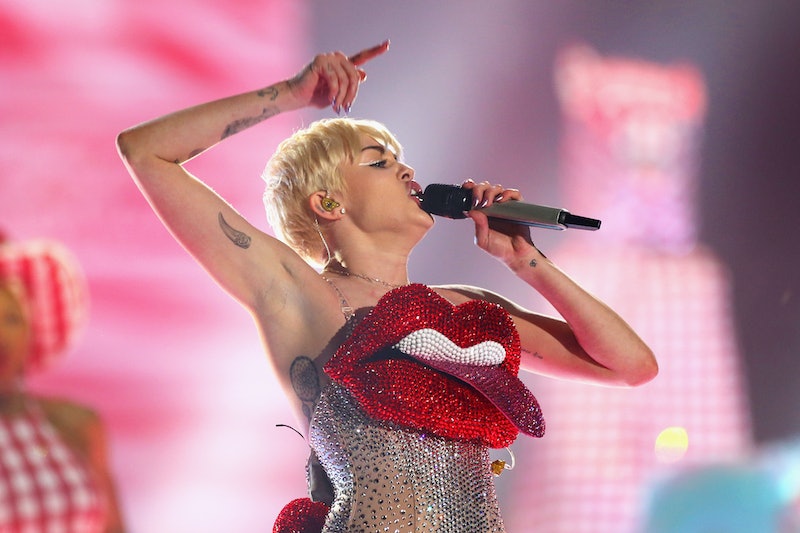 Rebellious pop star Miley Cyrus is going to have some interesting collaborators on her next album, and I’m super pumped about it. In a recent interview with Rolling Stone, Cyrus revealed that she has written songs for her new album with rock band the Flaming Lips. Cyrus hopes to record the tracks after her current Bangerz tour is over.

Cyrus began her friendship with the Lips late last year after lead singer Wayne Coyne said in a Rolling Stone interview that he was a big fan of her wacky on-stage antics. A short while later, Cyrus hit the studio with the band to record “completely weird” cover versions of The Beatles’ “Lucy in the Sky With Diamonds” and “A Day in the Life.” Cyrus said of working with the band:

On my last record, everything we did was with computers. But they’re real musicians — they can change keys on a whim. I’ve never seen anything like it. They’ve had me on this journey that’s greater than anything I’ve been on. It’s really deep.

At first, Cyrus and the Flaming Lips kind of seems like an odd combination, but I actually think that this could be a really cool development in Cyrus’ evolving music career. After all, the last time Coyne teamed up with a pop star, the results were pretty amazing. Of course, I’m talking about Kesha.

Coyne and Kesha recorded several songs for Kesha’s sophomore album, Warrior, but unfortunately, only one ended up making the final cut: the gorgeous, “Past Lives.”

“Past Lives” takes us beyond Kesha’s party girl façade and finds her singing about a love so deep and true, it feels like it started centuries ago. The song represents a totally new sound for the "Tik Tok" singer that’s refreshingly uncomplicated and organic.

Like Cyrus, most of Kesha’s popular music has been electronic. While recording her debut album, Animal, Kesha even had a "strict no-guitar rule." With “Past Lives,” fans finally got to hear something different from Kesha — something vulnerable, emotionally honest, and sweet. The song shows that behind the layers of hard-hitting beats, pulsating synths, and slick auto-tune, Kesha has a beautiful voice and a whole lot of heart. (Hopefully, Kesha and the Flaming Lips will be able to release their collaboration album, Lip$ha, at some point in the near future.)

If Coyne and the Flaming Lips are able to deliver songs for Cyrus that are even half as awesome as “Past Lives,” I’m on board. It certainly sounds like working with the band has been a really meaningful, worthwhile endeavor already. I can’t wait to hear the music that Cyrus and the Flaming Lips have cooked up together!

More like this
5 Wild Theories About Miley Cyrus’ “Flowers” Music Video
By Jake Viswanath
Beyoncé Just Announced Tour Dates: Here's How To Cuff Tickets To Her 2023 Shows
By Jake Viswanath
Twitter Is Having A Meltdown Over Buying Beyoncé Renaissance Tour Tickets
By Jake Viswanath
All The Best Celebrity Reactions At The 2023 Grammys
By Brad Witter
Get Even More From Bustle — Sign Up For The Newsletter
From hair trends to relationship advice, our daily newsletter has everything you need to sound like a person who’s on TikTok, even if you aren’t.