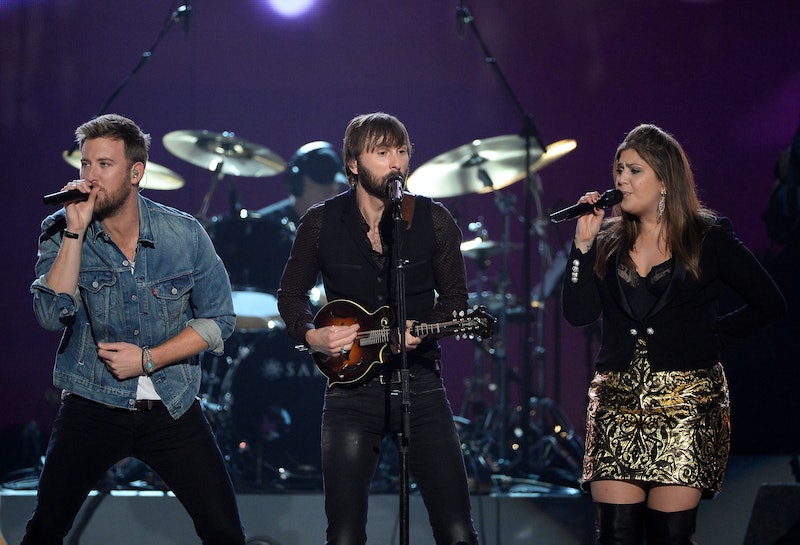 Whenever someone brings up this Grammy-winning trio*, the only tidbits I can bring to the table are that they have great harmony and that two of the band members of Lady Antebellum are married. But as soon as I bring up the latter point, someone inevitably asks me who the happy couple is, which leads to me mumbling undetermined words over my shoulder that I hope no one can hear.

The even sadder fact is that if I were to make a guess, I would probably say that Hillary Scott is either married to the other lead singer, Charles Kelley, or the background singer/guitar player, Dave Haywood. However, I would be terribly, terribly wrong. Apparently Scott is married to none other than the band's sometime-drummer, Chris Tyrrell. (Who is he even? *I thought Lady A only had three members.)

It turns out that Scott and Tyrrell met while their individual bands were touring with Tim McGraw in 2010. Since then, they've married, had a daughter named Eisele, and inspired Lady A's hit song, "Just a Kiss." I guess love songs are definitely the number one perk of being in a relationship with a musician — or in this case, two musicians.

So are Scott and Tyrrell the only bandmates that have fallen in love with each other? Heck no. Check out some of the other musically-inclined lovebirds that have rocked out together:

The Mamas and the Papas

Not only did Michelle and John Phillips form the legendary '60s band, which also included Cass Elliot and Denny Doherty, but they also tied the knot. However, the bandmates weren't able to keep the love flowing, and the marriage eventually ended in divorce.

Oh, Stevie Nicks and Lindsey Buckingham — what a torrid relationship. According to Nicks, they first met in high school at a party where he was "sitting, playing his guitar — [the Mamas and the Papas' hit] ‘California Dreamin’ — and [she] walked up and brazenly burst into harmony with him." Talk about a match made in heaven. The couple released their album Buckingham and Nicks in 1973, and then later joined Fleetwood Mac. Unfortunately, their relationship wasn't meant to be. But as any Fleetwood Mac fan knows, there's still love in the air. Just take a look at what Nicks had to say about their romance:

It’s over. It doesn’t mean the great feeling isn’t there, it must mean that … you know, we’re beauty and the beast. It means that the love is always there but we’ll never be together, so that’s even more romantic.

And not to totally steamroll the other members in the band with Nicks and Buckingham's tumultuous love story, Fleetwood Mac bandmates John McVie and Christine McVie were also in a relationship. However, the bassist and keyboardist, respectively, ultimately decided to end things.

JK. None of the boys are dating each other, but they did totally reveal who they would date. By the looks of it, Louis is the most eligible bachelor.