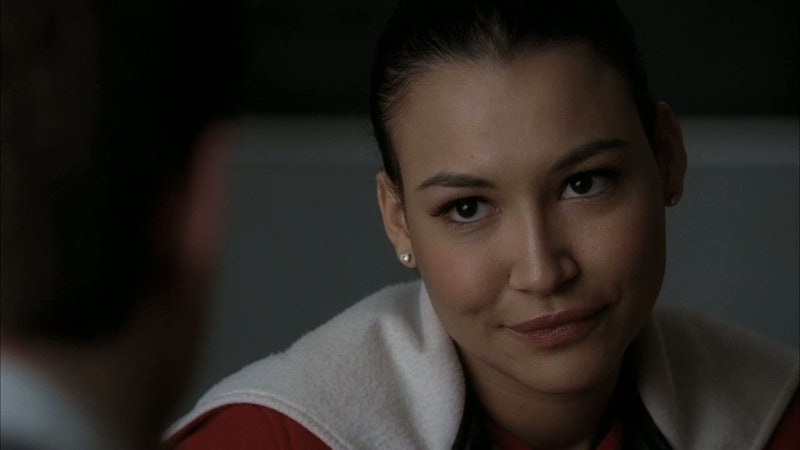 Santana was MIA in the Season 5 finale of Glee, but don't worry, folks — she was in Iowa! While we learned weeks ago that Santana would be written out of Glee 's Season 5 finale of the musical dramedy, the way in which Santana was removed from the storyline was spectacularly ridiculous. Why wasn't Santana present during Blaine's big showcase, Brittany's return to New York, and Rachel's TV show development? Because she was filming a Yeastistat commercial... in Iowa. Which is about as realistic as... well, about anything that happened in the Season 5 finale.

Despite Santana spending the entirety of last week's episode helping Rachel build up a good reputation as her publicist, the mean girl with a big voice (and occasional heart of gold) was nowhere to be seen. Santana's absence was quickly explained by Mercedes, who told the New York glee club grads that Santana was filming a second commercial for the yeast infection cream that she was selected to promote earlier in the season. Apparently Santana had to head to the midwest in order to shoot this commercial because... reasons.

Santana's absence from the Season 5 finale isn't surprising, but not seeing her alongside the other McKinley graduates was pretty depressing. This episode could have totally used some more Santana! Not only did we miss what could have been a fantastic Brittany/Santana duet, but we also missed Santana snarking at The Untitled Rachel Berry Project's eccentric, weirdo scriptwriter. Personally, I think that Glee could have used Santana's smart snark far more often in Season 5, and it's pretty disappointing that Rivera was missing when she had so much raw material to work with.

So where does Santana's absence in the finale put us for a potential return in Season 6? If we're solely talking about the story, then Santana could easily return to the last season of Glee. She could have a ton of amazing adventures within the six-month time jump that the show has hinted at. Perhaps Santana will follow Rachel to Los Angeles and become her publicist full-time. Or perhaps she'll become a star in her own right — could she snag a spot on Rachel's TV show? What is she went back to her roots over the past six months and schooled the Cheerios at McKinley alongside Sam? When it comes Santana, the possibilities are truly endless.

Then there's the sad possibility that Santana may not return at all — which the show could also easily set us up for. Though Rivera is still under contract with Glee, a lot can happen between now and the midseason premiere of Season 6. After all, there really isn't any reason for Santana to show up again. She wasn't present during the finale and therefore wasn't around to hear the "let's-meet-up-in-six-months" speech that Rachel gave, which means that she isn't obligated to check back in with her old friends in case they lose touch. Perhaps Santana will achieve great things — as an actress, singer, publicist, what have you — but be so busy that she never reconnects with the old New Directions? If that's the case, all Glee needs to do is give one of the returning cast members a line about what Santana's currently up to — and perhaps a Photoshopped post card or two documenting her adventures —in order for audiences to be left somewhat satisfied.

That being said, I hope that Santana (and, obviously, Naya Rivera) returns to Glee . Without her sass and snark, Glee is just a little too saccharine for anyone's liking.

More like this
The 'Grey’s Anatomy' Season 18 Finale Might Have Had A Sneaky April Easter Egg
By Grace Wehniainen
The 'This Is Us' Finale Featured An Adorable Season 1 Jack & Rebecca Easter Egg
By Grace Wehniainen
Twitter Has Very Mixed Feelings About The New 'American Idol' Winner
By Jake Viswanath
What Does Michael Peterson’s Family Think Of 'The Staircase'?
By Arya Roshanian
Get Even More From Bustle — Sign Up For The Newsletter