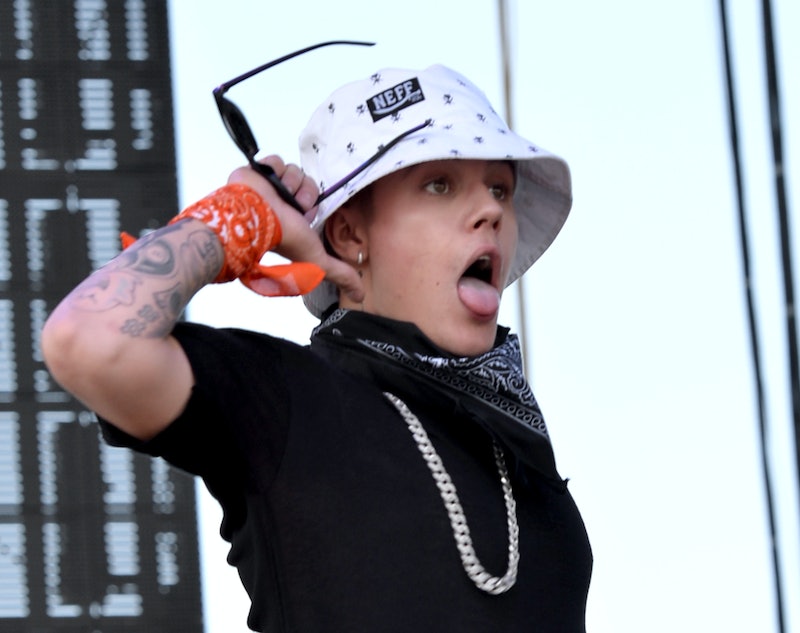 Bieber is at it again. And by "at it again," I mean "once again acting like a total jerk for no reason whatsoever." This time, a San Fernando Valley woman is alleging that Justin Bieber attempted to steal her cellphone — and the alleged story paints him as even more of a brat than we already thought he was.

According to TMZ, Bieber was hanging out at Sherman Oaks Castle Park, hitting balls with his friends in the batting cages. A woman and her 13-year-old daughter spotted Bieber and his crew, and, apparently finding the Biebs a worthy subject, went into her bag to get her phone. When Bieber saw this, he promptly freaked out. He went over to the woman and allegedly demanded that she give him her phone so that he could see if there were any photos on it. When she refused, the Biebs allegedly tried to wrestle the phone out of the woman's hands, hence the "attempted robbery."

The woman told Bieber that she and her daughter just wanted to come over and say hi (because, uh, obviously) to which Bieber allegedly screamed, "You're humiliating yourself in front of your daughter. Why don't you just get out of here!" (To which I would have responded, "You, young man, have very little self-awareness. Be gone with you.") The woman's daughter began to cry, because being yelled at by a terrible person is still not a great feeling.

The woman filed a complaint with the LAPD who will investigate to see if a crime occurred. If the woman's story is true, and the LAPD choose to pursue the case, then Bieber may get in some sort of legal trouble for his attempt to take her cell phone. However, I don't think that the Biebs is really a wannabe robber as much as he's just a plain ole' jerk. Unfortunately, there aren't many places that will convict you of jerkiness. If there was, the Biebs would be away for a very long time.

Bieber is one of the most famous celebrities in America, and people are going to want to photograph him. That's a fact, plain and simple. I can understand Bieber's annoyance with having the more private aspects of his life documented, both by paparazzi and by excited fans — I would hate that, too. However, there's really no excuse for being a grade-A jerk.

There are so many other ways that he could have handled the situation so that he wouldn't have been photographed or made a 13-year-old cry. He could have been level with the woman about his desire for privacy, and if that didn't work, talk to one of the complex's security guards. He could have offered to take a photo with the woman and her daughter, in exchange for them leaving Bieber and his friends alone for the rest of the night. Clearly this woman wasn't a paparazzi disguised as a tween's mom, so it's not like Bieber realistically had a lot to worry about.

Look, no one likes a jerk, and the Biebs has proved once again that he's simply not a very nice guy. He may get to hide under the cloak of fame for now, but if he really wants his career to have staying power, he should try being a bit nicer to his fans.

More like this
Justin Bieber Just Added Another Date To His UK Tour
By Sophie McEvoy
Selena Gomez Reacts To TikTok Users Who Say She Shaded Hailey Bieber
By Grace Wehniainen
Sandra Bullock, Girlboss Extraordinaire
By Matt Harkins & Viviana Olen
Kaley Cuoco & Tom Pelphrey Just Made Their First Public Appearance As A Couple
By Hugh McIntyre
Get Even More From Bustle — Sign Up For The Newsletter