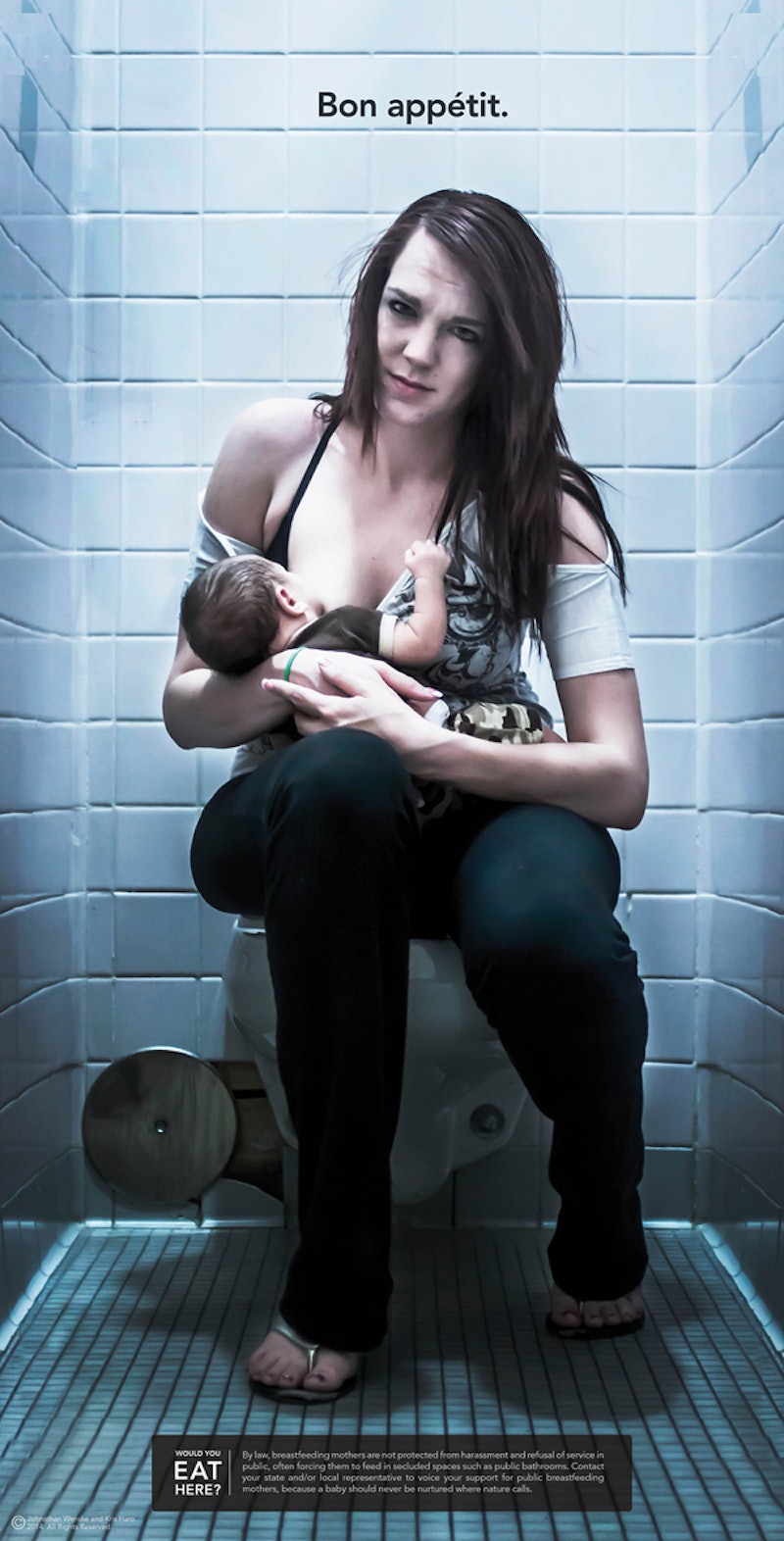 Topping the list of offensive things people shouldn't be able to do in public: smoke cigarettes in parks, wear Google Glass just about anywhere, take ubiquitous selfies...But you know what isn't on that list? Breastfeeding in public, as a new ad campaign called "When Nature Calls" by two University of North Texas students makes clear.

Students Johnathan Wenske and Kris Haro created the campaign in support of Texas legislature bill HB 1706, that would "ensure that a mother’s right to be in a location may not be revoked solely because she begins to breastfeed" and "generally prevent a person from interfering with a woman's right to breastfeed."

While public breastfeeding is already protected by Texas law, HB 1706 would strengthen the existing laws in multiple ways. It would provide education on breastfeeding to business owners, offer compensation for mothers whose rights have been violated, and instruct state agencies to develop mother-friendly policies in the workplace. The overall idea is to reduce the amount of harassment mothers get while breastfeeding in public by spreading awareness and acceptance of the act. And just to remind you, the "act" in question is giving sustenance to an infant so that it can stay alive.

"Breastfeeding provides numerous lifelong benefits to infants. These include improving cognitive development, and reducing risk factors for childhood obesity, asthma, celiac disease, post-neonatal death, and certain cancers. In the Health and Safety Code, Texas law recognizes a mother's right to breastfeed in any location in which she is otherwise authorized to be. However, the public does not generally know about this right. Rep. Farrar is filing this bill for the fifth time."

Farrar is not alone in championing this cause, and so far, HB 1706 has received widespread support. Wenske and Haro's When Nature Calls campaign will put "reflection" ads in bathroom stalls that read:

"Would you eat here? By law, breastfeeding mothers are not protected from harassment and refusal of service in public, often forcing them to feed in secluded spaces such as public bathrooms. Contact your state and/or local representative to voice your support for breastfeeding mothers, because a baby should never be nurtured where nature calls."

Here's a look at the ads:

Besides this attention-grabbing campaign, a group of public health doctoral students started a petition on Change.org that rallied to support passing HB 1706 and the countless mothers everywhere who just want to be able to nurse their infants without dirty looks or judgment.

So what exactly is the big deal? The most common reason people give when they ask a mom to take their breastfeeding elsewhere is indecency. This occurs most often when the mom is in a public space, but some moms have even been punished for nursing in private settings. Yes, moms need to take their breast out in order to nurse; that's kind of nonnegotiable. And while I'm sure maternity brands offer a cornucopia of stylish nursing blankets, covering up the act is only helping to perpetuate the taboo surrounding breastfeeding.

The real issue here is public education. People (OK, let's not beat around the bush — mostly men) need to shift their mentalities when it comes to breasts. They are not just for your ogling pleasure. Breasts have actual functions, ones that help to sustain life. And in the context of breastfeeding, they are functional body parts — nothing more, nothing less.

The Los Angeles Times wrote about society's fixation on female breasts, and the paradox that it presents, which makes scantily clad women in lingerie ads acceptable to society but a sliver of skin when breastfeeding an outrage. The article cites Beyoncé to illustrate society's inability to accept the breasts as both sexual imagery and nursing tools. Why does Beyoncé breastfeeding in public make headlines? Could it be because people were subconsciously shocked to see her sex icon facade disintegrate and give way to a normal, everyday mother?

Society's obsession with breasts will not wane, nor should we discourage the worshiping of the female form, but what we can do is to raise awareness of its other functions as well. It goes without saying that women should be judged for more than their bodies, but that doesn't mean we shouldn't be celebrated for them either. Let's not forget that a certain other body part literally creates humans.

So how do we start shifting mentalities? HB 1706 would be a good place to start. While making harassment punishable by law is vital to the bill, the crucial component will be its focus on education. Because when people are educated, it'll seem absurd to harass a breastfeeding mom in the first place.

More like this
Plan C Vs. Plan B: What's The Difference?
By Lexi Inks
5 Crystals For Anxiety
By Megan McCarty
5 Crystals To Manifest Better Sleep
By Megan McCarty
How The City Healed Five Years On From The Manchester Arena Attack
By Ella Glover
Get Even More From Bustle — Sign Up For The Newsletter