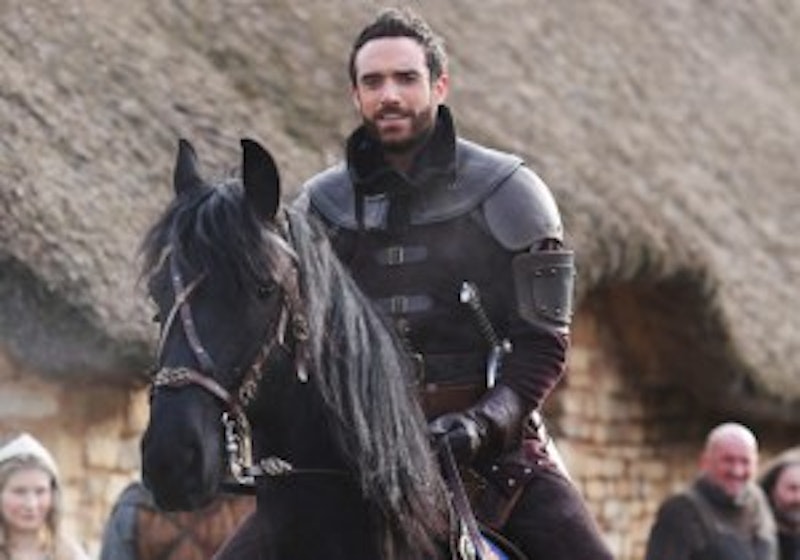 Given the recent network upfronts, we're absolutely drowning in trailers for brand new TV shows, so much so that they all sort of start to blend together. Family sitcoms, prestige dramas, rom-coms, when it comes to TV, there's not a lot that hasn't been done. Which is why the announcement that ABC will be picking up Galavant , a musical comedy set in the middle ages (no, really) is so surprising. Especially given that, aside from Glee, the track record of the TV musical is... um... not great, to put it mildly.

Sure, a lot of shows have gotten away with musical episodes ( What's up, Scrubs , Daria, and, famously , Buffy ), but as far as shows that routinely feature characters periodically bursting into song go, the pickings are slim, and, often, not very good. While Galavant seems like it could go either way at this point (watch the trailer and see what you think, but I am inclined to hope that it will be campy, silly fun, especially given the pedigree of the creative team), it's doubtful that critical expectations will be very high, considering the volume of musical shows that have, well, absolutely tanked.

Here is a definitive ranking of musical TV shows, from most to least successful- we'll just have to wait and see where Galavant will fall on this list!

The be-all end-all of the successful television musical, Glee is now heading into its sixth season, and while its quality has certainly waned in the last few years, it's still an undeniable, monster success, that has turned its once-unknown stars into bona fide A-listers and creator Ryan Murphy into one of the reigning kings of television.

At the height of Glee-mania, NBC debuted Smash, a musical TV show about putting on a musical Broadway show. It premiered to largely positive reviews, but as the show progressed and buckled under the strain of its own premise, the audience began to thin out. Instead of becoming a runaway Smash, the show was cancelled after two seasons.

Despite running for only 22 episodes, the charming and hilarious Flight of the Conchords garnered a devoted cult following, and launched its titular creators and stars on to even bigger things (for example: can you say "Academy Award Winner Bret McKenzie"?)

That's right, there was a TV show based on the hit 80s film Fame, and despite critical praise, it never quite found its footing on network television. It was cancelled and resuscitated in various forms (one syndicated run even cut out the musical numbers) between 1982 and 1987, before America ultimately decided they'd rather just watch the original movie on repeat instead.

Blackpool, a musical dramedy about a murder investigation in a British seaside resort town, was originally aired on the BBC as a mini-series starring none other than David Tennant. The American adaptation, Viva Laughlin (you might remember the relentless ads that aired during the 2007 Superbowl) fared less well, premiering to terrible reviews and dismal viewership. It was cancelled after 8 episodes.

The Mighty Boosh finds itself so low on this list due only to the fact that most people have never heard of it- otherwise, it's a bizarre, beautiful, and rare gem of a comedy show which has a formidable cult following in the U.K.. Despite a North American tour and a run on Adult Swim, the Boosh never quite found fame and fortune in the U.S.

Eli Stone- or, as most of us know it, "Hey, remember Eli Stone?"- was that show about the lawyer who wasn't sure if he was going crazy or being visited by God. Also, he could talk to George Michael, who sang in his head? I don't really remember, but neither does anyone, which is why good reviews weren't enough to save this strange bit of TV history.

The holy grail for enthusiasts of schlocky TV, Cop Rock is a baffling, one-season experiment in just how many different ways a single show could fail. The answer is every. It is possible for a show to fail in every single way. Just... just YouTube Cop Rock and find yourself amazed at how possible it is to both loathe and be magnetically compelled toward something.

More like this
The 'Glee' Cast Isn’t Happy About 'The Price Of Glee'
By Jake Viswanath
Taylor Swift Visited The 'Glee' Set For This Bizarre Season 5 Episode
By Grace Wehniainen
The Jonas Brothers' New Album Has A Very Meta Name
By Alyssa Lapid
Cruz Beckham Teased New Music With An Adorable Nod To Mom Victoria Beckham
By Stephanie Topacio Long
Get Even More From Bustle — Sign Up For The Newsletter
From hair trends to relationship advice, our daily newsletter has everything you need to sound like a person who’s on TikTok, even if you aren’t.