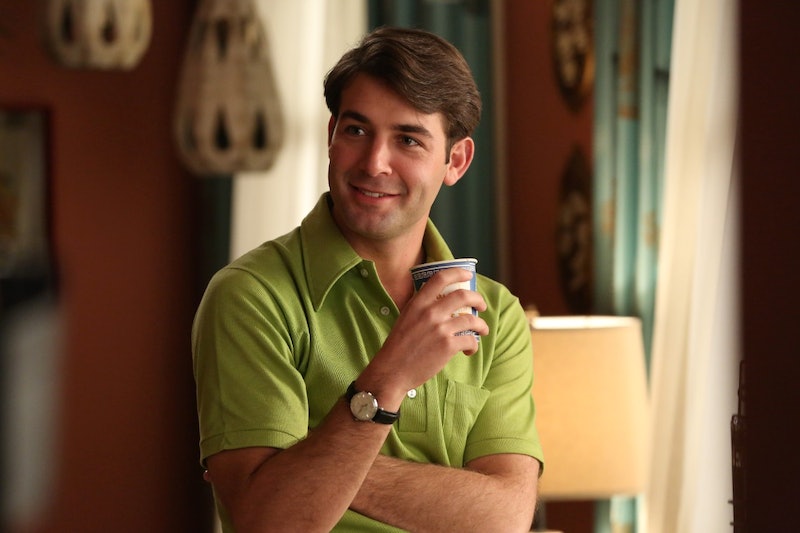 So, Bob Benson (James Wolk) isn't a government spy. Or a murderer. Or, as I've long suspected, a homeless man with "nowhere to go" but an ad agency's office that he managed to sneak his way into with little more than a suit and jaunty haircut.

Instead, according to Sunday night's Mad Men, Bob's big secret is that (drumroll) he's gay. Or just a spy, murderer, or homeless man who is incredibly sly.

Which is why we can only hope there continues to be more to Bob's story. That Bob won't simply be the anti-Sal who proves times are a-changin' in these swinging '60s. That, underneath that upbeat exterior is complex character with more motivations than success and his next lay. (We've got enough of that around Sterling Cooper Draper Pryce Cutler Gleason and Chough.)

No, in order for the Bob Benson mystery to pay off, he cannot be boiled down to a gay man trying to bring down a rival with romance. For one, we've had enough bad gay guys in pop culture history. (Why, hello there Buffalo Bill.) But mostly because it would be too easy an out. We've known from Episode 1 of Season 6 that something was different about Bob. It simply wouldn't feel right to have that different thing to be his sexuality. Perhaps the idea makes me feel guilty as a progressive television watcher, or perhaps the violence and chatter surrounding this season has just been ramping up to something much bigger. Something we haven't already seen back in Season 3.

Don't get me wrong — I'm still deeply interested in the Sal storyline, and have hoped that Bryan Batt's days on Mad Men haven't come to a complete close. But, considering Season 6 has been a season full of holy fuck moments — Abe's stabbing, Betty and Don's reunion, Sally's discovery, etc. — to have Bob's storyline come to a close with a shrug would be more disappointing than a night waiting up for Don Draper. Instead, let's hope by the season's end, Matthew Weiner delivers us a twist that has us continuing to ask, "What About Bob?"