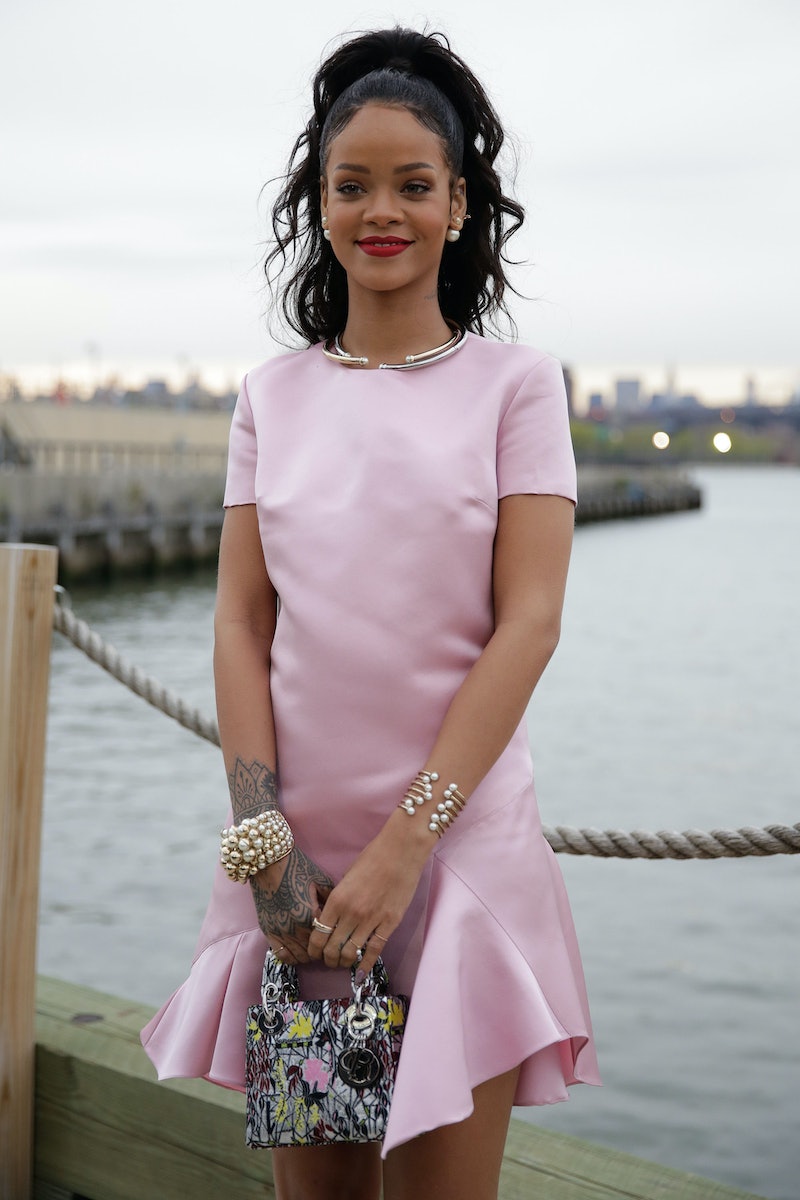 Being a celebrity, you have to decided if you're going to totally censor yourself and be the good, role model-type or just totally be yourself and make fun of shit on social media because that's what you think it's for. One celeb, who definitely chose the latter is Rihanna. She really lets it all hang out online (literally and figuratively) and that includes making fun of fans' odd clothing choices. Rihanna made fun of a 16-year-old's "prom bat" outfit. Now I know that a "prom bat" outfit sounds worthy of being made fun of, but Rihanna really crossed the line with this one. Especially since the fan was wearing almost the exact same thing that Rihanna once wore.

The high school student, Alexis Carter, fell in love with an Alexandre Vauthier jumpsuit Rihanna wore to an event in 2010. She told her local Fox station in Baltimore, "I was like, 'Oh my God, I love this outfit, I wanna go with this outfit let me go show my mom,' and I was like, 'Mom, mom, mom, I wanna wear this, it's cool, I love it, oh my god.'" Obviously, she was very excited and had a friend of her family recreate the outfit.

When she wore the outfit, it was well accepted. "Everybody was saying, 'Oh my god, I love it. It looks nice. Your body looks good. It's different." But the next day a photo of Carter posing in the outfit with her arms open wide began spreading on social media and the hashtag #prombat was born.

Just so you know what we're dealing with here:

Now is that the best choice of pose? Probably not. And if her friends in person had been like, "Oooh, girl! You look like a bat, you should stop posing like that." She probably would've laughed it off and moved on. Unfortunately, we live in a terrifying world where people take other people's photos and post them on Twitter and say they look the Wu Tang symbol (fitting, but come on you guys) and even more unfortunately for Carter, the exact person she was emulating got in on it.

Rihanna knows that she's insanely famous and knows that this girl was just trying to be like her, so she had to know that this was going to get back to her. As tempting as it is to poke fun at someone online, it really isn't that hard to hold back. What harm would it have been to Rihanna to just not push the "Tweet" button? She could still laugh at the photo all she wanted (which is still messed up seeing as she wore the same outfit), but just not do it publicly where she could hurt someone's feelings.

In this case, it isn't about not being able to express yourself online as a celebrity, so much as it is about not doing things that you know will offend someone. Think before you tweet, people.