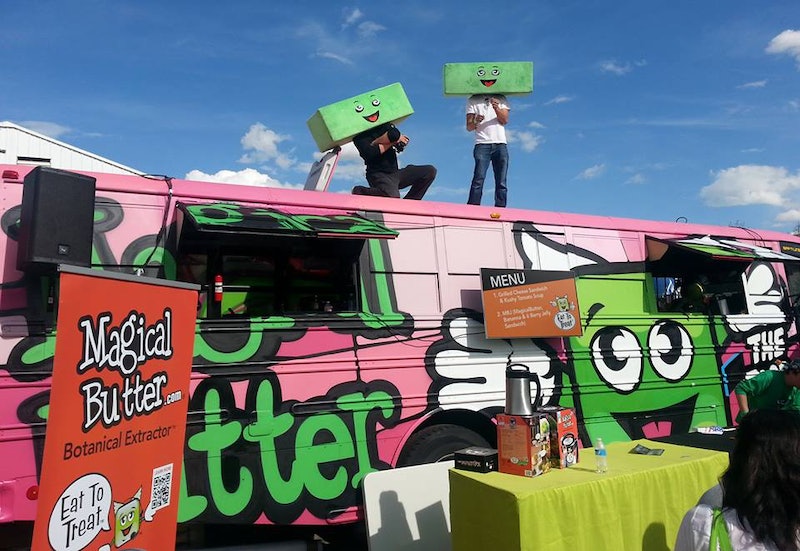 It’s official. We now live in a world where purchasing pot-infused grilled cheese sandwiches out of a truck is a a real possibility. Cannabis-craving ladies and gentlemen, meet the MagicalButter marijuana food truck. As reported by NPR, MagicalButter, a company that sells a device that turns “botanicals” into butter, oil, and lotion, is now getting into the food truck craze with their THC-enhanced treats.

The Samich Truck (an acronym for Savory Accessible Marijuana Infused Culinary Happiness), is a pimped out school bus with the company's mascot (a cheery, green stick of butter) plastered on it's side. It made its first appearance at the U.S. Cannibus Cup in Denver on April 19-20 (obviously). And the menu? Unlike the half-burned, wrapped-in-foil brownies usually associated with the word "edible," the folks at MagicalButter have a different idea of what consuming marijuana should be like.

According to The Cannabist, the Samich Truck's menu includes treats like a sunbutter and jelly sandwich, a take on the Vietnamese classic Bahn Mi sandwich, a grilled cheese sandwich and tomato soup — all of which are prepared with butter and oil infused with marijuana. Garyn Angel, magicalbutter.com's CEO and the Samich Truck's executive chef, explains for the Cannabist what his intentions were behind the venture:

The idea with the food truck: We don’t just make butters and oils and tinctures, we make five-star foods and decadent meals with cannabis. But that got us thinking: How do we bring that to people and show them there’s more than brownies and cookies? We make them a Caprese salad with a delicious dressing and educate people on how to cook with cannabis, especially medical patients.

Angel’s plan is to turn the Samich Truck into a franchise with permanent locations, starting in Seattle, and then hopefully in Florida and California as well. Though they’re not licensed to open their first location in Seattle yet (don't worry, it’s in the works), you can try a few recipes on your own in the meantime, courtesy of magicalbutter.com.