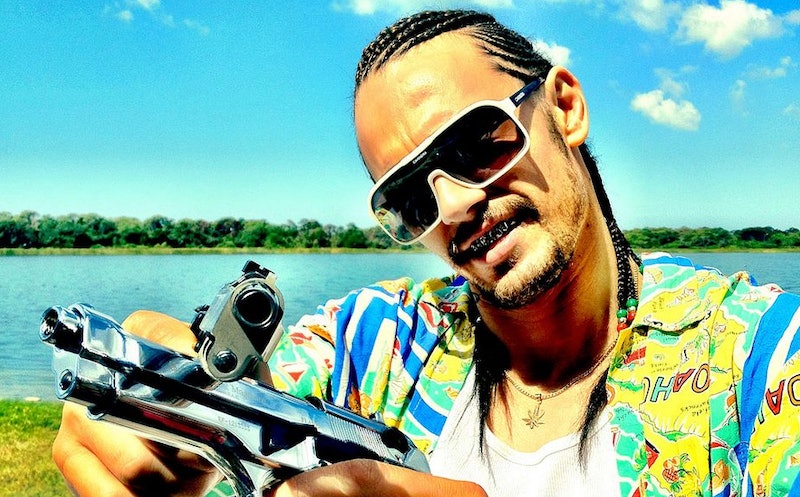 It might be easier to construct a list of people James Franco hasn't triggered a side-eye in these past few months/years than those he has. The latest people he's pissed off are Chris and Roberta Hanley, producers of the Franco-starring Spring Breakers and of that Spring Breakers sequel Franco said would "be a terrible film." Once again, someone finds a pretty legit reason to be cheesed off at James Franco. Franco posted (surprise!) a selfie on Instagram Wednesday, accompanying it with a lengthy caption explaining his distaste for Spring Breakers: The Second Coming. Here's a bit of that gem:

I want everyone to know that whoever is involved in the sequel is jumping on board a poison ship. It will be a terrible film, with a horrible reason d’être: to make money off someone else’s creativity. Can you imagine someone making the sequel to “Taxi Driver” without Scorcese and DeNiro’s consents? Insanity! I’m speaking up for Harmony and his original vision and for any creative person who cares about preserving artistic integrity.

Before your eyes roll dangerously far back into your head at that self-comparison to Robert DeNiro, hold up: The Hanleys have beat you to it. Here's what Chris Hanley told Variety, reportedly while laughing:

Let’s see if I can remember all of the sequels James has done. The Great and Mighty Oz, Spider Man, Planet of the Apes. [...] And he’s pushing hard to help set up the Pineapple Express sequel. I guess he thinks only ‘too big to fail studio films’ are the artistically valid ventures.

Oh, snap! An accusation of selling out, leveled against James Franco, the hipsteriest frequent franchise star! Someone get the Aloe Vera.