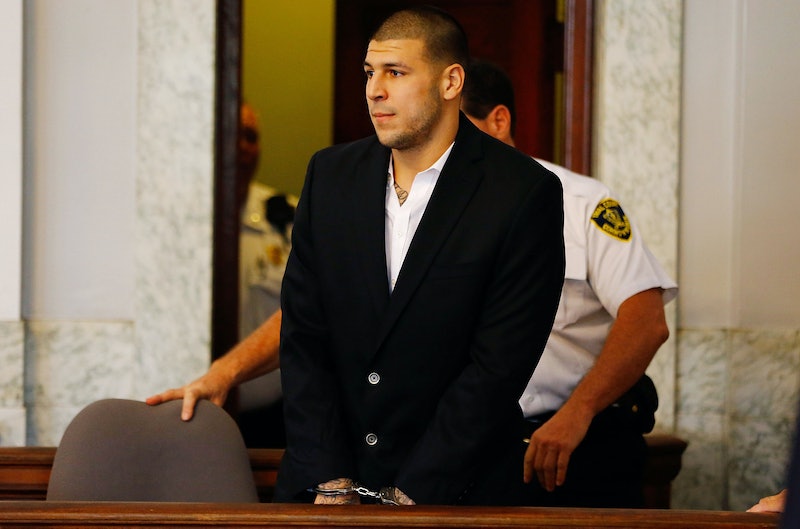 On Thursday, former New England Patriots tight end Aaron Hernandez was indicted in the July 2012 murders of two Boston men. The allegations come one year after he was charged with the murder of another man, Odin Lloyd, in 2013. While only 10 days passed between Lloyd's murder and Hernandez's arrest, the football star played an entire NFL season after the alleged 2012 deaths. And the show that Hernandez put on — as a celebrated football star, for an entire year — make Hernandez's indictment even more eerie.

Right now, Hernandez is in jail for the murder of Lloyd, a death law enforcement are still investigating to determine whether there's a link to the 2012 murders. The two deceased men — Daniel Abreu, 28, and Safiro Furtado, 29 — were at Cure nightclub in Boston when they had a "chance encounter" with Hernandez, which allegedly led to the NFL star fatally shooting them while they were waiting in their car at a traffic light.

The investigation is ongoing, and more details are likely to emerge. In the meantime, here's a timeline of all the craziness so far, including an entire year of praise and adoration as Hernandez helped lead the Patriots to the AFC Championship game.

Florida tight end Aaron Hernandez is drafted in the fourth round of the 2010 draft by the New England Patriots. Hernandez slips to a fourth-round pick after an ominous scouting report details multiple failed drug tests for marijuana use at Florida. Hernandez catches 45 passes for 563 yards and six touchdowns as a rookie.

In his second season, Hernandez switches to his college number, 81, and makes 79 catches for 910 yards and seven touchdowns, clinching him a spot in the Pro Bowl. He also helped the Patriots have an undefeated regular season, but they lose the Super Bowl 21-17 to the New York Giants.

Around 2:12 a.m., a gunman in a silver-gray SUV with Rhode Island plates allegedly start shooting at another vehicle stopped at a South Boston intersection, killing Furtado and Abreu. A third passenger in their car is wounded, and two other passengers escape uninjured.

Fellow tight end Rob Gronkowski is at the center of media attention for his off-season antics (including dancing shirtless in Vegas). When Hernandez is asked to comment, he comes to his defense.

However, when reporters asked about how his own summer went, Hernandez responds, "That’s still private ... next question." This was 11 days after Abreu and Furtado were murdered.

In a rare display of affection from Bill Belichick, the Patriots head coach plants a kiss on Hernandez's elbow after he appeared to hurt it during a drill.

“I had a little bruise on my elbow and I was whining about it, and he was just showing me the love of a father figure and he gave me a kiss on the elbow,” Hernandez told the Boston Globe.

Hernandez signs a five-year, $41 million contract extension with the Patriots, marking the second-biggest contract for a tight end in NFL history. The contract also included a $12.5 million signing bonus, the largest ever given to a tight end.

Hernandez immediately donates $50,000 to a Patriots charity, an act that team owner Robert Kraft told the Globe was "one of the touching moments since I’ve owned the team."

Hernandez and his fiancé, Shayanna Jenkins, welcome their daughter on his 23rd birthday. Hernandez tells the Boston Globe : "It definitely changed my life and I’m going to look at things differently. I’m engaged now, I have a baby, and it’s just going to make me think of life a lot differently and doing things the right way. I can’t just be 'young and reckless Aaron' no more."

Odin Lloyd, a linebacker for the semi-professional Boston Bandits, is driven to an industrial park one mile from Hernandez's house and shot to death.

Reports come out that Hernandez was being questioned by the police as they investigate the possible homicide of Lloyd. Early sources report that the tight end is not considered a suspect.

Hernandez is arrested and charged for the first-degree murder of Lloyd. He is released by the Patriots just 90 minutes after his arrest.

Hernandez is indicted on the charge of first degree murder and faces life in prison.

While awaiting trial for his murder charge, Hernandez reveals that life in prison isn't all that bad. "I’m way less stressed in jail than when I was out of jail," Hernandez wrote in a two-page letter to a friend. "I’m just anxious to go to trial to see what’s up and prove my innocence." He added that he'd read 25 books since being incarcerated, and that he was "using this time to become strong, wiser and trying to come out, when I come home, way more intelligent, which I will."

More like this
Jake Daniels Just Became The UK’s First Active Football Player To Come Out As Gay Since 1990
By Sam Ramsden
The Music Industry Continues To Fail Black Women
By Precious Adesina
Watch Pete Davidson Rescue Kim K As She Struggled To Walk Up The Met Gala Stairs
By Jordyn Tilchen and Bustle Editors
How To Fight For Reproductive Rights, Based On How Much Time You Have
By Courtney Young
Get Even More From Bustle — Sign Up For The Newsletter