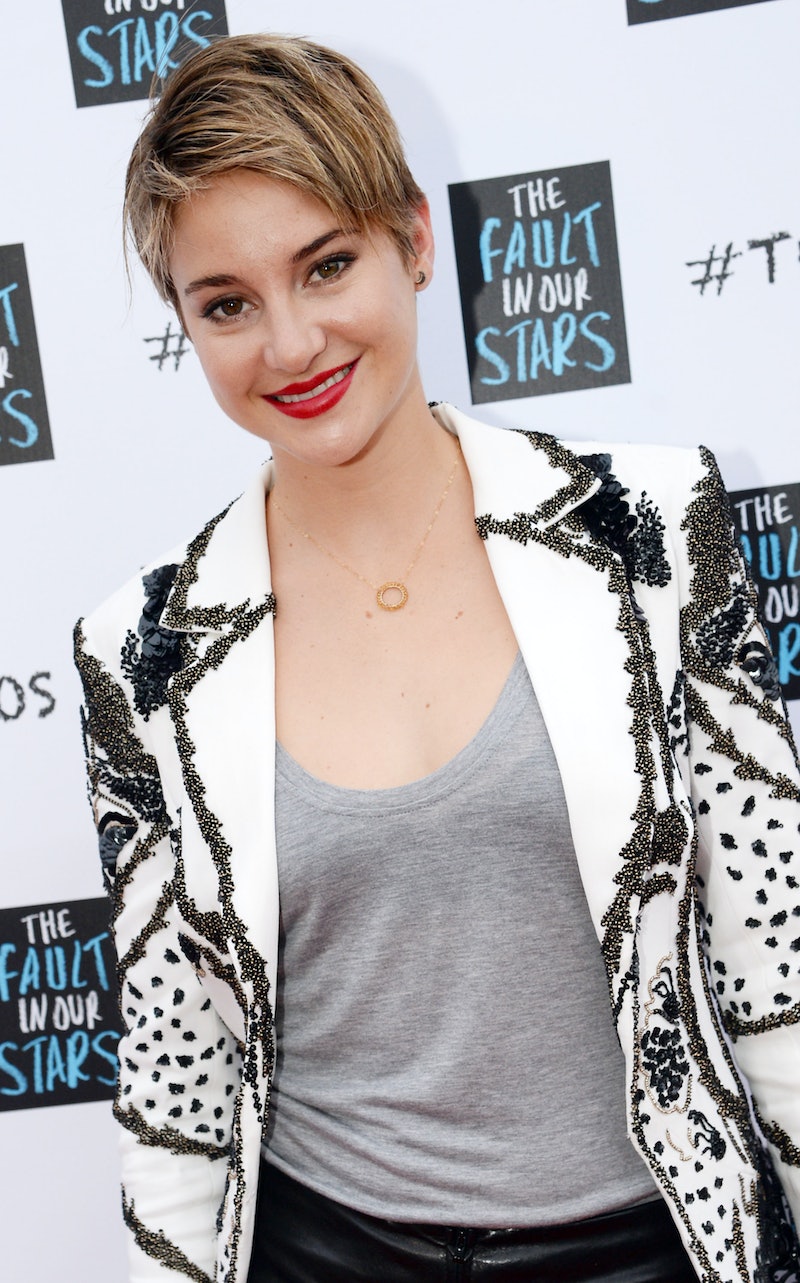 Like most of us, Shailene Woodley is a big fan of George Clooney. She's talked often about her admiration for her Descendants co-star, calling him one of her "favorite human beings" and a "truly genuine giver" for all his philanthropic work. Earlier this year, she even referred to Clooney as her "second dad," adding that she's constantly "learning through his actions" – and, according to a new interview, she's copying them, too. While promoting The Fault in Our Stars on Jimmy Kimmel Live, Woodley revealed that she's living out of a suitcase, just like her one-time movie dad's character seemingly advised in Up in the Air.

"How much does your life weigh?" Clooney's character, Ryan Bingham, famously said in the acclaimed 2009 film. A lone wolf and an in-demand speaker, Bingham advised his audiences to imagine stuffing their entire lives — houses, clothing, electronics — into a backpack, and then try to walk. "It's kinda hard, isn't it?" He then told his listeners that far too many people weigh themselves down until they can't move, and "make no mistake, moving is living." So Bingham (metaphorically) set that overly heavy backpack on fire, and told the audience to imagine waking up without it, an "exhilarating" feeling of total freedom.

Woodley may not have total freedom, but, as she revealed on Thursday, she's about as close as it gets. While On Kimmel, the actress said that she can fit nearly all of her possessions into a carry-on suitcase, save for a few kitchen items she lent to her grandma. The reason? She wants to keep moving, and be able to couch-surf between friends' houses without all her material items weighing her down.

"It's so refreshing, and it takes so much stress away," she said.

Woodley added that although she owns a laptop and a (temporary) phone, she only carries a few articles of clothing, just a pair of jeans, a hoodie, and a few T-shirts. In other words, she's the real-life version of Ryan Bingham, a person who believes that less is more, being weighed down is the worst, and that an empty-ish backpack makes for a stress-free life. Hey, wasn't the point of that movie that Bingham's advice wasn't to be taken to heart, and that having relationships/material items/lives that weigh more than what can fit in a backpack are good? Next time Woodley wants to take Clooney's advice, she might want to watch his movies in full before following their words of "wisdom" so closely.

And compare it to Clooney's Up in the Air speech: