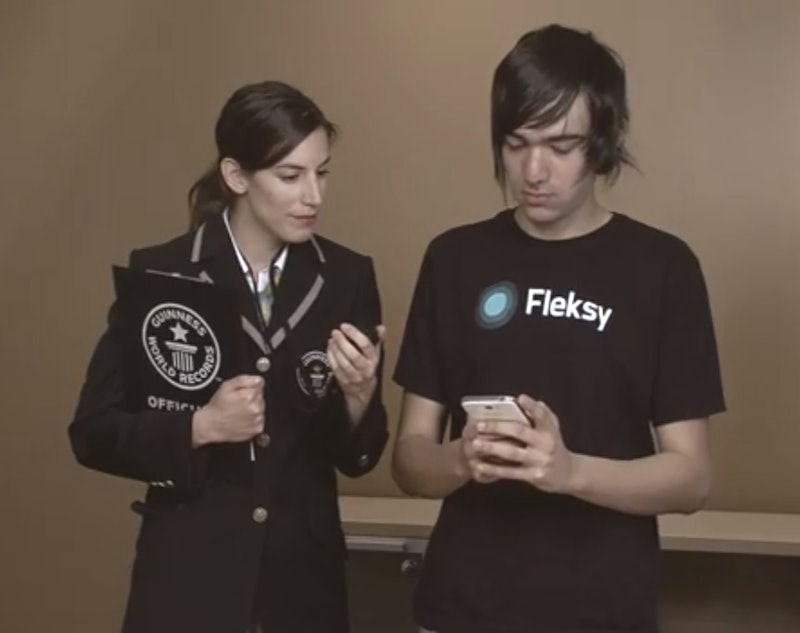 The folks over at Guinness World Records have just officially named the World’s Fastest Texter and — spoiler alert! — it’s a teenager. A 17-year-old teen in New York City has earned the title by perfectly typing a 26-word message in just 18.19 seconds on a touch-screen mobile.

Marcel Fernandes Filho beat the previous champion’s record of 18.44 seconds by texting the following sentences, quickly and with no autocorrect useage, typos or punctuation mistakes: “The razor-toothed piranhas of the genera Serrasalmus and Pygocentrus are the most ferocious freshwater fish in the world. In reality they seldom attack a human.” Yeesh…I can barely say that, let alone type it that quickly.

So how exactly did Filho get his world-famous texting skills? According to CNET, it all started back in 2009 when he took a hammer to his Dell desktop because the monitor was “flickery.” It was probably an unnecessarily violent overreaction, but because he didn’t have money to buy a new computer, he then had to resort to using his iPhone for everything.

All those years of practice culminated in him breaking the record this year on Samsung Galaxy S4 fitted with a Flesky touchscreen keyboard. (Sidenote: how happy do you think these companies are right now? Flesky has already made a commercial about it, seen below.)

But don’t peg Filho as one of those teens who refuses to ever look up from his cell. He also wants everyone to know he’s currently studying physics in UFSC, a college south of Brazil. I wonder if he even bothers to use an actual computer for his homework?