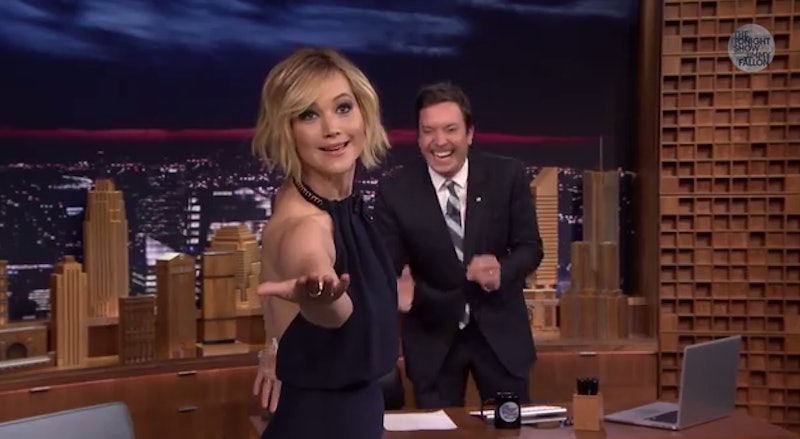 If you saw J.Lo at a party, and you were quite tipsy, would you want to dance with her? Heck yes, you would! And Jennifer Lawrence feels exactly the same way. On The Tonight Show With Jimmy Fallon Thursday night, Jennifer Lawrence explained attempting to dance with Jennifer Lopez and it didn't go as she planned. In fact, Lopez denied Lawrence's invitation altogether. Come on, J.Lo! You couldn't even give her a little shimmy?

Lawrence's opportunity of a lifetime arose when she was at a party with Fallon and they came up with the idea to attempt to dance with Lopez after spotting her across the room, according to Lawrence at least. Fallon says it was all her idea. Lawrence said, "This was like ten Jell-o shots in and I've never done Jell-o shots, I didn't go to college." Apparently, Lawrence and Fallon came up with a plan where they would spin around, hold out their arms to J.Lo and say, "Dance with us!" Unfortunately for Lawrence, Fallon ditched the plan at the last minute leaving Lawrence awkwardly having to chance the invitation to "Dance with... me."

Lawrence didn't get the response she hoped for from her fellow Jennifer. Lopez told her, "I think I'm just gonna observe." Ouch! That is cold!

It sounds like Fallon had a pretty good excuse for leaving Lawrence on her own, but Lawrence doesn't really forgive him saying, "You made me look like a freak in front of J.Lo. Do you know what that feels like?!"

Check out the video for yourself for Fallon and Lawrence's reenactment oand so you know what not to do if ever given the opportunity to ask Jennifer Lopez to dance.