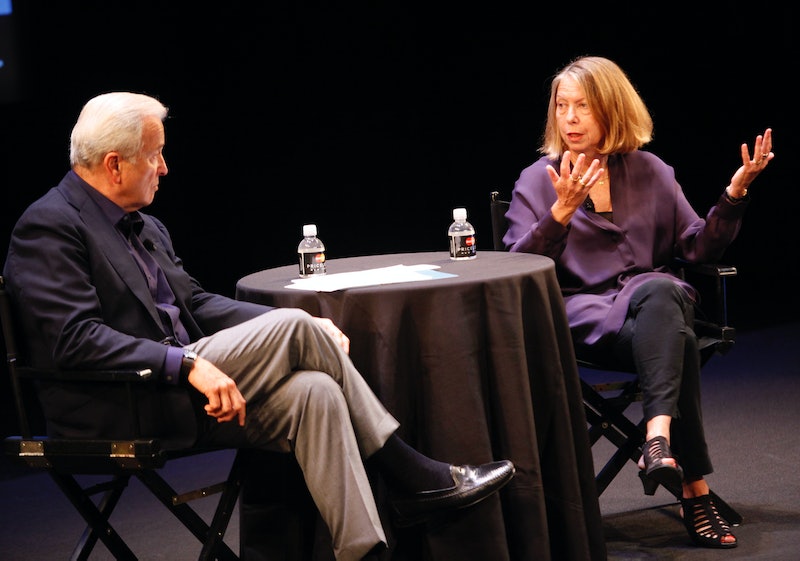 The controversy over the New York Times’ firing of executive editor Jill Abramson doesn’t look like it’ll be dying down any time soon. On Sunday, Times president and publisher Arthur Suzlberger Jr. released a statement defending Abramson’s ouster, and denied that the decision had anything to do with Abramson’s salary, the gender pay gap, or anything other than her job performance. Sulzberger’s statement is defensive and full of denials, but it’s not going to mollify anyone who suspects, as has been reported, that Abramson was fired for asking to be paid as much as her male predecessor.

“Perhaps the saddest outcome of my decision to replace Jill Abramson as executive editor of The New York Times is that it has been cast by many as an example of the unequal treatment of women in the workplace,” Sulzberger wrote. “Rather than accepting that this was a situation involving a specific individual who, as we all do, has strengths and weaknesses, a shallow and factually incorrect storyline has emerged.”

Even if Sulzberger’s account of events is true, it seems a bit tone deaf to suggest that people criticizing the Times is the worst thing to result from this episode. In any event, Sulzberger claims that Abramson’s pay package “was comparable with Bill Keller’s,” and that the goal of pay equality isn’t advanced by citing “the case of a female executive whose compensation was not in fact unequal.”

But that doesn’t jibe with the New Yorker’s reporting on the matter, which found that Abramson was getting paid less than Keller:

As executive editor, Abramson’s starting salary in 2011 was $475,000, compared to Keller’s salary that year, $559,000. Her salary was raised to $503,000, and—only after she protested—was raised again to $525,000. She learned that her salary as managing editor, $398,000, was less than that of the male managing editor for news operations, John Geddes. She also learned that her salary as Washington bureau chief, from 2000 to 2003, was a hundred thousand dollars less than that of her successor in that position, Phil Taubman.

It’s worth nothing that total compensation consists of more than just a salary, so maybe Abramson’s total pay package (including things like bonuses and stock grants) was actually equal to Keller’s. But in describing Keller and Abramson’s respective compensations, Suzberger keeps using the word “comparable,” which is slippery and subjective, and still leaves room for the possibility that Abramson was, on the whole, getting paid less than Keller due to her gender.

Perhaps the saddest outcome of my decision to replace Jill Abramson as executive editor of The New York Times is that it has been cast by many as an example of the unequal treatment of women in the workplace. Rather than accepting that this was a situation involving a specific individual who, as we all do, has strengths and weaknesses, a shallow and factually incorrect storyline has emerged.

Fueling this have been persistent but incorrect reports that Jill’s compensation package was not comparable with her predecessor’s. This is untrue. Jill’s pay package was comparable with Bill Keller’s; in fact, by her last full year as executive editor, it was more than 10% higher than his.

Equal pay for women is an important issue in our country – one that The New York Times often covers. But it doesn’t help to advance the goal of pay equality to cite the case of a female executive whose compensation was not in fact unequal.

I decided that Jill could no longer remain as executive editor for reasons having nothing to do with pay or gender. As publisher, my paramount duty is to ensure the continued quality and success of The New York Times. Jill is an outstanding journalist and editor, but with great regret, I concluded that her management of the newsroom was simply not working out.

During her tenure, I heard repeatedly from her newsroom colleagues, women and men, about a series of issues, including arbitrary decision-making, a failure to consult and bring colleagues with her, inadequate communication and the public mistreatment of colleagues. I discussed these issues with Jill herself several times and warned her that, unless they were addressed, she risked losing the trust of both masthead and newsroom. She acknowledged that there were issues and agreed to try to overcome them. We all wanted her to succeed. It became clear, however, that the gap was too big to bridge and ultimately I concluded that she had lost the support of her masthead colleagues and could not win it back.

Since my announcement on Wednesday I have had many opportunities to talk to and hear reactions from my colleagues in the newsroom. While surprised by the timing, they understood the decision and the reasons I had to make it.

We are very proud of our record of gender equality at The New York Times. Many of our key leaders – both in the newsroom and on the business side – are women. So too are many of our rising stars. They do not look for special treatment, but expect to be treated with the same respect as their male colleagues. For that reason they want to be judged fairly and objectively on their performance. That is what happened in the case of Jill.

Equality is at the core of our beliefs at The Times. It will always be.

More like this
34 Quotes That'll Inspire You On Juneteenth & Beyond
By Syeda Khaula Saad and Siena Gagliano
How 5 People Upended Their Lives To Fight For Abortion Rights
By Hannah Smothers
How To Fight For Reproductive Rights, Based On How Much Time You Have
By Courtney Young
Boris Johnson’s Leadership Is In Question – Again
By Bustle UK
Get Even More From Bustle — Sign Up For The Newsletter