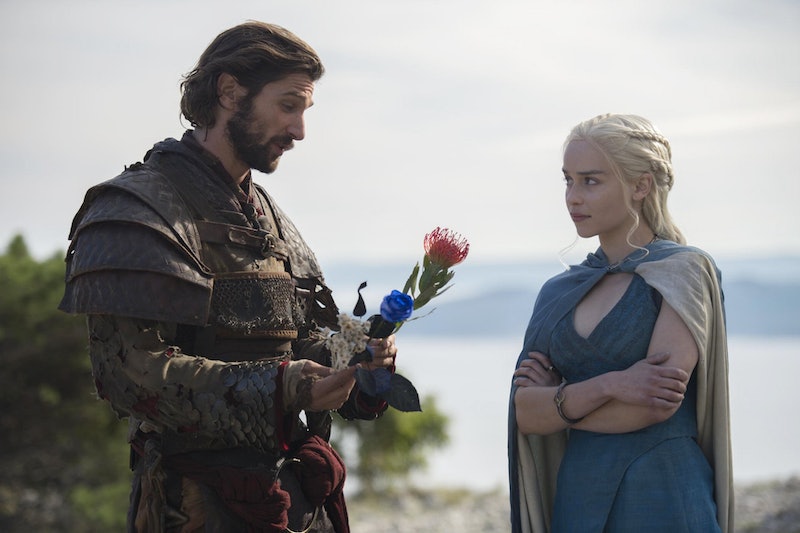 Since the beginning of the series, Game of Thrones has been absolutely dripping with sex -- and more bare breasts than anything we've read in the books. Despite all the kick ass feminist moments throughout Game of Thrones, we've yet to really see feminism creep into the series' sexual encounters. Until now. On Sunday's episode, Daenerys & Daario helped to even the score when she used her queenly power to get what she wanted: sex with Daario Naharis.

The scene was only a few seconds long, showed no actual sex, and yet, it's one of the greatest things we've seen on this show. Daario is summoned to Daenerys' bedroom where she quickly cuts to the chase: "Take off your clothes," she commands. As Michiel Huisman's derriere fills most of our screens (finally, some nudity we can get behind) Dany smiles, showing how pleased she is with the specimen before her. Later, Daario leaves and says that the queen "is in a good mood." Yeah, I think I'd be in a good mood too after that scene.

Sure, we've seen other instances of female pleasure on Game of Thrones, but none have given the woman as much power as this scene. It's pretty natural that this came at the hands of Daenerys (who severely needed a little something to spice up her "free all the slaves in Westeros" storyline). She's been our badass queen all along, so why not let her be the one to finally tip the sexual scales a bit?

Of course, one split-second scene of perfection isn't enough to undo all the gratuitous objectification of women on this show — and it especially doesn't help us erase that time Joffrey tortured and killed a prostitute. Game of Thrones will have a hard time bringing that true balance, seeing as it has few opportunities to do so. But we can still take solace in the fact that in this world, women can have just as much power between the sheets as men can. It's just another way that Game of Thrones (in the words of Parks and Recreation's great Ben Wyatt once said) "tells human stories in a fantasy world."

And, of course, on a selfish level, we've been watching Dany make eyes and the new and improved Daario for weeks now. It's only fair that we finally see this lusty relationship come to fruition. And the best part? Dany gets what she wants and goes right back to what she does best: Taking over the damn world. Hell yeah, sister.