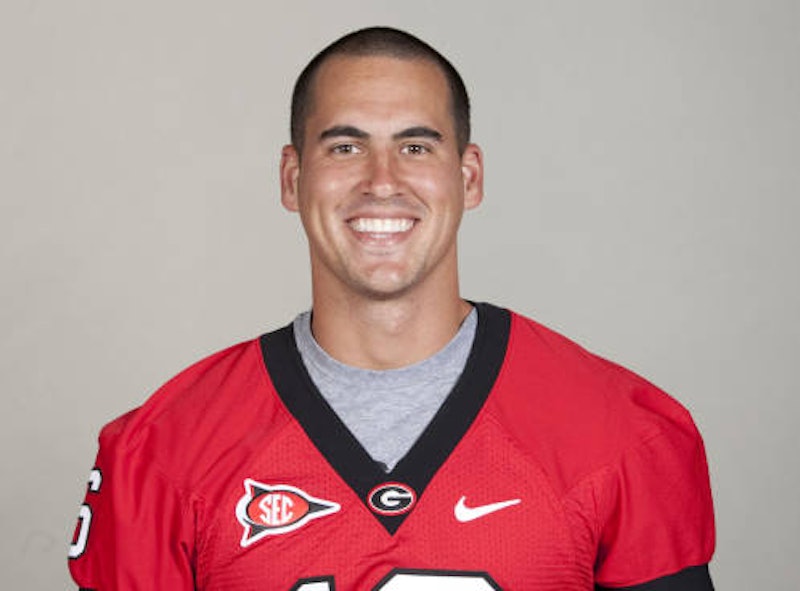 Ladies, get your baseball-related dating metaphors ready: Out of her 25 hopeful guys, Bachelorette Andi Dorfman has a former pro baseball player in her midst, and starting tonight, we get to see him attempt to score a home run in pursuit of Andi's heart. Adorable contestant Josh Murray is actually a professional baseball player, but if Andi's going to do this thing, we need to know whether or not we endorse a relationship with Josh for real. So let's start by figuring out everything about his baseball career, shall we?

Let's just say that while he may have been a professional baseball player, you've probably never seen Josh running the bases on ESPN. He started off playing high school baseball and right after graduation day, he was a second round draft pick to a Milwaukee Brewers' minor league team as a short stop. He didn't actually play for the Brewers, though — instead, he spent five years playing for their farm team the Brevard County Manatees (seriously, Manatees). This means that, as a player, he was "owned" by the Brewers, while actually playing in the minor leagues. He later played third base independently for the Charlotte County Redfish as well.

Later, Josh decided to go to college at the University of Georgia — in Andi's home state, guys — where he played for their baseball team. And also their football team, alongside his brother, Aaron, who played as a quarterback for the Bulldogs and has recently been drafted to the Kansas City Chiefs.

The real good news about this? Andi's dad is a huge fan of UGA football, which means if Josh makes it to that hometown visit, the odds are already in his favor. Take that, Juan Pablo.

Now, let's talk batting averages. According to Josh's Brewerfan.net player profile, his average was around .175 for most of the games he played. I'm told that's really low. Like, phenomenally terrible. This could contribute to the fact that, while still in college, Josh decided to give up the whole baseball thing in favor of a career in finance, and today, he seems to be doing pretty well for himself.

Also noteworthy: Josh's walkup song on the field was "I'm a Hustla" by Cassidy. So let's all allow that to sink in. Then again, it was 2004.

Get ready to step up to the plate on the Bachelorette this season, Josh. I'm sorry. I'm done. I swear.

More like this
Susie Wrote About Choosing "Sun Not Shade" After Clayton & Rachel's 'Bachelor' TikTok
By Grace Wehniainen
Kaitlyn Bristowe Said Chris Harrison Ignored Her After Her 'Bachelorette' Hosting Gig
By Grace Wehniainen
Zach Addressed His "Boring Bachelor Energy" After His Group Date With Latto
By Grace Wehniainen
All The Clues Zach & Christina Are Together After 'The Bachelor'
By Grace Wehniainen
Get Even More From Bustle — Sign Up For The Newsletter
From hair trends to relationship advice, our daily newsletter has everything you need to sound like a person who’s on TikTok, even if you aren’t.