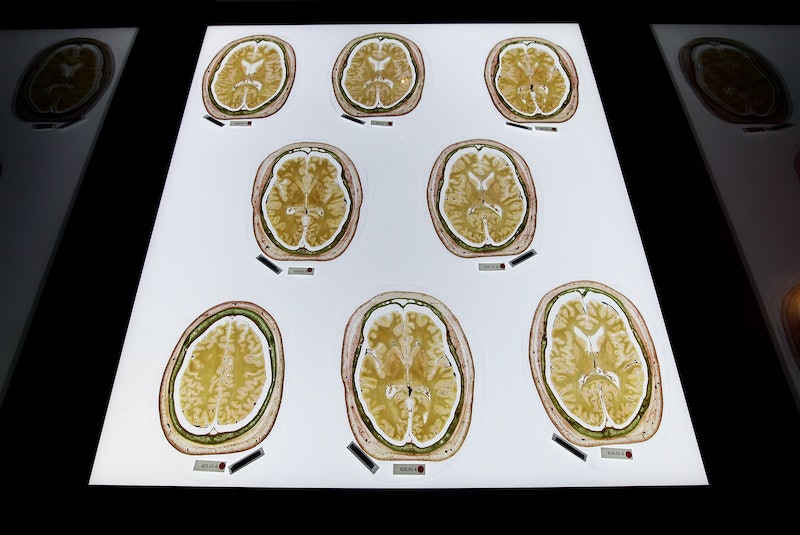 When I was in elementary school, I remember being blown away when I learned that the right and the left sides of the brain control different things. I was always more fond of reading, art, and music than I was of math and science; as a result, I assumed that meant I was right-brained, relying more on the side of the brain that dealt with fantasy and creativity than the side that controlled logic and rationality. But now, a couple decades later (man, I’m getting old), I’ve got the definitive answer, thanks to this nifty little online Brain Test. Ready to find out whether you’re right-brained or left-brained?

In just eight questions, the Brain Test will tell you which side of your brain you predominantly use. There are no right or wrong answers; as the test itself notes in the fine print at the bottom, it’s just a little game that helps us learn more about the way we think. Who knew that how we perceive an optical illusion or which hand we use to touch our heads with could say so much about how our brains are wired? Naturally, I had to take the test (what sort of self-respecting blogger would I be if I didn’t); apparently I’m split right down the middle, with a slight — and I do mean slight — bias toward the right side:

This makes sense; generally I’m a pretty logical person, but I also tend to pursue creative endeavors (I mean, I’m a writer, for Pete’s sake), rather than, say, mathematical ones. I’m much more interested in asking “What if…?” or “I wonder…?” with regards to open-ended topics than to ones with cut-and-dry answers. You know: “I wonder that house at the end of the street came to be abandoned?” Or, “Do you think the cats pretend to be rock stars and run around the house using my hairbrush as a microphone when I’m not home?” That kind of thing.

If you’re curious about the science behind each question, there’s a handy-dandy little explanation you can click on once you get your results that walks you through it all. The dancer optical illusion in question one, for example, will look like she’s turning clockwise if you’re right-brained and counterclockwise if you’re left-brained; meanwhile, when it comes to the questions involving diagrams, the more abstract your answer, the more right-brained you are.

It’s worth noting, though, that the right brain-left brain dichotomy may be a little more complicated than just “creativity vs. logic.” Back in December, NPR spoke with cognitive neuroscientist Kara D. Federmeier about the issue; she told the Cosmos and Culture blog, “One problem with answer this question is that we would first have to agree on what ‘logical’ and ‘creative’ even mean.” She went on to say that math skills tend to get their power from both sides of the brain, not one or the other: Counting and reciting multiplication tables, for example, get a boost from the left side, while the right brain is useful for estimating the quantity of a set of objects. Furthermore, researchers from the University of Utah employing brain imaging found in April of 2013 that people don’t use the right sides of their brains any more than the left sides, or vice versa. “It’s absolutely true that some brain functions occur in one or the other side of the brain,” researcher Jeff Anderson, M.D., Ph.D., said in a statement. “Language tends to be on the left, attention more on the right. But people don’t tend to have a stronger left- or right-sided brain network. It seems to be determined more connection by connection.” So, y’know… do with that what you will.

In the meantime, though, the Brain Test is still a fun way to spend a few minutes. Go give it a shot!

More like this
These Are The 3 Most Mellow Zodiac Signs
By Kristine Fellizar
Here's How Long You Should Hold A Stretch
By Carolyn Steber
The 5 Best Pillows For Acid Reflux, According To A Sleep Expert
By Maria Cassano
69 Great Gifts For Guys No Matter What Their Hobbies Are
By Teresa Newsome, Mia Mercado and Brittany Leitner
Get Even More From Bustle — Sign Up For The Newsletter