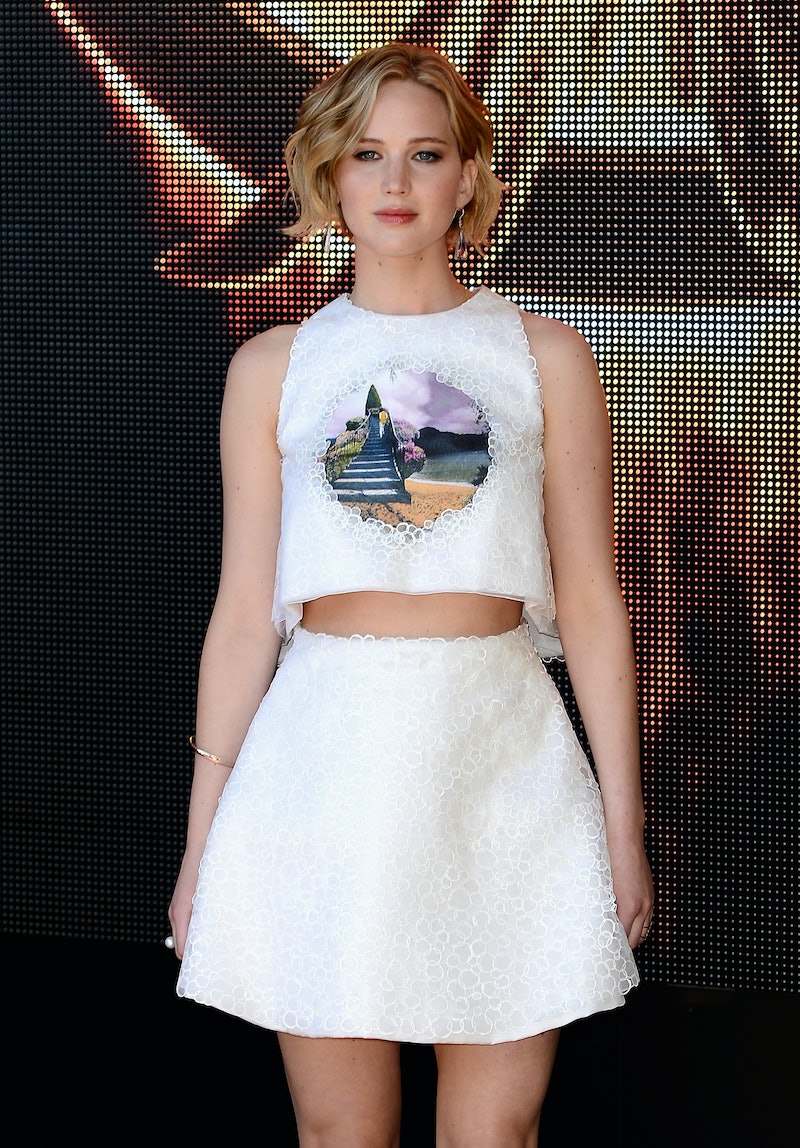 Hiccups are absolutely horrible and everyone has their own cure — holding your breath, drinking water and counting to ten, focusing on the hiccups themselves — but Jennifer Lawrence's just might be the strangest one I've ever heard. Jennifer Lawrence got hiccups at Cannes and everyone broke into a frenzy in an attempt to help her hiccup cure process go smoothly. A Variety reporter saw the entire thing go down and it sounds pretty damn intense.

Lawrence was at Vanity Fair's Cannes party and upon realizing she had the hiccups (Side note: I've just realized I'm writing about J. Law's hiccups. Didn't see that coming when I woke up this morning.), Lawrence asked for some water and everyone immediately devoted themselves to finding that water as if their lives depended on it. Explosions went off. People threw themselves off of bridges. Dogs and cats starting running through the streets. A second sun appeared in the sky. The end was nigh.

Or, as Variety explains the situation,

"I have the water but I need a glass!" said one harried male Lionsgate handler, rushing toward Lawrence with an Evian glass bottle about a third of the way full. "No glass, she'll just chug it from the bottle," said a woman from Lionsgate who seemed to be a JLaw authority.

Shit was getting real, you guys.

Lawrence said that there is one way she always gets rid of her hiccups. "The only thing that ever works for getting rid of hiccups for me is when I drink water and raise my arms over my head and lower them very slowly." If you're wondering how she can lower both of her arms and drink water, there is a simply solution for that: Josh Hutcherson. "He raised the bottle to her lips. Lawrence put her arms up straight, and the ritual began."

Apparently, Lawrence lowers her arms so slowly that the entire thing took about two minutes. To me, the most impressive thing about all of this is being able to drink water that someone else pours into your mouth without laughing. I would never be able to do that. I would've hiccuped water all over Josh Hutcherson's face. This was not the case for Lawrence. "A minute more passed. She and Hutcherson locked eyes and hugged. They'd beaten it."

Oh thank god! Can you imagine if Jennifer Lawrence, Oscar winner at only 22 years old, became one of those people who had hiccups for years? Her career would be over! Maybe that's why everyone was so set on getting her water. They knew they were protecting one of our generation's best actresses.

If you ever have hiccups, it sounds like Lawrence's method might be a good cure as long as you have a lot of self control. And you'll just have to do without Josh Hutcherson.