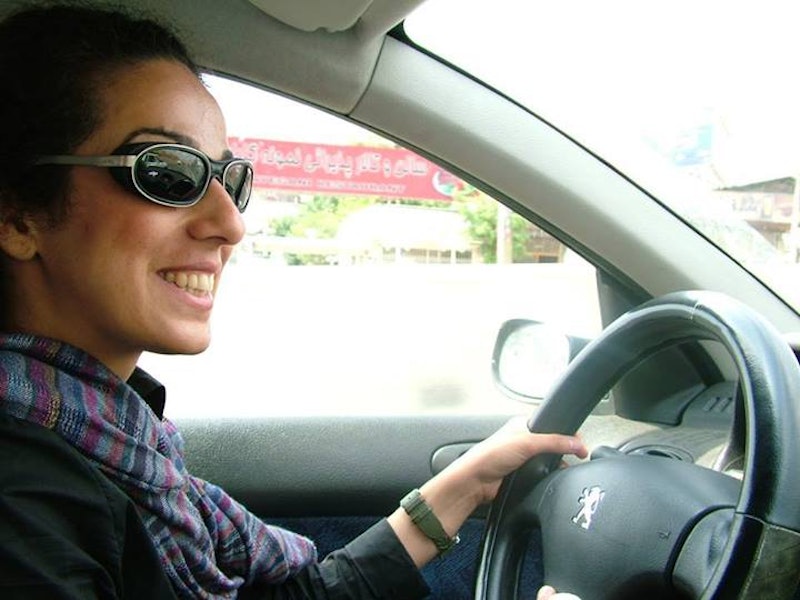 On May 5, Iranian journalist Masih Alinejad posted a photograph of herself on her Facebook timeline. She is behind the wheel of a car, she is grinning, and — most importantly — she is scarf-less, her head free of the hijab that women are required by law to wear in the Republic of Iran. She hashtagged it #MyStealthyFreedom — but she had no idea when she posted it that it would turn into a full-blown movement. After thousands of likes, shares, and comments, though, she knew she had hit upon something big… and she was going to run with it.

Two days later, she created a Facebook page for My Stealthy Freedom, encouraging other women to share their hijab-free moments. The Washington Post reports that within its first two days of existence, 30,000 women posted photos of themselves without their veils, and within two weeks, the page had earned over 200,000 likes. Said Alinejad, “For me, when I was in Iran, taking my veil off was like thumbing my nose at authority, especially the authority that was forced upon me.”

The images are riveting, featuring women of all types and all ages taking back control of their own bodies. “Real freedom does not mean doing whatever we feel like doing; it means being able to do what we have the right to do,” wrote one woman:

“[I] want to do sports. I want to ride on streets on my motorcycle and go to work with it. I want to breathe!!! I want to be counted as human as a man and as free as he is,” wrote another:

“I experienced this freedom in my country for a few minutes, after 33 years. Persian Gulf. I will still be a woman even if you cover me with scarves and Chadors. What are you going to do with my eyes?! They are full of love and life,” said a third:

Human rights lawyer Nasrin Sotoudeh, who spent three years in prison for defending women’s rights, sent in a picture, writing powerfully about her story. “This is rather an ironic term to refer to the current surge of activity that is going on in Iran,” she said. “Because, as we all know, if something is done stealthily, then it cannot be called FREEDOM”:

And yet another — my personal favorite — wrote simply, “My hair and the wind met each other for a few minutes. They might have already made peace again”:

Facebook itself is banned in Iran, but that doesn’t stop its people from using it. Speaking to the Daily Beast, Alinehad said, “It is clear from the response that Iranian women wanted to express themselves and voice their opposition to the compulsory hijab.” Venturing out in public without a hijab can cost women 70 lashes and two months in jail. “I am delighted to have been able to offer a platform for Iranian women to ‘let their hair down,’” she continued.

Learn more about My Stealthy Freedom, including how you can support the movement, on Facebook.

More like this
The 3 Dating Apps Queer Women & Nonbinary Folks Actually Like
By Emma Carey
How To Fight For Reproductive Rights, Based On How Much Time You Have
By Courtney Young
What Is A “Softboy?” The TikTok Term & Aesthetic, Explained
By Courtney Young
Why Are TikTokers Slapping Each Other With Tortillas?
By Courtney Young
Get Even More From Bustle — Sign Up For The Newsletter