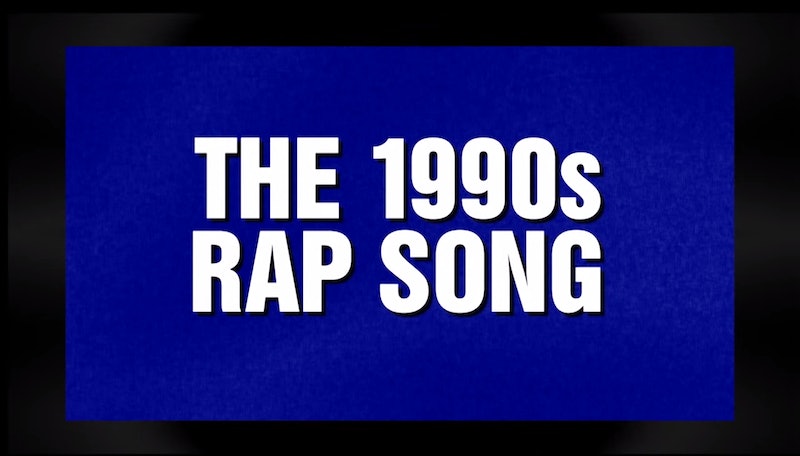 The great thing about watching Jeopardy is that if you watch long enough you will eventually run into at least one question that you can answer. That one question will then be held up as the ultimate example of your intellectual superiority over every Jeopardy contestant who has ever existed. I could win this game so easily, you inevitably end up thinking even though you haven't been able to answer a single question so far besides that one. How did they even let these guys on the show? The '90s rap category on Jeopardy was an entire column of such questions for me.

Admittedly, I was age zero to ten during the '90s, but that didn't mean I didn't have a bomb diggity taste in music. I was whining that parents just don't understand long before Will Smith ever made a song about it. I still know all the lyrics to "Baby Got Back". With a category like "The 1990s Rap Song", Jeopardy was basically inviting me to start bragging about how much more I knew about the world than these adults who knocked out two whole categories before finally making their way over to this one.

In fact, I was riding such a high that I even went so far as to believe that this particular batch of contestants were playing the game wrong. With a category entirely devoted to rap songs, I expected at least one of the following things to happen:

Instead, the three of them just kept playing Jeopardy. Who does that? It's like they don't believe that the '90s was basically the best decade in music, television, and fashion. (Well, maybe not music or fashion, but the '90s definitely had television in the bag. And gave us the Internet as we know it. You're welcome, children of the new '10s.) It's like these contestants cared more about winning money than about celebrating '90s rap. How dare they.

Watch the only Jeopardy category you'll ever need to see below.