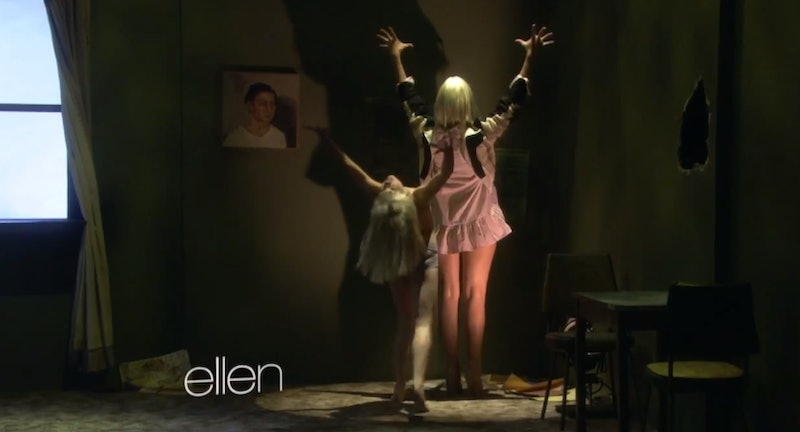 Ugh, I wish this magic happened during Sunday night's Billboard Music Awards: Sia and Maddie Ziegler recreated the “Chandelier” music video on Monday’s The Ellen DeGeneres Show. And boy howdy, do they DELIVER. It is very P!nk at the 2012 American Music Awards, which happens to be one of my favorite P!nk performances ever. After you watch the stunning performance from the 11-year-old Dance Moms star and the pop goddess, you'll think, What hologram?

"I've already seen the music video," you may say. "Why should I feel compelled to watch the live version?" Well, as you may recall, Sia is not in the music video. But! Sia is onstage for the live version. We never see her face, but she's there. And her physical presence adds an interesting element to the overall performance: If the video depicts the struggles of addiction—quite possibly Sia's own past struggles—that makes Ziegler and Sia's interactions peppered throughout the Ellen performance all the more haunting. Is Sia "battling" Ziegler? That's how I interpreted it, but I could be wrong. What I do know for sure: the performance will punch ya in the gut.

That choreo. EVERY TIME.

One of the less frenetic moments, it's very "put a face on and act like you have it together."

Her voice soars. SOARS, I say!

7. When Ziegler mimes hitting Sia’s back and then steps back. Sia hugs herself. Ziegler gracefully falls to the ground and rolls away. (3:24)

It's as if Sia giving herself a hug thwarts whatever it is Ziegler represents.

The intermittent, albeit calculated synchronization throughout the song is incredibly effective.

4. The demented, crazy eye curtsey with Sia curtseying behind her (3:41)

BEAUTIFUL. Ugh, give me all of the raw emotion.

1. Sia standing in the corner

It's a little Blair Witch Project, yeah, but whenever the camera cut to Sia’s back, my face went numb.

Here's the video. Prepare for chills, goosebumps, and tears. You've been warned: