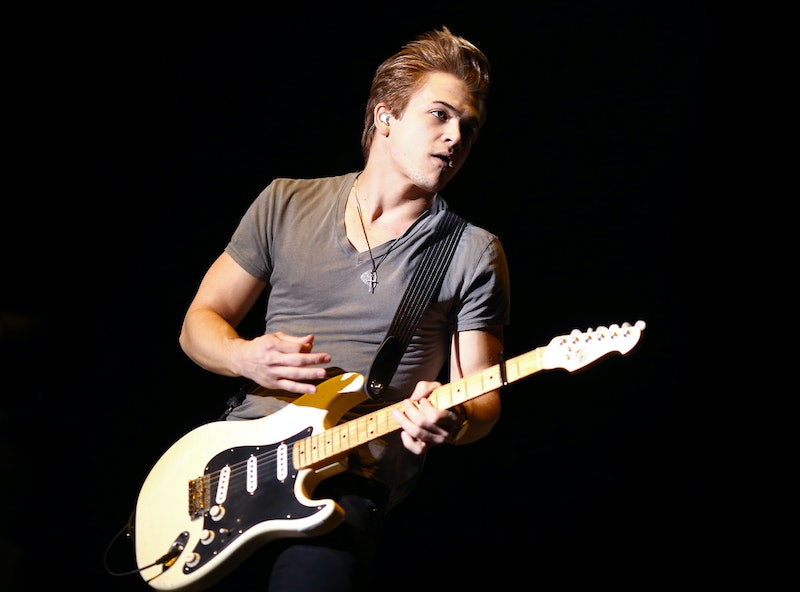 Best news ever, ladies: Country cutie Hunter Hayes has heart of gold, and that heart is, as of yet, unclaimed. Despite the fact that he's been tied to everyone from Selena Gomez to Taylor Swift — two gorgeous gals he'd be lucky to date — Hunter insists that he's single. I have no idea how nobody has snatched him up yet (because seriously, have you seen how adorable he is?) but Hunter doesn't mind. He's the kind of guy who can write chart-topping love songs while he waits for the right one to come along. And he's a three-time Grammy nominee? Sigh.

First, let's tackle those pesky Selena Gomez dating rumors. They're flattering, Hunter says, but he swears there's no truth to them. In fact, they barely even know each other. "I kinda felt bad for Selena 'cause we did meet and she was awesome, but we literally just shook hands and said hello," Hayes explained to CMT Radio Live. Can I just say how much I'd rather see Selena Gomez with Hunter Hayes — or anyone, for that matter — other than Justin Bieber? Hell, even Juan Pablo from The Bachelor looks like a catch next to Justin Bieber. That tree over there? Better boyfriend than Justin Bieber.

But even though Hayes hasn't exactly swept Selena Gomez off her feet, he's open to love with anyone else, should it happen to him — and the girl in question doesn't even need to live nearby. The "Invisible" singer says he's more well-versed in long-distance relationships than he'd like to be, since he's spent the greater part of the last few years out on the road, touring and promoting his music. "But when it's right, you find the time; you make it work," Hayes told Parade.

And Hayes definition of love? It's pretty on-target for a guy who's only 22 and has been thrust into the country music spotlight. According to Hayes, love is "When somebody makes you truly happy, magnifies the good in you, and makes you feel like you're everything you always wanted to be." You're right, Hunter. That's what true love should be like.

If I wasn't already in a relationship, I'd be all over Hayes like white on rice. That means it's up to you guys to do me proud. Go get 'em, Tiger! I'll be over here, seething with jealousy.

More like this
Love Of Huns' Definitive Guide To A Seminal BRIT Awards Moment
By El Hunt
Joe Alwyn Reacts To Taylor Swift Earning An NYU Doctorate In A Rare Interview
By Jake Viswanath and Nicole Pomarico
Harry Styles Addresses The Theory That His New Song "Daylight" Is About Taylor Swift
By Jake Viswanath
Is Megan Fox Pregnant? MGK Gave A Shout-Out To Their “Unborn Child” Onstage
By Hugh McIntyre
Get Even More From Bustle — Sign Up For The Newsletter