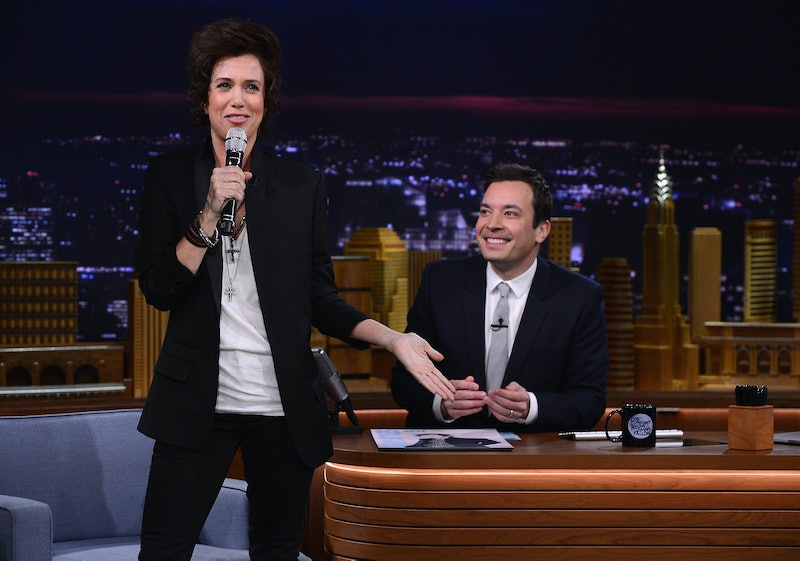 Jimmy Fallon was the perfect person to bring The Tonight Show into the digital age. Whether you love Jimmy Fallon or hate him (does anyone hate Jimmy Fallon?), you have to admit: The man knows how to make a viral video. Since taking over as the host of The Tonight Show in February, Fallon has churned out a string of viral hits and become a star of your Facebook newsfeed, like today's hit: the Nip Sync Duet of "Ebony and Ivory" with Terry Crews that you have definitely seen if you have access to a decent wifi connection.

But funny as it is, the "Ebony and Ivory" video isn't even Fallon's most memorable viral attempt since he took over the reins at The Tonight Show. It feels like at least once a week, he's pumping out a must-see video. Remember when Kirsten Wiig sacrificed her interview slot to be interviewed in costume as One Direction hunk Harry Styles? Or when the cast of Full House reunited to sing "Teddy Bear" to Jimmy and welcome him to his new time slot? Or what about every lip sync battle ever? No need to start Googling, we've got you covered.

Since Tuesdays suck almost as much as Mondays, here's a greatest hits collection of Fallon's most lawl-worthy viral videos to brighten up your day.

Quotable line: "You're going to be the host of The Tonight Show on NBC! Honey, no one can ever take that away from you." "Well...maybe Jay Leno."

"Box of Lies" with Jennifer Lawrence

Quotable line: "Inside my box...is a very curious thing – and that's not the first time I've said that."

"Gin and Juice" as rapped by Brian Williams

Quotable line: "Your band, One Direction, how did you guys form?" "We were at school...and it was one of those like hey...I sing? And then everyone kind of was like let's go to Harry's house and just start rehearsing and then we sent a tape to...RCA."

And, of course the Lip Sync Battles: