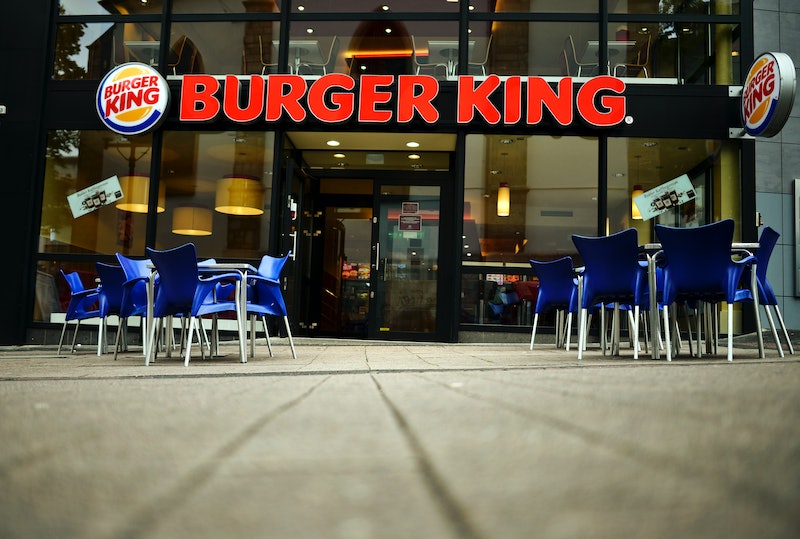 This really is the week of questionable branding decisions, isn't it? Lemonhead replaced its cute little mascot with an actual dude with a lemon for a head, McDonald's is preparing to frighten small children with its creepy new McDonald's Happy Meal Ambassador, and now Burger King has decided to change its "Have it your way" slogan. And the new one doesn't even make any sense.

After a four-decade run, "Have it your way" is being tossed aside for "Be your way," which debuted in an advertisement on Monday night. According to a statement from Burger King, the new slogan is meant to remind customers that “they can and should live how they want anytime. It’s OK to not be perfect … Self-expression is most important and it’s our differences that make us individuals instead of robots.”

Right. Burger King's senior vice president of global brand management, Fernando Machado, said that the brand was trying to connect more with the individual. The old "Have it your way" slogan referred only to the act of purchasing a burger, whereas "Be your way" relates to a person's lifestyle as a whole.

"We want to evolve from just being the functional side of things to having a much stronger emotional appeal," Machado said in an interview with NBC.

Unfortunately for Burger King, so far the new slogan has gone down like a lead balloon. As Laura Ries, president of brand consulting firm Ries & Ries, told the Associated Press, one issue with the new tagline is that "people don’t see themselves as living the Burger King lifestyle." There's also the issue that it doesn't really make sense and needs some extra explaining, which is never ideal for a brand slogan.

It's also ironic, as CBS points out, that a gigantic, homogeneous, global fast-food chain is trying to encourage its customers to be original.

Our verdict? If it ain't broke, don't fix it.

More like this
Why TikTok Is Obsessed With Caesar Salads Right Now
By Alexis Morillo
Twitter Is Still Reeling Over 'Bake Off's Surprise Competition Twist
By Bustle UK
Amazon Is Selling A Ton Of These 50 Things That Seem Expensive But Are Cheap AF
By Julie Peck
The 5 Best SLS-Free Toothpastes, According To Dentists
By Amy Biggart and Danielle Calma
Get Even More From Bustle — Sign Up For The Newsletter