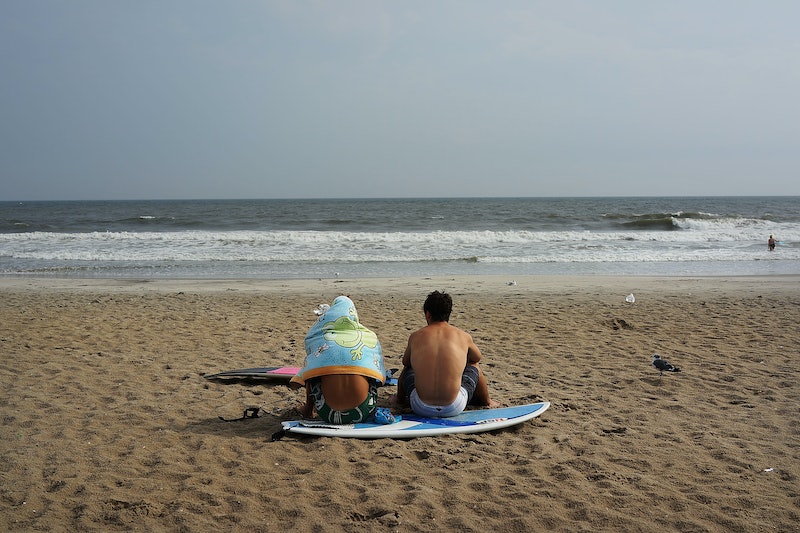 Slowly, surely, you're starting to hear the sounds. Crickets chirping at night. Water lapping in a newly open pool. A welcome breeze rustling through the trees. The radiating head of the pavement. The sizzle of an outdoor grill. The swimsuit that you have tucked away in a corner of your closet, you hear it calling you at night (okay, maybe that's just in your mind). But it's all a part of that new, summer music. It's intoxicating, it's hypnotizing. And come Memorial Day weekend, that music becomes almost impossible to ignore.

And you're stuck in the office, longing for a day at the beach. Never fear, we're here to bring you your own sounds of summer. Some of them may be songs you've heard before, some may be completely new to you. But they all have one thing in common: they radiate the warm, laid-back, breezy attitude of summer. So whether you're at the beach on a fantastic getaway, or just in the office longing for a cold beer when you get home, you can have your own summer music. Hey, either way, you'll have a "song of summer" to listen to that isn't "Get Lucky" or "Blurred Lines."

Listen to this song, and you become Miami Vice. You are wearing pastels driving to a beach in Miami in a convertible. You are both incredibly cheesy and effortlessly cool. Whoever said disco is dead never listened to this.

What better way to celebrate summer than with some classic Brazilian tropicália? The carefree attitude of the '60s, the sub-equatorial rhythms, and of course, lots of guitar. Just try not to imagine yourself lying on a beach in Brazil.

No one understands summer better than one of California's busiest musicians, Ty Segall. Listen to this on one of those days where the heat seems too oppressive and the humidity seems too sticky to do anything and know that you, girl, are fine.

This song is like taking a boat out into the ocean and diving deep into the cool water. It's laid back, it's hanging with friends, it's a love that's complicated and may not last.

Todd Terje is often described as a sort of master of electronic lounge music — just the sort of thing that's perfect for summer. Play this song by the pool as you do some lounging of your own with some ridiculously-colored frozen beverage.

On his first album, Christopher Owens perfectly encapsulated many of the feelings of summer. But he did it best on "Lust for Life," a simple guitar ode that echoes the aspirations of the start of the summer; the feeling that this will be it, this will be the summer full of found love and long nights and sandy beaches and warm bonfires.

Brazilian band Bonde do Role have perfectly capture the intersection of the surf party and the club. A reinterpretation of Wanda Jackson's "Funnel of Love," Bonde do Role's version has a bit more heat, and just enough of a winking attitude for a summer fling.

Say what you will about rapper Azealia Banks, but she really took the seapunk aesthetic to heart. Case in point, "Aquababe," and undersea banger that will allow you to embrace your inner mermaid.

Electronic musician Fatima al Qadiri's affinity for the occasional steel drum-like sound would hypothetically make for the perfect summer sound. But she works the sonic landscape into something deeper, making songs like "Hip Hop Spa" sound like the soundtrack to a horror movie being filmed at a Sandals resort.

I never know where Best Coast is on the "cool" scale. But regardless of the degrading quality of some of her recent work, Bethany Cosentino's first album remains a girl-group, surf rock time capsule of the lazy days of summer. Case in point, "Our Deal," a hazy ode to a hazy relationship.

Steve Gunn's music lands somewhere in between country and '70s rock, making most of his songs sound like a Texas street on a hot summer day. Put your sunglasses on and get lost in the sunset haze of "New Decline."

Don't be fooled by the name, Sun City Girls are not all sun and surf (or girls, for that matter). But somehow, the legendary rock weirdos managed to record a song that's perfect for cruising around in the summer heat.

Confession: I have an addiction to retro Bollywood songs. And songs like these are perfect for summer, combining the surf rock feel of the electric guitars of the era with intoxicating rhythms. Sure, you've heard the Heineken commercial with "Jaan Pehechaan Ho," but give this song a little love instead. It's incredible.