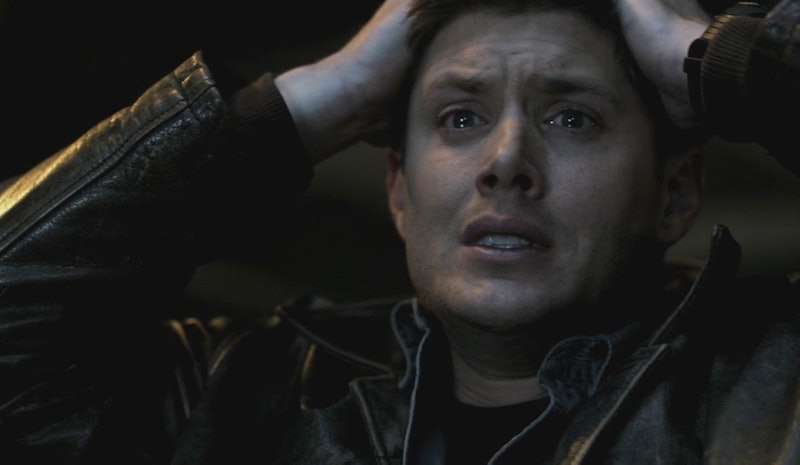 Supernatural is for masochists. I know this because I've watched a lot of Supernatural, and I derive pleasure when Jensen Ackles single tear rolls down his face whenever Dean Winchester is having a rough go of it. Which, let's face it, is most of the time. This was especially true in Tuesday's Season 9 finale for Supernatural , in which (spoiler alert) Dean dies in his brother's arms, only to open his eyes at the end of the hour as a demon.

Big parts of what went down Tuesday night are not new: Dean Winchester has actually died a truly astounding number of times, and his brother Sam (who's also died way more than his fair share) went down a pretty demonic path for a bit. So this ain't new — but if the pain being spewed all over my Tumblr dashboard's any indication, it still hurt like a mother. Because that's the Supernatural way: If you didn't think it was gonna rip your heart out, you obviously haven't been watching the same show.

Masochists that we are, there's really no more fitting way to commemorate nine seasons and another gut-punching character death than by traveling back through the show's past and reliving those moments that taught us new things about what pain feels like.

Dean Beats Up His Car After John Dies

This show's about nothing if it's not about daddy issues, so it makes sense Dean would have trouble dealing with his father's death. But it was still pretty heartbreaking to watch him try to deal.

Ah, the Season 2 finale. How young we were! We didn't yet understand this was a show determined to break records of how many times writers could slaughter their main characters. Joss Whedon eat your heart out.

Oh, younger self, you thought that was bad! HAHAHAHA. Oh, no. You sweet summer child. Let me introduce you to Dean Winchester, who responds to his brother's death by refusing to bury him and instead talking to his corpse for a week about all his life's failings. The self-hatred! The daddy issues! The man-tears! This cemented Jensen Ackles as a severely underrated actor — and it also cemented Supernatural as a show only suffered by emotional warriors.

Dean Goes To Hell, Sam Has To Watch It Happen

Of course, Dean leaves his weird talk with his dead brother to go sell his soul to a demon to bring said brother back. This results in the Season 3 finale, in which Dean goes to hell and gets there via being ripped apart by hell hounds while the baby brother he saved watches him die. Everything is terrible and we've only just begun!

Dean Confesses To What He Did In Hell

Surprise!: Dean didn't have a real great time in hell. He was there for 40 years hell-time and it kind of effed him up. He was being tortured for most of that time — until he took his torturer up on his offer to stop torturing Dean as long as Dean started torturing others. He confesses this tearfully to his brother ("How I feel, inside me? I wish I couldn't feel anything Sammy. I wish I couldn't feel a damn thing"). I'm not crying I'm just being emotionally assaulted by Dean Winchester.

Dean asks his dead father why he can never be happy

This is messing with the chronological order of this list, but it seems important to put this after all the death and literal torture, because it's even more effed up in retrospect. For one episode Dean gets sent to an alternate universe in which his mother's still alive and he and his brother are living (relatively) happy lives — except in this A.U. all of the people they've saved in their demon-hunting real lives are dead. It leads Dean to tearfully stand over his father's grave and deliver a monologue begging to know why their lives have to suck so much. "Your happiness for all those people's lives? It's not contest, right?" he says, imagining what his father would say. "Why do we have to sacrifice everything?" GOOD QUESTION, DEAN.

The devil takes over Sam's body, it's very stressful, yada yada yada. What's brutal about this scene is that it's actually one of the most uplifting moments of the entire series but we still have to watch Sam Winchester beat his beloved brother to a bloody pulp. But then their love saves the day! So that they may live on (kind of) to make us cry another day.

Cas beats Dean to a Bloody Pulp, Dean's Saved By Their Love

One of the most central relationships on the show other than the dynamic between the brothers is that between Dean and the angel Castiel. Of course Dean can't love anyone without them at some point or another beating him past recognition, so some dicks up in heaven brainwash Castiel into attacking Dean. But love saves the day again, and Castiel overcomes the brainwashing in time to not murder his best friend! Hooray!

These are the kinds of moments of joy we get on Supernatural.

Congrats on making it through all these years, fellow Supernatural fans.

More like this
The 'This Is Us' Finale Featured An Adorable Season 1 Jack & Rebecca Easter Egg
By Grace Wehniainen
'Gentleman Jack’s Cast & Crew Are Keen On Season 3, Too
By Frances Stewart
The 'It's A Sin' Creator Revealed A Massive Detail That Didn't Make The Final Cut
By El Hunt
Grey's Anatomy Fans Refuse To Accept Kaimelia's Shocking Relationship Update
By Brad Witter
Get Even More From Bustle — Sign Up For The Newsletter