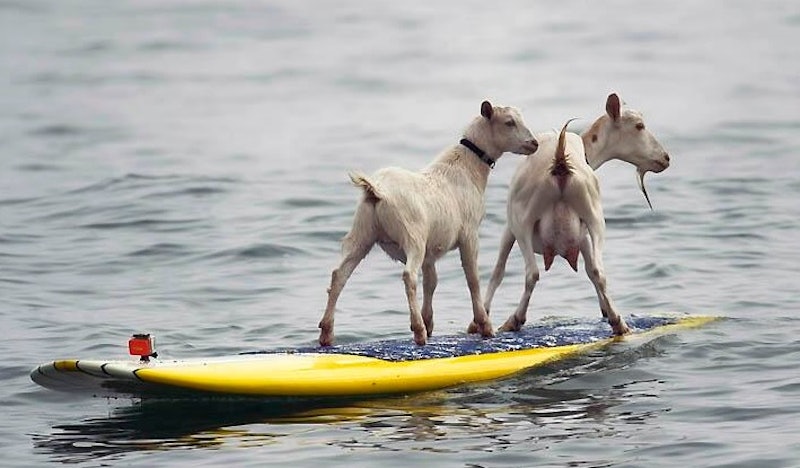 There should be some kind of rule against authorities discriminating against things that bring such immense joy to others. Because, let's face it, who could fail to feel joyful after an encounter with the famous surfing goats of Pismo Beach, California? Unfortunately, Pismo Beach City Council isn't such a big fan, and now the goats might have to go. The goats taking to the waves on a surfboard is not actually the issue — the problem is that their owner, Dana McGregor, is not technically allowed to keep them within the city limits. He's already been hit with four $400 tickets.

"I do have them registered as service animals, and they're actually emotional support animals, so they emotionally support me," McGregor told KSBY News .

Goats are allowed to live in the city — but only if they're housed on much bigger lots than where McGregor lives or if they're being employed temporarily on smaller lots to clean out weeds and brush. That was the reason McGregor bought nanny goat Goatee, his first goat, three years ago. His other two goats, Pismo and Grover, are her offspring.

McGregor then taught his cloven friends to surf. As in, actually surf in the ocean on a surfboard. They even have their own website. McGregor also uses the goats as mascots for some of his other endeavors, which include youth soccer camps and surf camps. He also takes them to visit retirement homes, which is awesome. They'd definitely cheer us up for sure.

McGregor has also joined up with a couple of organizations to raise money to "give a kid a kid" — a project that works to provide Haitian children with young goats.

As it stands, Goatee, Pismo and Grover are on the brink of eviction. But there's a chance the city might revise their rules — and it sure doesn't hurt that the goats in question are celebrities. The city is considering coming up with a new section to add to the law that would allow residents to get a permit to keep four goats or fewer on private property, which would then be reviewed at the end of the year to see if it's working out.

Sounds perfect, and pretty much tailor-made for McGregor and his surfing superstars. We really hope it works out.