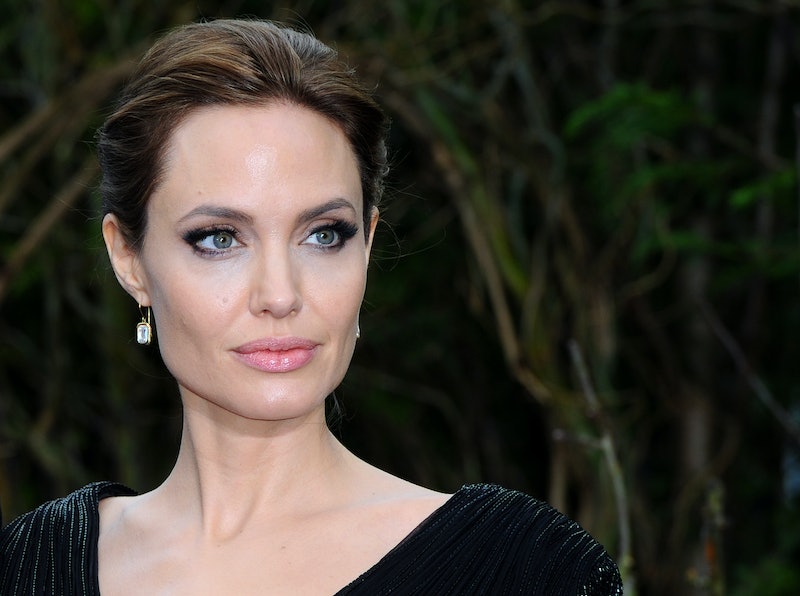 It is incredibly ease for people to find bones to pick with celebrities to the point that it really isn't fair much of the time. But one celeb has just made a statement that is exactly what the public wants to hear and that no one should take issue with. In a new interview, Angelina Jolie said that women in her position shouldn't complain. What are you gonna do with that one, public? Say, "Oh yeah! You go girl! Thanks for having an understanding the differences between your position and those of other, less fortunate people." That's what I thought.

In the interview with New York Daily News, Jolie explained, "I’m not a single mom with two jobs trying to get by every day. I have much more support than most people, most women in this world. And I have the financial means to have a home and health care and food." Jolie's interview was part of a press conference held at a hotel and she mentioned that her kids came with her and were hanging out upstairs.

Jolie went on to say that she's thankful for the amount of flexibility her jobs provides because she doesn't have to take job after job if it doesn't fit into her life at the moment. She said,

I actually feel that women in my position, when we have all at our disposal to help us, shouldn’t complain. Consider all the people who really struggle and don’t have the financial means, don’t have the support, and many people are single raising children. That’s hard.

These statements immediately bring to mind another actress who spoke about her career and motherhood but, seemingly, took the opposite stance. Gwyneth Paltrow was put through the wringer when she insinuated that it was easier to raise children as a mother working a nine-to-five job than as a actress. She said,

I think it's different when you have an office job, because it's routine. You can do all the stuff in the morning and then you come home in the evening. When you're shooting a movie, they're like, 'We need you to go to Wisconsin for two weeks,' and then you work 14 hours a day and that part of it is very difficult. I think to have a regular job and be a mom is not as, of course there are challenges, but it's not like being on set.

Clearly, Paltrow has a different set of problems that many of us can't relate to, but does that mean she shouldn't talk about them? Maybe not publicly if she doesn't want to come off completely self-important, but just because other people are worse off by comparison, doesn't make her feelings invalid. I would say the problem isn't Paltrow's thoughts, so much as the fact that she was looking at things on such a small scale. Paltrow can have the feelings she does of her situation — It seems they have to do more with her own ability to juggle a demanding job and raising a family than anything else. Especially in comparison to actress/director/mother-of-six/humanitarian/general over-achiever Jolie — but what Jolie does is zoom out and look at the bigger picture and is grounded enough to see that complaining about what she has going on doesn't make sense because of all of the things she has to be thankful for in her life. And that's something that people can relate to.