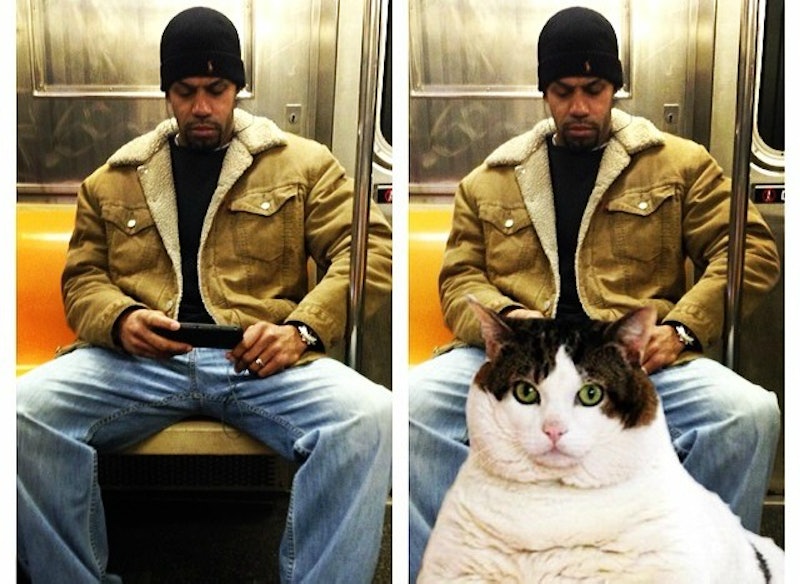 The New York City subway (and, really, any subway in the world) can be a cramped and uncomfortable place. Sure, it gets you where you’re going, and it’s a lot more affordable than taking cabs everywhere — but having your face shoved up against someone’s sweaty back during your evening commute on a hot summer day is probably most New Yorkers’ idea of hell. But you know what’s even worse than a cramped subway? A cramped subway that is so gosh darn cramped because someone has decided that they need all the space, and that it's reasonable for them to force anyone else who might need a spot to stand. Why do some folks feel the need to spread themselves out over three seats, anyway? Thanks to a glorious new Tumblr, we now have the definitive answer to that very question: They’re Saving Room for Cats, of course.

Some genius has taken to filling in the giant gap between some dudes’ legs as they sprawl across the subway with gigantic images of cats, and the results are magnificent. I will never need another Tumblr in my life as long as whoever is behind Saving Room for Cats keeps updating. As BuzzFeed puts it, cats need subway seats, too, right? Especially if they’re as enormous as some of these felines — seriously, we’re talking cats the size of small tigers. This one’s bulk is probably made up mostly of fur:

While this one looks like it might challenge Jabba the Hutt for the right to his questionable crime lord throne:

I kind of want to take this one home with me:

But woe betide the foolish human who decides to mess with this one:

I believe Jezebel Groupthink user LuckyMc44 put it best when s/he wrote, “I love you, Internet.” If Saving Room for Cats is anything to go by, sometimes — just sometimes — the Internet loves us, too.