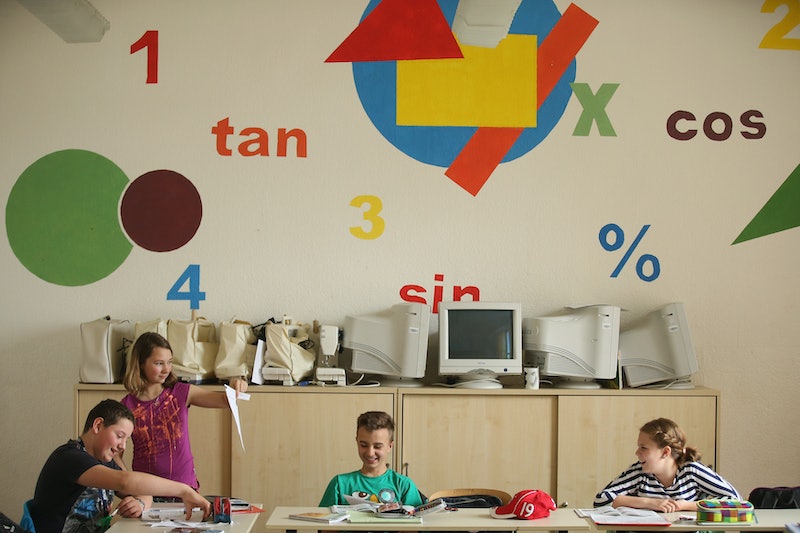 If you happened to be one of those girls who got perfect grades in high school, congratulations; you earn as much as a man who got a C average. But, yeah, sure, the wage gap totally doesn't exist guys! Eye roll.

According to a study from University of Miami, even if you went to college and your potential employers don't care about your high school grades, those grades are still good indicators of what your future pay might be. And for women, the news is not good. It seems that as bad as the gender pay gap is in general, looking at it in the context of high school grades makes it even worse. Apparently women with a perfect 4.0 GPA in high school still make barely more, on average, than men who earned a 2.0. What? What?

And the trend only continues. High school girls who themselves have a 2.0 GPA can expect to earn about as much as their male classmates with a 0.5 GPA. That is below a D average, but apparently being a man still makes you just as valuable as a girl who got C's.

Excuse me while I reminisce about my high school classmates and think about what this means.

Once you get past the basic cosmic injustice of it all, there are a lot of possible ways to interpret these findings. Overall, though, this says to me that the gender wage gap isn't something that magically appears when students start looking for post-college jobs. It's more like a continuation of a system in which women are consistently undervalued in ways that only compound over time.

After all, based on this study, women aren't even making the famous 77 cents on a man's dollar of the men in their same GPA bracket. And in the lowest bracket they're only averaging about a third of the income their male counterparts receive. Why?

The study offers no insights into the phenomenon, but it seems logical to conclude that women's achievement is already undervalued in high school, if not earlier, and that this in turn leads to women receiving fewer opportunities later on. This whole thing is compounded throughout a woman's life as women with fewer opportunities continue to seem more and more unimpressive compared to their male counterparts. And finally the day comes when a woman finds herself earning as much as someone who had half her GPA in high school, simply because he was given plenty of opportunity anyway.

Or I guess we could blame the "mommy track." Because everything, apparently, can be explained by the mommy track.

Meanwhile, I definitely don't suggest pulling out your high school year book and trying to determine who's out-earning you, no matter how tempting it might be. That way leads unto madness.