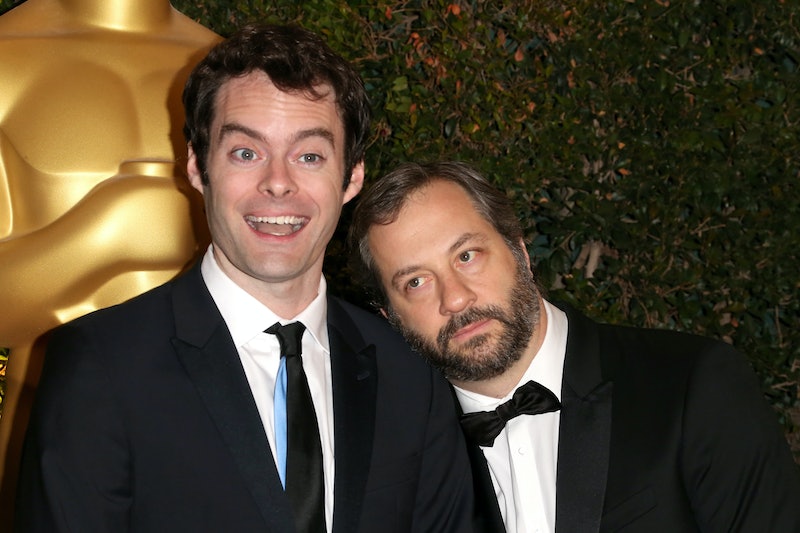 Where has Bill Hader been, besides slamming Andy Samberg in an impressions-off on the season finale of SNL? Wonder no longer: Hader has been developing a new show for HBO! Very few details about the project are available, besides the fact that it definitely exists, but we all know what a show on HBO means: crudeness and lots of cursing, a la Jon Oliver's new Last Week Tonight, so even without a clue whether the show will be 30 minutes or an hour, I'm excited. But! A little dubious.

What's Hader's show going to be about? Since he tragically departed from SNL (but not before he wed Seth Meyers as Stefon on Weekend Update, which made the sorrow of his parting a little sweeter), Hader hasn't really been in the spotlight. He plays Mindy Kaling's very funny, very douchey dentist ex-boyfriend on The Mindy Project, and of course our favorite good-at-heart criminal idiot on Bob's Burgers, Mickey. And he has a bunch of projects in post-production that he's bound to shine in, just like he did in Forgetting Sarah Marshall. Also, I'm particularly thrilled that he'll be starring alongside Paul Rudd and Amy Poehler in the upcoming We Came Together from Wet Hot American Summer director and legend David Wain. That's going to be great.

But here's the thing: we've never seen Hader in the spotlight! And it's long overdue — he provided some of the best characters on SNL over his nine-year run. Apart from the inimitable Stefon, who got us through the years by touring all of New York's hottest clubs, he also gave us a hilarious James Carville and Italian talk show host, Vinny Vedecci, among others. In an ideal world, Hader's new HBO show would be a Stefon-a-rama, but we know that's just a pipe dream (and besides, they'd HAVE to pull Seth Meyers from Late Night to star with him).

Hader's also a talented writer; he provided his chops at SNL and at South Park, so we know that he has the potential for comedy gold with his new HBO deal. We just want more details! Regardless of what format the show will take (sitcom? mocumentary? musical hybrid like Flight of the Conchords?) we know Hader will probably follow his fellow SNL alum's footsteps and lean on them for endless cameos. And it really is our favorite thing to see SNL castmates chumming it up outside of the SNL stage.

For now, we're gonna hang on to meager thread of hope that it COULD just be a show about young Stefon making it in the big city, Mary Tyler Moore style. But with more acrobats and sex robots.