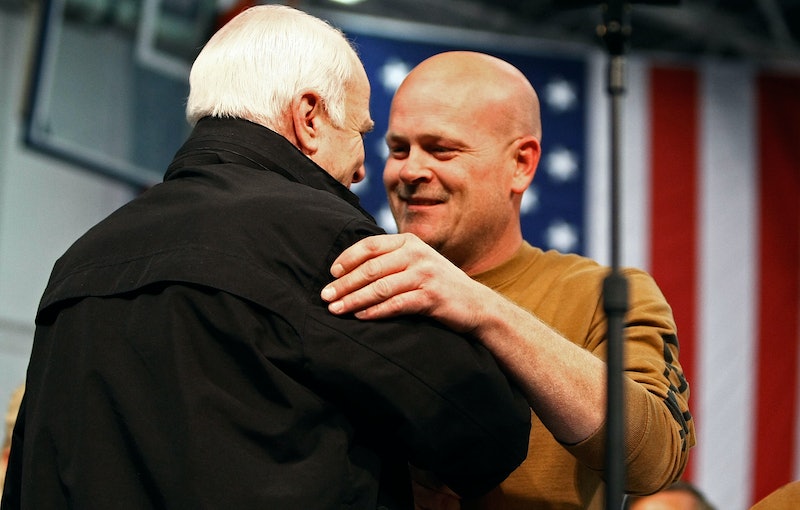 In 2008, Barack Obama ran against Sen. John McCain, Gov. Sarah Palin, and unlicensed plumber Joe Wurzelbacher, otherwise known as Joe The Plumber. Better known as "Joe the Plumber," Wurzelbacher catapulted into the national spotlight and became a Republican icon after a famous encounter with Barack Obama. But it's been six years since Joe the Plumber stopped Obama on the campaign trail to ask about his tax plan, and on this week's edition of #throwbackthursday, we'd like to take you on a trip down memory lane with Mr. Wurzelbacher.

Remind me again, who is Joe Wurzelbacher? Joe Wurzelbacher, or Joe the Plumber, was cast by Republicans as the everyman that the Democrats were destroying in their attempts to create a "socialist" nation where wealth redistribution ran supreme and universal healthcare destroyed lives. For the record, the Sadoff Investment Research firm of Wisconsin recently released a report that shows that the gap between the rich and poor in America is only widening, and Obamacare has not only granted healthcare to millions of previously uninsured Americans, but there is also evidence to suggest that it is saving lives.

But technicalities aside, Joe the Plumber is, or was, rather, a plumber with questionable certifications who stopped Obama on Shrewsbury Street in Ohio and said,

Obama, in typical politician fashion, gave a long response, but one part in particular was picked up by media outlets across the nation, giving conservatives fuel for their Obama-is-a-socialist fire. “I think that when you spread the wealth around, it’s good for everybody,” Obama said, and this fateful reply launched Joe the Plumber's fame.

But how did he get famous? OK, fair enough. Obama didn't make Joe famous by saying that spreading the wealth was a good thing. Rather, it was John McCain who really introduced Joe the Plumber to the spotlight. During the third presidential debate between Obama and McCain, McCain mentioned Joe's name more than two dozen times. The next day, McCain continued to name drop, saying,

Joe the Plumber spoke of his newfound fame to the Associated Press, saying, “I’m kind of like Britney Spears having a headache. Everybody wants to know about it.” A strange comparison, to be sure, considering most people probably wanted to know more about Britney Spears' custody battles with K Fed than her headaches in 2008. In fact, does anyone ever really want to know about other people's headaches?

So were plumbers in general anti-Obama? Well, Joe himself may not have been a big fan of Obama's tax plans, but unfortunately for John McCain, the plumbers' union endorsed Obama in the 2008 election, saying "he has always fought for working people throughout his career." Joe, it seems, was not exactly representative of his colleagues, perhaps because he wasn't exactly a plumber.

What do you mean, he wasn't a plumber? According to Thomas Joseph, the business manager of Local 50 of the United Association of Plumbers, Steamfitters and Service Mechanics, Joe never obtained the necessary licensing to work as a professional plumber. Said Joseph,

All contractors are licensed, and [Joe] does not have a license, either as a contractor or a plumber. I can’t find that he’s ever even applied for any kind of apprenticeship, and he has never belonged to local 189 in Columbus, which is what he claims on his Facebook page.

Joe the Plumber later admitted that he worked despite his lack of a license.

Now that the 2008 campaign is over, are Joe and McCain still friends? Absolutely not, according to Joe. In 2010, Joe made some pretty scathing remarks about the man who once touted him as the face of honest America. Said Joe, "McCain was trying to use me...It was a ploy." According to the plumber, John McCain "really screwed [his] life up."

As for Obama, it seemed that Joe had come to terms with his president, and at the very least, was slightly more complimentary of the commander-in-chief than his 2008 opponent. When asked about his feelings for Obama, Joe said, "I think his ideology is un-American, but he’s one of the more honest politicians. At least he told us what he wanted to do."

So what's Joe up to these days? Funny you should ask! Joe the Plumber recently made headlines again thanks to his new job. The man who once chastised Obama for his so-called redistribution policies has landed himself a union job with Chrysler Group LLC. That's right, Joe, who ABC News described as a "vocal opponent of public unions," is now a member of United Auto Workers Union. The irony of his situation has not been missed by his coworkers, some of whom have called him a hypocrite and a "teabagger." But regardless of what others have to say about him, Joe makes an excellent point when speaking of his new employment:

I’m a Republican who was cast into the limelight for having the temerity to confront Barack Obama on the question of redistributing wealth. But I’m a working man, and I’m working.

And we respect that, Joe.