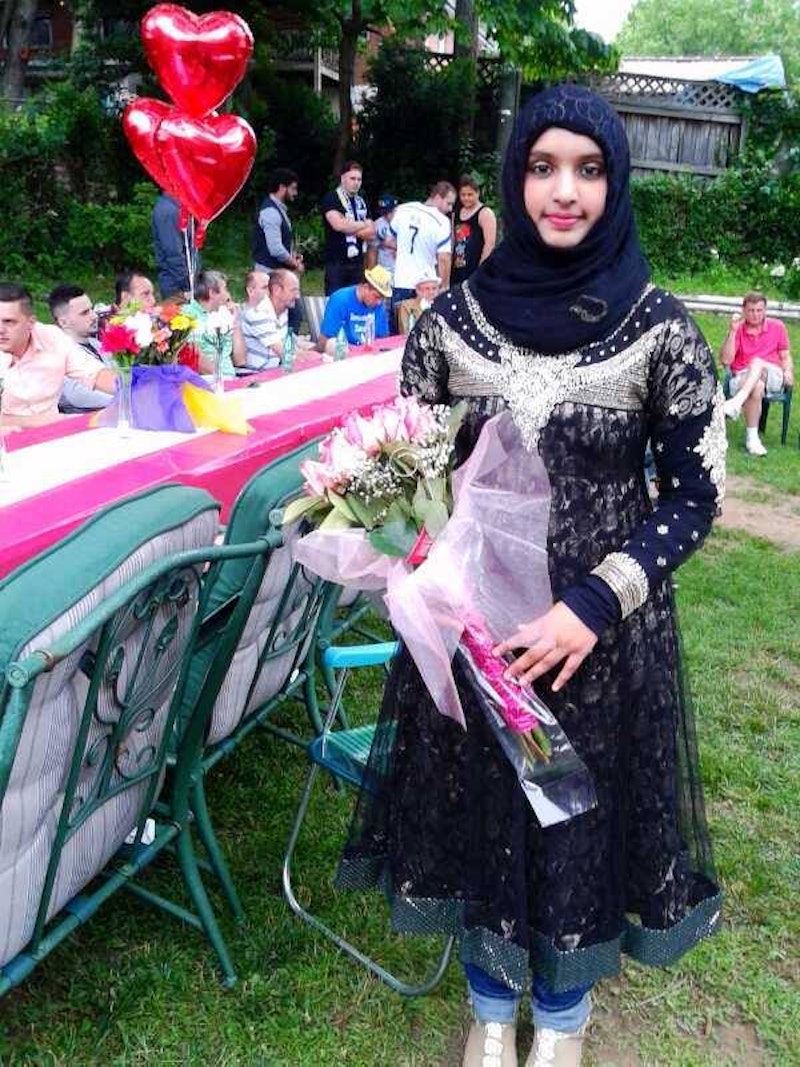 I am a 17-year-old Muslim-American living in the post-9/11 world — or as I like to call it, the era of Islamophobia.

Veiled women who submissively follow their husbands’ orders and are forbidden to drive; men with dark skin and a herd of wives around them; people who speak in a harsh Arabic tongue discussing Sharia law — these are the things that people sometimes associate with the followers of Islam. And there is another thing that some people associate with Muslims — it’s the thing that causes them to uneasily scrutinize the bearded man who walks through security at the airport, watching as he collects his hand luggage from the conveyor belt and scrambles to slip on his shoes. They eye his ticket, hoping he's not on their flight.

Following the attacks of September 11, 2001, Muslims have been associated with the corrupt leaders of organizations that steal, rape, and sell girls on the black market, or people who ruthlessly bomb innocent civilians while chanting “Allahu Akbar.” On American soil, people who believe that Muslims must be terrorists have firebombed mosques, killed a suspected Muslim man by pushing him in front of an incoming subway train, and stabbed a Muslim man outside of a mosque in the name of these beliefs. Last week, when 15-year-old Palestinian-American boy Tariq Abu Khdeir's brutal beating by Israeli police in Jerusalem garnered media attention, it started a conversation amongst other American Muslims on why it took this event to bring awareness to anti-Muslim violence in Israel and Palestine, when Israeli deaths are covered by our media and recognized by our president.

Growing up as a Muslim-American in a post-9/11 society, it became increasingly difficult for me to establish my identity. Following seemingly any attack on the United States, the attackers were revealed to possess names like Abdulmutallab, Taheri-azar, or Afzal Haq. It made me feel ashamed that these terrorists had Islamic identities, just as I did. I found myself feeling distanced from my Islamic identity, yet simultaneously feeling alienated from and foreign to my fellow Americans. The animosity that some people displayed toward not just terrorists but Muslims in general made me question who I was; I wondered if being a Muslim and an American were mutually exclusive.

"I pledge allegiance to the flag of the United States of America, and to the republic for which it stands, one nation under God, indivisible, with liberty and justice for all."

I repeated these words, words that were drilled into my head from the time I entered school — but what did they mean, and where did my loyalties lie? As I grew older and entered high school, I began wearing the Islamic headscarf known as the hijab, and I found that I felt further alienated from my American identity. I felt the need to prove to others that my English was perfect and that I hated terrorism as much as they did, that I was indeed a true and valid American, as millions of other Muslims are. When I took AP world history at my high school, we learned that Muslim women wore the hijab to mitigate their lust, to decrease their desire for sex. I remember a question on a quiz asking what the purpose of the hijab was, and I knew that this was the answer that the teacher was looking for — this was the correct answer...but it was horribly wrong, completely and utterly incorrect. The chasm between my Muslim identity and the way those around me perceived Muslims was disorienting.

Because of my hijab and my religion, people told me that I should “burn at the stake,” and go back to my hometown, even though I was born and raised in the United States. I began to wonder what the roots of this discrimination were. I think that a sense of unity and security results from collectively hating on a specific group of people — it unites the discriminators, while those discriminated against are cast as outsiders. This has happened in history: during World War II when Hitler scapegoated the Jews and when the Japanese were forced into internment camps; during the Red Scare, when the U.S. government cultivated anti-Communist fear and paranoia in order to take away Communists’ rights.

In exploring my identity as a Muslim-American, I have spoken to many women who report similar experiences. Mara Ahmad, 38, a college student in Wisconsin, expressed confusion at her friends' reactions after converting to Islam and wearing the hijab. “After I started wearing [the] hijab, a family friend asked me, ‘When did you stop being American?’" she said. It really astounded me that people saw the hijab as a loss of American identity. We're all Americans, so wrapping a piece of cloth over our heads shouldn't all of a sudden make us "foreign."

One woman, who wishes to remain anonymous, described to me a horrific experience of being discriminated against because of her Islamic faith.

"These two boys were making terrorist jokes about me. They said something like 'She might blow up on you, man.' Everyone heard. I was humiliated and wanted to stop wearing hijab. In gym class, a girl sexually harassed me. She would say explicit things, grab my face and ask me why I was Muslim. She told me I should get naked. I had to crawl under a stall away from the shower where she pushed me in. Nobody bothered to help."

I asked high school student Isabel Townsend-last, 17, what she thought was the cause of such discrimination.

"Well, the brain is a very complex computer, constantly making predictions based on all that it has seen. But the interesting thing about the brain is that, even when it has no input, it will make the necessary prediction off of what little it has seen. The same thing is happening with discrimination. The brain sees small snippets of reality and decides to put it all together on its own: to make one example apply to the masses. It’s natural, but discrimination is still very preventable. Preventable as in, we can’t stop the predictions but we can make it very clear that though your brain will do this, there is more to the story."

Another woman, who wishes to remain anonymous, recounted to me her experience while wearing the hijab on a flight.

"One time flying home from school, I decided, why not wear my hijab? As a white woman, I had flown many times before with no problems. However, I knew right away that they were treating me differently. TSA gave me a full body pat down and had to run tests on my laptop. On the plane, I usually chat with my seat mates, but the man next to me tried very hard not to make eye contact with me and was very short with me when I asked him in a friendly manner how he was doing and where he was going.

"A child sitting across the aisle from me even looked scared of me when I tried to smile at him. Children usually love me, and I tend to get along with them very well, so this was extremely unusual. I wanted to tell these people: I am an American, just like you! Just because I choose to wear a scarf on my head doesn’t make me a terrorist."

Based on these experiences and my own, I worry that people will fear me; that they’ll disregard my navy blue United States passport and my Western values and see me only for my skin color, hijab, and last name. I worry that they will unjustly equate me with the Muslim people who have taken innocent lives and have tarnished the reputations of millions of American Muslims.

American society must still learn to never associate the majority with the extremist minority. In the meantime, though, I think we Muslims need to be both patient and proactive. I could never apologize for events such as 9/11; I will refuse to bear the responsibility of the beautiful lives taken away by the people who claim to act in the name of Islam — but I can be an excellent representative of my religion in order to eliminate the ignorance that exists surrounding it. We are Americans, and our freedom of religion says that we have the right to be Muslims; nobody can take our Islamic identities away from us. I will never be ashamed of my Islamic identity; I will use it to redefine Americans' perceptions of Islam.

During the winter time, the sun sets sooner, and because the Islamic prayers are based on the patterns of the sun, it becomes increasingly difficult for me to offer my daily prayers when I get home from school. I don't have a choice but to pray on the bus ride home. Whenever I pray, a close, non-Muslim friend of mine protects me; she never asks questions, and I'm sure that she'd defend me if anyone tried to harm me or disrupt my salah (prayers). I've prayed at restaurants, concerts, in changing rooms, even in my school library. I remember my former teacher being so kind and understanding when I told him what I was doing.

When I pray in public — when I refuse to succumb to the part of me that is so preoccupied with what others will think of me, with the inevitable stares — I disregard all of the discrimination and come to a realization that, at this moment, nothing is more important than prostrating to my God. When I finally finish my salah and say "salam" to the right and then the left, I realize that nobody minds. Nobody asks questions, nobody treats me any differently — because through my actions, I believe I am slowly beginning to reshape my fellow Americans' perceptions of Muslims. I believe that the people I come in contact with and get to know see me as a positive member of society and a Muslim — not one or the other. I hope that all American Muslims can take pride in their religious freedom and in turn find acceptance within themselves and society.

It’s been 13 long years since 9/11, but America has come a long way, and society can be proud of that. My fear of not being accepted in American society has propelled me to take measures to eradicate stereotypes regarding Muslims, and it has made me the strong-minded and driven Muslim feminist I am today. Living in a society rife with Islamophobia has taught me to stand up for what I believe in and act as a representative of my religion for innocent Muslims across the globe. And in some moments, like when I pray to my God in public and without shame, I believe that we are truly making progress.