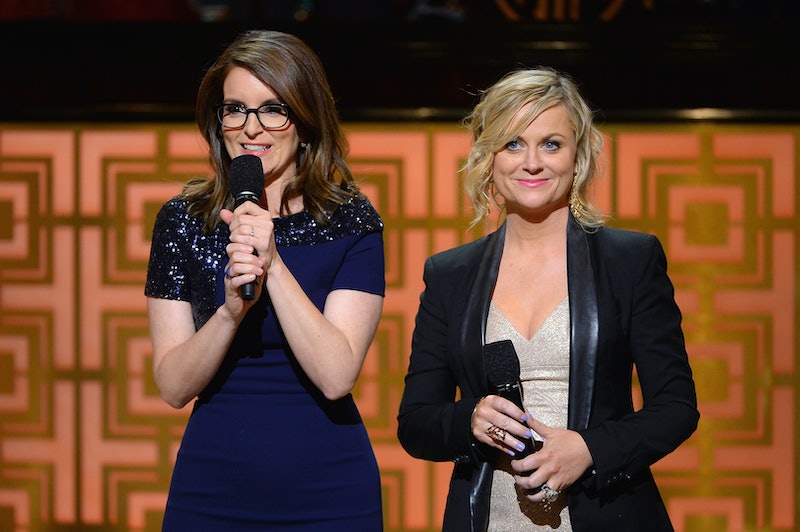 It's hard to imagine them ever being thought of as someone's second choice, but on Tuesday night, Tina Fey and Amy Poehler's appearance at Spike TV's All-Star Comedy Tribute to Don Rickles was only a result of Whoopi Goldberg backing out at the last minute. Despite the snub, however, the duo killed, bringing down the house in their brief, minute-long spot on stage — but, in true Fey and Poehler fashion, didn't balk at mentioning the fact that they weren't the first choice to help give the 88-year-old comedy legend a proper roasting.

"So here we are, because they thought it was important for Don to be honored by at least one woman, which apparently, is what we count as," said Poehler.

Added Fey: "Thanks for sending one car for the both of us. Do you send Seinfeld half a car?"

In their short time on stage, the comedians also made sure to poke fun at the man of the hour, with Fey beginning their bit by saying, "We’re here tonight to celebrate Don Rickles. And honestly, it’s almost like he’s here with us. You can feel his spirit in this room tonight."

Poehler quickly corrected her, gesturing at Rickles in the audience.

"Jesus!" said Fey. "I thought that was somebody’s purse."

Cue the audience's huge laughter (and, probably, the startling realization that TinaandAmy really are two separate people). In barely a minute's time, the duo absolutely killed it, despite the fact that they only learned they'd be appearing on-stage mere minutes before their time slot. Even Rickles seemed to love their jokes, telling The New York Daily News that “Tina and Amy were terrific." He also called them a "pair of swell broads," which, from a man nearing 90, is probably as good a compliment as it gets.

As for Fey and Poehler, they were just honored to be asked to perform.

"The great thing about Don is that his jokes appeal to everyone," Said Fey. "Polacks, Chinamen, coloreds, broads. What? I’m not allowed to say that anymore? Why is he saying that?”

Aaaand they're out. The entire tribute, also featuring roasts from David Letterman, Jerry Seinfeld, Robert De Niro and more, will air May 28 on Spike, but you can watch Fey and Poehler's portion below: