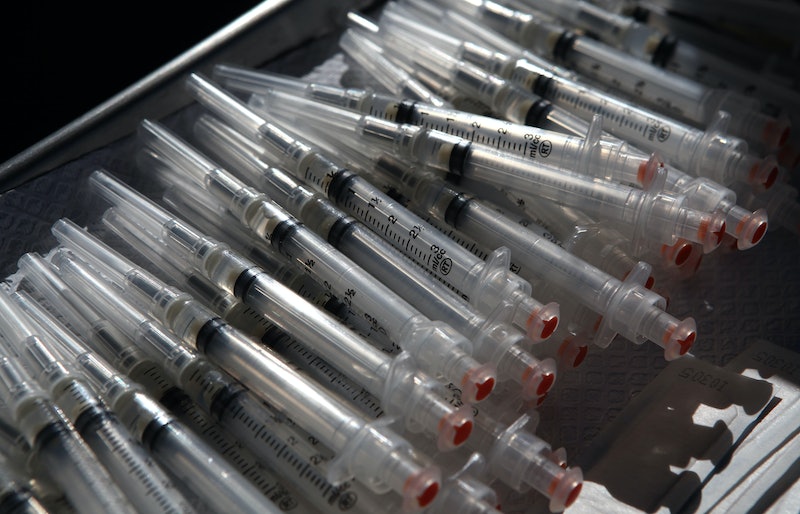 No matter your stance on the death penalty, knowing what goes into a lethal injection is important. To date, over 1,000 people in the U.S. have been executed by lethal drugs, and the last year alone has seen the botched executions of Clayton Lockett and Dennis McGuire, both highly publicized and apparently extremely agonizing. Although an actual lethal-injection machine does in fact exist, mechanical failure is too high a risk to take with executions, so normally the lethal injections are performed manually — ironic, really, because as it's done by prison guards with very little training, the chance of something going wrong is also pretty high.

"The drugs are supposed to be used by qualified anesthesiologists who have trained for five years (and signed the Hippocratic oath), not prison officials who have been on a two-day training course," Maya Foa, Strategic Director of the Death Penalty Team at Reprieve, told Bustle. The drugs are typically administered via IV tubes, with the team often hidden behind a curtain or in a different room, so that the audience can't identify them.

The first lethal injection was administered on December 7, 1982 in Texas and until four years ago, almost all U.S. states used a three-step protocol: an anesthetic, followed by a paralytic agent and finally a drug to stop the heart beating. Some prefer to use a single, intense dose of a drug, though — the first to do that was Ohio, back in 2009. Since then, eight more states have used a single-drug method of capital punishment: Arizona, Georgia, Idaho, Missouri, Ohio, South Dakota, Texas, and Washington.

In the past, five grams of sodium thiopental, also commonly known as "truth serum," was step one in a lethal three-drug cocktail. It's part of a type of drug known as barbiturates, which basically induce anesthesia, making the prisoner lose consciousness. In high enough doses, barbiturates can also be be lethal on their own (though they can take anywhere from 30 to 60 minutes to actually cause death); Ohio was the first state to use sodium thiopental for a single-drug method of execution.

“All barbiturates put the brain to sleep by slowing down brain function,” Dr. Mark A. Warner, president of the American Society of Anesthesiologists, told The New York Times. “The brain cells that drive the desire to breathe are also suppressed. So any barbiturate, if you give enough of it, somebody quits breathing. Also, if you give enough of it the heart quits pumping as hard and that can cause decreased blood pressure.”

However, because back in 2011 the American manufacturer of the drug stopped making it, and European manufacturers refused to supply the U.S. with a drug they would use for capital punishment, states in the U.S. have to turn to other options for the first drug in the cocktail.

Like sodium thiopental, pentobarbital is an anaesthetic, used often to treat animals and occasionally used to control convulsions in humans. Suppliers of pentobarbital have recently also recently dried up, though, making states with capital punishment turn to the third option for step one: a non-barbiturate.

Midazolam is a controversial drug because it actually doesn't have any painkilling power by itself — it has to be combined with another two chemicals in order to induce a kind of semi-sedation, which might cause the prisoner to relax and suffer memory loss, but not necessarily pass out. It was midazolam that was used in Oklahoma's botched execution of Clayton Lockett earlier this year; Ohio has used it in a two-drug protocol.

Step two of the common three-drug cocktail, pancuronium bromide is a neuromuscular blocker that works to paralyze the prisoner. The amount injected varies, but normally it's 40 to 100 micrograms per kilogram of body weight, This is administered in executions for two reasons: the first is so as to stop the lungs from contracting, hence stopping the prisoner from breathing; the second — and more gruesome reason — is so that the prisoner doesn't move in front of the audience. Writes David Kroll in Forbes:

If given without the other drugs, it would be like having the worst night terror imaginable. You would experience oxygen hunger from being unable to breathe but be unable to move, all while being fully conscious.

This last one literally stops the heart. While potassium is a necessary component of the body's nervous system, a high dosage just short-circuits the heart's electrical signalling, inducing a heart attack. It's also agonizing.

As Knoll explains, "If given alone without the other drugs, the high concentration of potassium chloride would be terribly painful, akin to fire or electricity coursing through the veins." If all goes as it's supposed to, within a minute or two of the potassium chloride being injected, the prisoner should be pronounced dead. Of course, though, that sometimes isn't the case.

So, are any of these protocols better than any others? Is one of the chemicals more dangerous than another? In short, no. "The point about the lethal injection is that it’s all risky. The drugs they use are medicines which were designed and manufactured to improve the lives of patients, not end the lives of prisoners," Foa told Bustle.

More like this
How 5 People Upended Their Lives To Fight For Abortion Rights
By Hannah Smothers
The Families Of Grenfell Tower Are Still Waiting For Justice, Five Years On
By Bustle UK
The Best Summer Workout Gear Of 2022
By Carolyn Steber
The Best Underwear For Sensitive Skin, According To A Dermatologist
By Alexa Vazquez
Get Even More From Bustle — Sign Up For The Newsletter