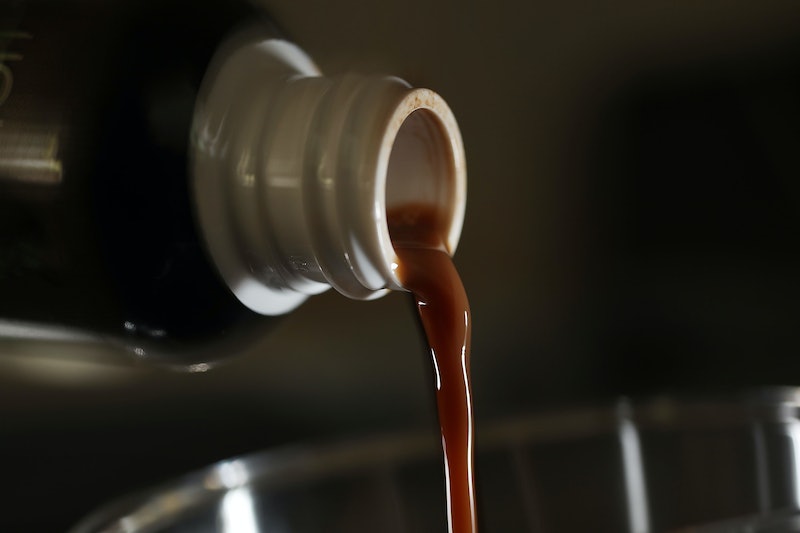 Sizzurp, the drink/recreational drug/Justin Bieber vice that notoriously contains codeine, has evolved. A Southern California company called Actabliss has created a spin-off of the infamous drink with a new signature ingredient: cannabis. In other words: sizzurp marijuana. Rather than use the original's active ingredient, codeine, this brand-new sizzurp is infused with THC and cannabinoids and can be added to soda to create an, um, questionable beverage.

In order to fully appreciate this new and improved sizzurp, one must familiarize themselves with the original. Too complicated for just one name, sizzurp has a wide array of monikers, like lean, purple drank, and Texas tea. The traditional formula consists of prescription-strength cough syrup (which contains codeine and promethazine, a sedative antihistamine), sugary soda (fruit-flavored and clear sodas like Sprite are preferred), and Jolly Ranchers for extra flavor.

Lastly, make sure you enjoy from a Styrofoam cup. Glassware is for punks. Are you a punk?

Sizzurp can't be held back by rules, so drinkers often get creative with it. Anything from vodka to crushed painkillers are added to the concoction for added effect. And if you're low on dollar, you can substitute that fancy cough syrup for some good old Robitussin. Hey, haven't we all been there?

Unfortunately, Actavis, the pharmaceutical company who made the codeine- and promethazine-containing cough syrup, pulled its product off shelves in April, cutting short the promising life of the most important phenomenon since gin and juice (which seems pretty Leave It to Beaver in comparison, doesn't it?). Many were left distraught, but none was hit harder than the Biebs.

But not to worry, little one! Right as the potent cough syrup was being yanked off shelves, a new version of sizzurp was hitting the markets.

Actabliss — which took its name from the makers of the original cough syrup, Actavis — has come out with Grape Syzurp with Cannabidnoids, which replaces codeine with THC. This new form of sizzurp goes for $45 for a two-ounce bottle from medical marijuana dispensaries, and will most likely appeal to the same demographic as the original.Actabliss's founder, who goes by Actaboss, told LA Weekly :

After Actavis said they were pulling their stuff from the market, I came up with the concept of taking their label and using it.I touted it as a healthy alternative to lean. A lot of people who say they want to stop drinking lean are purchasing it. A whole group of people realize it's good medicine and it works for them."

Thank you, Actaboss, for thinking of the community. Actaboss even tried to get the consistency and color as close to the beloved original as possible. The biggest difference between the two is the high, which Actaboss says "lasts 10 hours" and will have that similar "heavily medicated" syrup feeling.