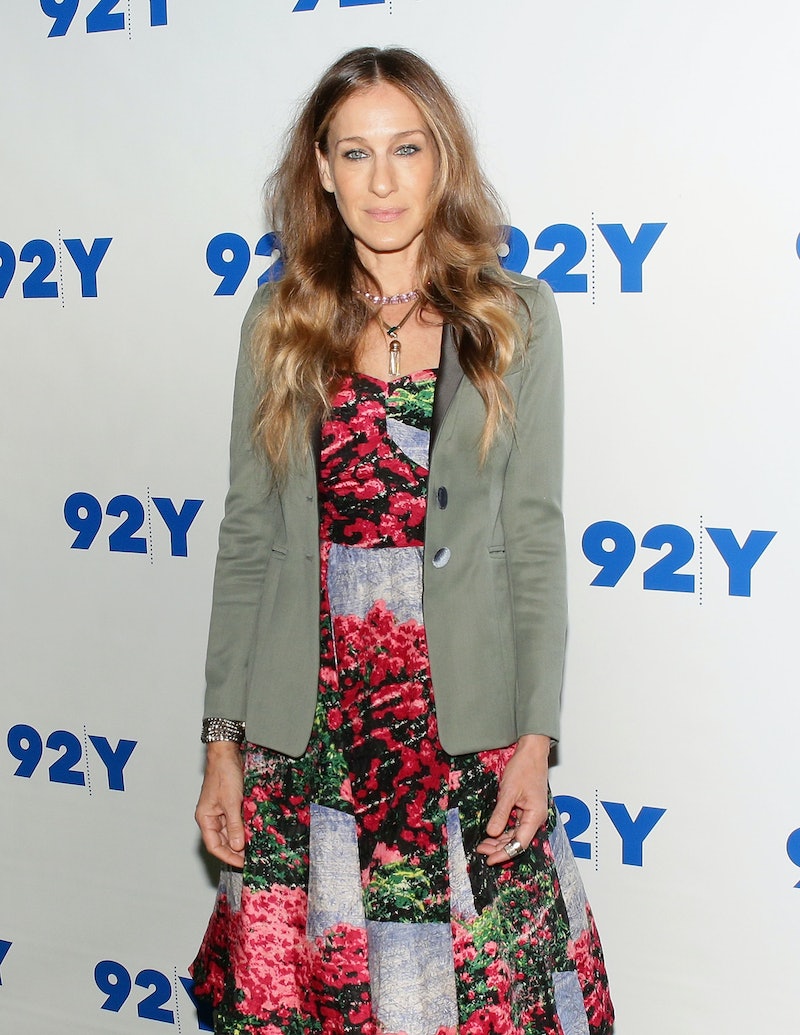 Is it possible that Sarah Jessica Parker didn't even want to play Carrie Bradshaw on Sex & the City ? It seems hard to imagine, considering that it is of course the role she's best known for. It earned her an Emmy, a Golden Globe, and spawned two feature films as well as a spinoff series (the recently cancelled The Carrie Diaries). The show launched SJP's career as a producer and even as a fashion designer. So how could the woman who played Carrie herself actually be more of a Charlotte?

After all, sometimes it's hard to remember where Sarah Jessica Parker begins and Carrie Bradshaw ends. Both of them are devoted New Yorkers and fashion icons, and they do look awfully alike. But Parker is adamant about the fact that the two couldn't be more different.

Parker has always made it clear that though they both run around the city in three-inch heels, she and Carrie Bradshaw are two different people.

"I understand why people identify me with her so much — I was in their homes as Carrie for so long. But while I have great affection for her, I am not her," Parker told Good Housekeeping back in 2006.

Parker was an actress who had, and still has, a no-nudity clause in her contract. All of the other actresses on the show (as well as many of the male guest stars) showed some skin, but never Parker, despite the show's premise. In 2010 she told the UK's Sun:

Before I even started filming Sex And The City , I had a 'no nudity' clause inserted in my contract. By then, I felt no sense of guilt. I knew that I would not feel comfortable with nudity. I was thrilled that the other cast members could accept it and did it really well.

Imagine if Kim Catrall had had that clause. The show would not have worked.

During a panel on May 15 at 92Y, Parker revealed to interviewer Jonathan Tisch, Co-Chairman of the Board and Member of the Office of the President of Loews Corporation, that part of her hesitation to sign on was the nudity and language. For example:

Parker said in a 1997 interview that "If something is really vulgar, I have conversations with the writers where I say I'm not comfortable with that. It doesn't mean they'll make the change, but we do discuss it."

And if you really watch the show, Carrie actually doesn't curse very much. She told Good Housekeeping in 2006, "I basically never cursed either. I don't curse. And no, I never did nudity. I was always too afraid to take my clothes off! It's just not something I'm comfortable with."

Parker told Tisch that after shooting the pilot for Sex and the City for HBO, she actually forgot about it until she ran into a producer friend who said she had seen the show and liked it. When HBO (which was not the powerhouse television studio we know today) told her they wanted to film the rest of the season, Parker says she suddenly had second thoughts.

"I hatched this plan to offer myself to HBO and say, 'You can have me for six years, and I can do a movie or work in an office, but I don't want to be committed to the show.' I felt like it was not the right fit."

Eventually, she was convinced by a producer to do just two more episodes of the show. And well, it seemed to work out. From that first day, “I didn’t regret one moment spent” on it, Parker told Tisch.

So who else could have played Carrie? Actress Dana Delaney turned down the roll because she didn't want to be on a show about sex. She said in an interview,

I had done a movie called ‘Live Nude Girls’ with Kim Cattrall that was somewhat similar. It was women sitting around talking about sex. [‘Sex and the City’ creator] Darren Star was a friend of mine, and he had joined up with Candace Bushnell and came up with this idea and he asked if I'd be in it. It was very much in the early stages, and I had just done ‘Nude Girls’ and ‘Exit to Eden’ and I just said to Darren, ‘I cannot do a show with “sex'”in the title.’ People will lynch me if I do one more thing about sex.”

More like this
Why Sarah Jessica Parker Wanted Fans To Stop Calling Her Hair Choice “Brave”
By Brad Witter
Julie Andrews Revealed A Surprising Behind-The-Scenes 'Bridgerton' Detail
By Grace Wehniainen
Who Is 'Umbrella Academy' Star Elliot Page Dating After His Divorce?
By Jake Viswanath
Paapa Essiedu Likes To Keep His Relationship Pretty Private
By Maxine Harrison
Get Even More From Bustle — Sign Up For The Newsletter