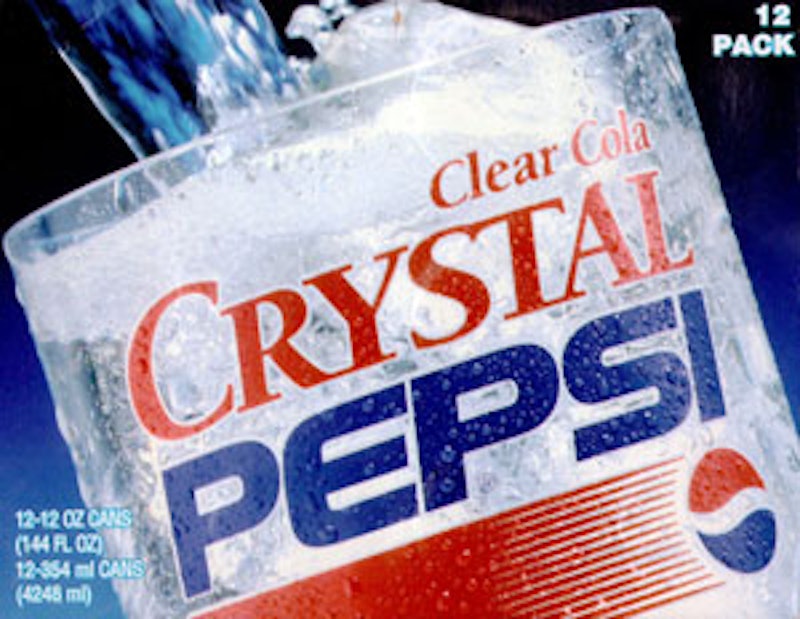 In the early ‘90s, a curious trend overtook the soda market for a hot second: clear cola. Anyone who was around then probably remembers these strange drinks that looked like seltzer but tasted like soda; with the drinks’ clearness being equated with purity and health, they were all the rage for roughly a year or so before disappearing quietly from view. If you’ve been wondering for the past two decades exactly what happened to your Crystal Pepsi, though, good news: We found out!

PepsiCo first introduced Crystal Pepsi in 1992 to test markets in Denver, Sacramento, Dallas, and Providence; evidently they did well enough to warrant a full release, with the product hitting stores nationwide in 1993. Having got wind of the trend, Coca-Cola decided they wanted in on the action, too, launching a clear version of Tab cola in December of 1992. Why did Coke choose Tab, the decidedly less popular cousin of Diet Coke, instead of its flagship brand? No idea, but I suspect it might have something to do with having learned from past mistakes. New Coke, a reformulation of the original recipe, crashed and burned dramatically in 1985; maybe the company decided that if they were going to take another gamble, it would be better to do it through a brand fewer people cared about.

Apparently Coke had the right idea, though, because although the clear cola fad started off with a bang, it faded just as quickly. Poor Pepsi — they launched a massive and probably incredibly expensive ad campaign for Crystal Pepsi in 1993, which included the world’s first realistic, computer-generated bus wrap printing and a hilarious Super Bowl commercial featuring Van Halen… only to have the initially good sales drop so fast that they ended up pulling the drink from the market by the end of the year. Tab Clear vanished a year later in 1994. For the curious, here's that Super Bowl ad:

I... don't even know what to do with this. It's quite possibly the most perplexing advertisement of all time. Who else wants to see it face off with Brad Pitt's Chanel No. 5 ad from 2012?

Anyway, Pepsi remained undeterred and actually tried to launch the clear cola concept not once, but twice more. Shortly after Crystal Pepsi vanished, a citrus soda called Crystal from Pepsi hit shelves, and in 1995, 7 Up — which is owned by PepsiCo — introduced 7 Up Ice Cola to the international market. Like their predecessor, though, both of these drinks failed to catch the interest of consumers and were quickly and quietly disposed of.

I was never a Pepsi drinker, so I don’t remember ever actually trying Crystal Pepsi. I do, however, vividly remember Tab Clear. We didn’t generally keep soda in the house, so I’m not totally sure how my brother and I managed to convince my mom to buy it for us; the clear sodas were mostly caffeine-free, so maybe that had something to do with it (even though Tab Clear actually was caffeinated). In any event, drinking something that looked like Sprite but tasted like Coke blew our tiny little minds in the way that only a food gimmick could to children of the ‘80s and ‘90s. Even though recollections from others who remember drinking Tab Clear maintain that it was absolutely disgusting, I remember rather liking it. Then again, I was seven years old at the time, and since most seven-year-olds aren’t known for the sophistication of their palates… well, you do the math. Also, Tab Clear's ads were just as weird as Crystal Pepsi's, so at least there's that:

These days, Crystal Pepsi seems to be living a quiet retirement. Rumors started buzzing in December of 2013 that the drink was set to make a comeback in early 2014; however, many people failed to take into account the fact that the rumor was started by The Wall Street Sentinel, which, according to its “About” page, is most definitely a satire site (see also: The Onion). The rumors were revealed by the Examiner to be a hoax in February 2014, simultaneously killing the dreams of a generation of nostalgia enthusiasts and making a whole lot of people feel really, really silly.

You can still get your hands on an original can of Crystal Pepsi if you’re really, really dedicated, though. The Daily Dot discovered a few months ago that they periodically pop up on eBay, although they could cost you anywhere between $50 and $100. But even if you do manage to find one, do not, under any circumstances drink it. This guy did, and he filmed what happened when he did it. Warning: Vomit. Lots. And lots. Of vomit.