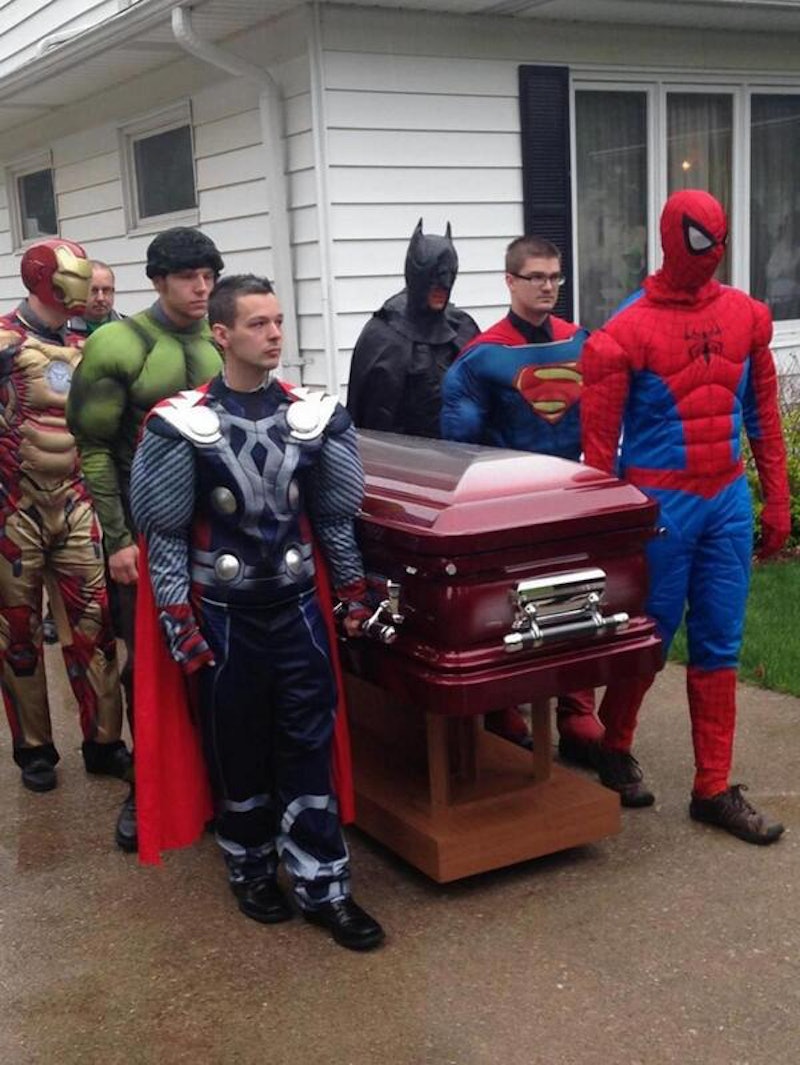 Spiderman, Superman, and the Incredible Hulk have joined forces this month, off the big screen. When five-year-old Brayden Denton died on May 8th of a brain tumor, his family decided the little boy deserved a superhero send-off. At the funeral, Brayden's six pallbearers dressed in superhero costumes, including those mentioned as well as Iron Man, Thor, and Batman.

Brayden's family says that Brayden loved all superheroes, though he was an extra big fan of Spiderman, so having superheroes as part of the funeral seemed like a fitting tribute. Brayden's mom Stacie Denton told the Daily News, "The whole time I saw them carrying Brayden he was probably up there going, 'This is so cool,' That was his world. That's what he would have wanted."

Brayden was first diagnosed with an aggressive form of brain cancer called DIPG last April. Over the course of a year he underwent 30 rounds of radiation to prolong his life; DIPG has no survival rate. Thanks to the Make-A-Wish Foundation, Brayden got a chance to meet Spiderman last year at Universal Studios in Florida, and he recently went to see the new Spiderman film in theaters.

"That was one of our battles that we wanted to make sure he got to see that movie," his mother said. Afterwards, he gave it a thumbs up.

Brayden's uncle Cory, who served as a pallbearer and dressed as Thor for the occasion also remembered his nephew's love of superheroes. "We went to the Superman movie with him and he was dressed up as Superman. I watched all the Iron Mans with him.” Now, he says, he'll always remember his nephew when he watches superhero movies.

And it wasn't only the pallbearers dressing up in superhero-style; Brayden's mother herself wore a Spiderman T-shirt to the funeral, saying that Brayden "could care less about people being in a suits, ties and dresses .... That's not what he thought was neat. He loved looking at superhero T-shirts."

So if all that isn't enough to break your heart, I don't know what is. Rest In Peace, Brayden Denton.