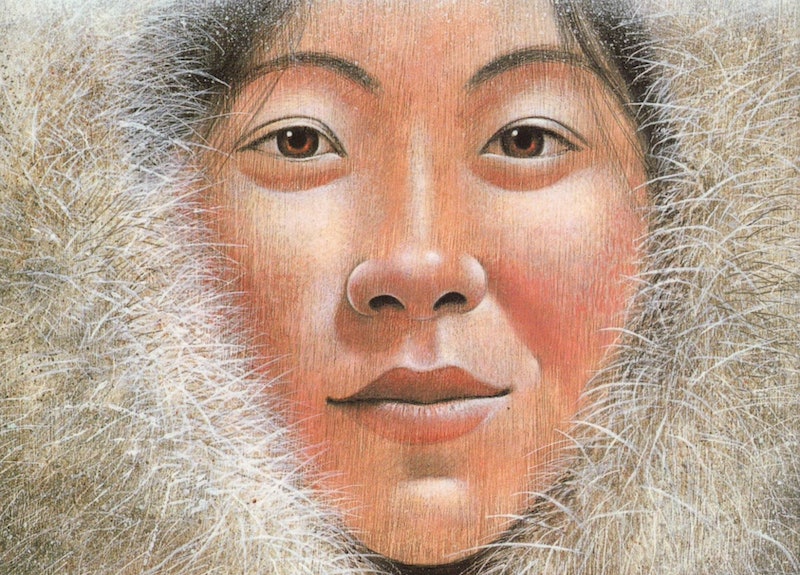 If you were an animal-crazy kid, Jean Craighead George’s classic children’s novel, Julie of the Wolves, was probably right up your elementary school alley. Published in 1972, the adventure-laden tale has endured as a familiar favorite for more than 40 years. Its visceral story of a young girl who literally runs away from home to join a wolf pack combines a bunch of stuff kids love, from bonding with fuzzy animals to directly disobeying parental orders.

But Julie of the Wolves, for all its fun-sounding wish fulfillment, is a surprisingly dark story packed with the kind of stuff that 5th graders aren’t exactly equipped to deal with at such a young age — or even actually remember.

Like many other ostensibly kid-friendly books, Julie of the Wolves feels quite a bit different with some added age and perspective. Let’s put it this way — the way you experience Julie of the Wolves at age twentysomething is a hell of a lot different than the way you do during elementary school. (It even makes you wonder what else you might have missed from your other childhood faves). Here's what slipped by your cartwheeling-in-the-grass, scented marker-wielding self when you last read Julie of the Wolves:

Her Eskimo name is actually "Miyax," but the Americanized version of it sticks with her, though she does boldly declare, "I am Miyax now" when she strikes out for the tundra.

The Book Isn't Told In a Linear Fashion

You might be able to tell Julie's story from the very beginning to the very end, but elementary school you probably didn't notice that the book picks up in the middle, with Julie already entrenched on the tundra and trying to make pals with the wolves, which can be a touch confusing. Still, it's an effective narrative tool, and a wonderful example of mixing things up for the younger set.

Julie Didn't Intend to Take Up With a Wolf Pack

Think back to what you remember most about Julie of the Wolves. It's about a girl who runs away from home to join up with a wolf pack... right? Not really. Julie flees her life in Alaska to (hopefully) meet up with her San Francisco pen pal, Amy. Although she has a solid plan — walk to Point Hope, meet up with an ice-breaking ship, work her way to San Fran — that doesn't happen, and she soon finds herself lost on the tundra. The only living beings around? Her wolf pack.

Julie's initial plan after finding the wolf pack was to hang out with them, gain their trust, and eventually share their food. That takes a long time, and Julie nearly dies before she gets to partake in fresh meat, as killed by the adults of the pack — including beloved leader Amaroq and eventual traitor Jello — when she discovers the secret to getting them to share partially digested meat (it take a generous nudge to the mouth).

Baby Wolf Kapu Was a Leader From the Start

Little Kapu eventually takes over the pack as leader, but he flexes his muscles as a leader and influencer from the very beginning. Remember how Sister would follow him no matter how exhausted she was? George makes it clear that Kapu is going to lead one day, even it's sooner than we'd expect or like (elementary school foreshadowing!).

Julie Ran Away From An Arranged Marriage

After her mother died, Julie went to live with her father, who then passed her off to her Aunt Martha, who lived the kind of urbanized life that didn't appeal to Julie. The only way out? Marry the son of her father's friend Naka and return to a more traditional life. Julie, desperate to get away from Martha, goes for it. She's only 13 at the time.

Her father-in-law Naka grows "evil" when he drinks and even ends up in jail for his drunken behavior. The only person who can help? Kindly Mr. Pollock, who also happens to be the father of Julie's beloved pen pal Amy.

Julie Was Sexually Assaulted By Her Unstable Husband

Although Julie is disappointed to meet Daniel, who is at best a bit challenged and at worst severely unstable, she goes along with their marriage. For a while, Julie gets to live a totally normal life without having to attend to any marital duties — until Daniel comes home one night and attacks and sexually assaults her, which finally forces her to run away out of extreme fear.

George herself learned about how to communicate with wolves before even writing the book, and while it may sound a bit fantastical that someone could integrate themselves into a wild pack, Julie's ability to bond with the wolves by watching how they interact with each other isn't totally crazy. Just don't try it at home (or on the tundra).

Amaroq Is Killed By Hunters Who Sweep the Tundra in Helicopters

Of course you remember Amaroq's death, but you might not have realized that the shocking manner in which he's killed still happens to this day.

The Book Is Almost Unbearably Sad

Still reeling from remembering Amaroq's death and how messed up Daniel is? Then now might not be a good time to remind you of some of the other terrible things that happen in Julie of the Wolves, like Kapu being shot, beloved bird Tornait dying, or the disappointment Julie feels when she finally finds her father.

The Book Is Considered a "Challenged" Book by the ALA

George's book has been banned a few times — mainly thanks to that abuse scene — and it still pops up on the American Library Association's list of most challenged books, most notably back in the '90s. If you got to read the book in your younger years, consider yourself lucky, because not everyone got that same freedom.

The Book Actually Has Two Sequels

George penned a pair of sequels to the book — Julie and Julie's Wolf Pack — that didn't hit shelves until 1994 and 1997, respectively. Julie focuses on Julie's re-integration back in the human world and her quest to keep Kapu and the entire wolf pack safe from hunters (even her own father). Julie's Wolf Pack continues the story, with a special interest in telling the wolf pack's tale (tail?) from their own perspective as they (and Julie) continue to grow up without really growing apart.

Two different groups have been trying to launch both a stage musical and a feature film based on the book since the early aughts. Neither has yet come to pass — the stage musical was last workshopped in 2005, and the film appeared to sputter out sometime in 2008, thanks to both casting and financial troubles.