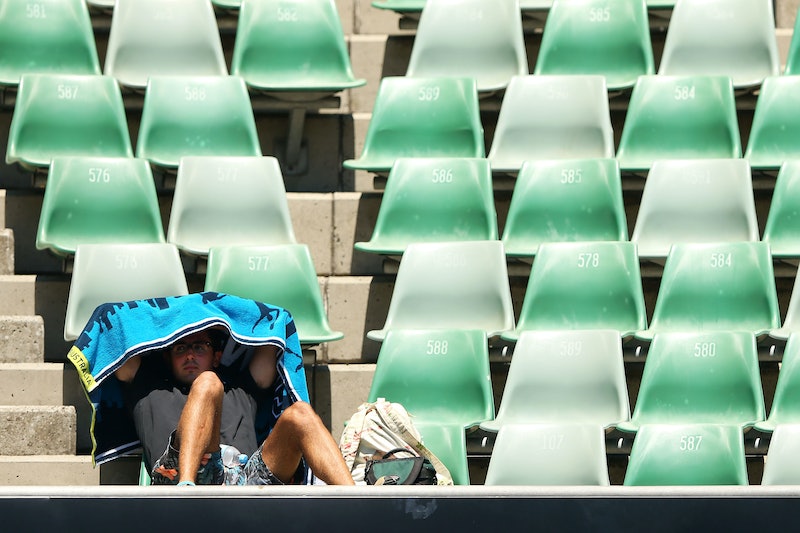 Hold on to your Joo Janta 200 Super-Chromatic Peril Sensitive Sunglasses, you hoopy froods. Towel Day is once again upon us!

Established in 2001 in memory of the late, great Douglas Adams, Towel Day marks a celebration of Adams’ best-known creation, The Hitchhiker’s Guide to the Galaxy, and invites fans to carry around a towel (due to the object’s immense significance in the series, natch) to commemorate the day. Though the concept might sound bizarre to a strag (that is, a non-Hitchhiker), the event fits right in thematically with Adams’ eccentric tale of comedic science-fiction. In HG2G, Douglas Adams toys with language, pokes fun at humanity, and whips his hapless, mischievous, and unfailingly memorable characters across the universe on dozens of rollicking space adventures.

The Hitchhiker's Guide to the Galaxy by Douglas Adams, $7, Amazon

But for all its sidesplitting humor, the Guide also offers us important lessons about life, the universe, and everything. So grab your towel, sit back with a glass of Pan Galactic Gargle Blaster, and listen up to the wise and wacky words of our favorite Hitchhiker:

As explained in the Guide, towels are “the most massively useful thing an interstellar hitchhiker can have.” A towel has both practical value (can be used for warmth, as shelter, as a weapon, and, strangely, to dry one’s body) as well as psychological value (if a non-Hitchhiker sees you with a towel, they’ll assume you’re fully stocked with other necessities as well).

The Guide has become the most successful publishing sensation to emerge from Ursa Minor, due in no small part to the appearance of the comforting words “DON’T PANIC!” emblazoned in friendly lettering on the cover. Embrace this simple message while humming along to the Bob Marley song of the same theme and you won’t have another stressful day in your life.

Zaphod Beeblebrox, President of the Galaxy, has two heads, but neither of them prevent him from engaging in a bunch of really stupid, really inadvisable activities, such as stealing a priceless spaceship of Infinite Improbability. He has also managed to be voted the "Worst Dressed Sentient Being in the Known Universe" seven consecutive times.

4. Improbable does not mean impossible.

5. “Just when you think life can’t possibly get any worse it suddenly does.”

We feel you, Marvin. Life can, at times, be a downer. Especially if you're a robot and, you know, not alive.

6. There are few things in the universe worse than bad poetry.

The public reading of the second-worst poetry in the universe, written by a member of the Azgoths of Kria race, was so intolerable that “four of his audience died of internal hemorrhaging and the president of the Mid-Galactic Arts Nobbling Council survived only by gnawing one of his own legs off.” Poetry is a powerful tool… which is probably where the term “poetic license” comes from. Write safely, kids.

7. There are few things in the universe better than a solid cup of tea.

All Arthur Dent really wants after the destruction of his planet is a steaming cup of tea, but it took hours of collaboration with even the most technologically fancy drink synthesizer to produce one to his liking. Tea also served as the catalyst for the invention of the aforementioned Infinite Improbability Drive, engine of the fantastically advanced Heart of Gold spaceship. In retrospect, the irreplaceable importance of tea to scientific advancement makes the dumping of a perfectly good shipment of the stuff into the Boston Harbor one of the verifiably dumbest things America has ever done.

8. We are not the most intelligent species on Earth, so stop acting pretentious.

In HG2G, only the dolphins and the mice managed to peace out before the Earth was destroyed to make way for a hyperspace bypass. The ever-courteous dolphins attempted to warn us pitiable humans, but the messages were misinterpreted as “amusing attempts to punch football or whistle for tidbits.” The mice, on the other hand, spent most of their time in laboratories conducting complex experiments on humans. #forscience

Humans, as defined by the Guide, are “not noted for being particularly bright, up until they are destroyed, if they even manage to do that much correctly, they actually still think that digital watches are a pretty neat idea, and they spend most of their time concerning themselves with moving about little green pieces of paper.” Don’t worry, Mr. Adams, we’ve clearly progressed as a species since your time, in that we all pretty much agree digital watches aren’t a neat idea at all, and… yep, that’s about it.

The existence of the “Somebody Else’s Problem” field, developed to render something invisible, provides yet another knock on our inherently self-centered nature. The SEP field “relies on people's natural predisposition not to see anything they don't want to, weren't expecting, or can't explain.” To paraphrase the ubiquitous Sherlock Holmes, we see but we do not observe. For shame, humanity. For shame.

Thus stateth the Guide: “There is an art, it says, or rather, a knack to flying. The knack lies in learning how to throw yourself at the ground and miss.” Piece of (hopefully un-smushed) cake.

12. Always listen to your mother.

…because there are times, such as when you’re “trapped in a Vogon airlock with a man from Betelgeuse, and about to die of asphyxiation in deep space,” when you’ll really wish you’d listened to what your mother told you when you were young, which you wouldn't know, because you weren’t listening.

13. Sometimes a cigar is just a cigar.

Douglas Adams’s humor is not for the existentially faint of heart; his satire reflects postmodernist notions of the ostensible lack of any Ultimate Meaning in the universe. But, hey, yet another excuse to YOLO it up!

14. If you’re unsatisfied with your lot in life, just be glad you’re not an elevator.

At least you have not, like elevators in the Hitchhiker's Guide offices that have the misfortune of being intelligent, become “terribly frustrated with the mindless business of going up and down, up and down, experimented briefly with the notion of going sideways, as a sort of existential protest, demanded participation in the decision-making process and finally [taken] to squatting in basements sulking.”

As per the Guide, “It is a well known fact that those people who most want to rule people are, ipso facto, those least suited to do it. To summarize the summary: anyone who is capable of getting themselves made President should on no account be allowed to do the job.”

Bad news, as we all know, “obeys its own special laws.” Watch your back!

17. It is the questions, not the answers, that truly matter.

When the supercomputer “Deep Thought” finally produced the Ultimate Answer to Life, the Universe, and Everything after a calculation period of seven and a half million years, those who were at hand to receive The Answer were left wondering what The Question was in the first place. Our very own Earth was then commissioned to calculate it.

18. …But if you really want to know, the ultimate answer to the ultimate question of life, the universe, and everything is:

Hold up. I’m not about to spoil something that massively important, am I? Here: have a nice, steaming cup of tea. And don’t forget your towel on your way out.

The Hitchhiker's Guide to the Galaxy by Douglas Adams, $7, Amazon