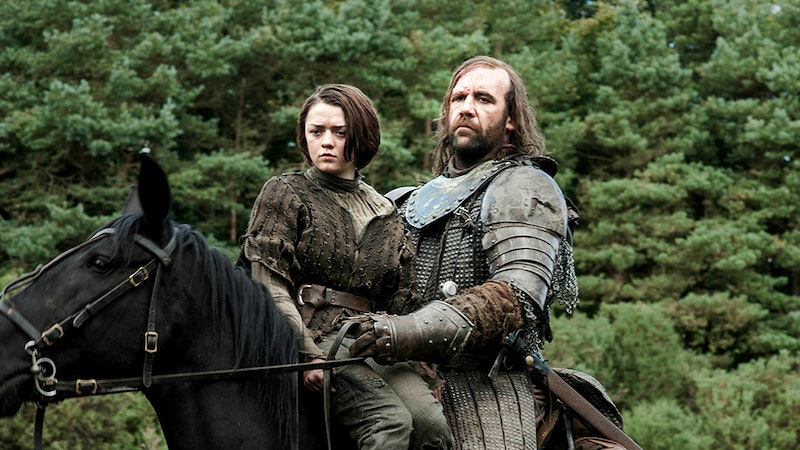 Game Of Thrones...this summer's new blockbuster buddy comedy? Apparently, yes (ok, not really, but kind of). There's a new YouTube video that compiles the best moments of Game Of Thrones buddies Arya Stark and The Hound's friendship in a spoof trailer for the new (hypothetical and not actually happening) buddy comedy of the summer, "Arya & The Hound". The video features some hilariously bad lip reading (see "F*** the king"), "dick stabbing", and the best, worst times Arya and The Hound had the most spoofable TV friendship ever. Don't even lie. You would buy tickets for this movie.

"Arya & The Hound" is one of several Game Of Thrones- As-Buddy-Comedy video spoofs, including Vulture's hilarious "One And A Half Man", that have cropped up lately. These joke trailer all play on the fact that 1. Everything about GOT practically begs to be spoofed in a satirical video, and 2. Once you get past the porny sex scenes and stabbing, GOT is really a show about the celebration of medieval-era bromance. Think about it: Arya and The Hound, just two bros, riding the same horse, stabbing other bros, doing what medieval bros do. It's ok, we're all thinking it. They do regular stuff that regular friends do, like grossing each other out on purpose and and occasionally arguing about stuff: