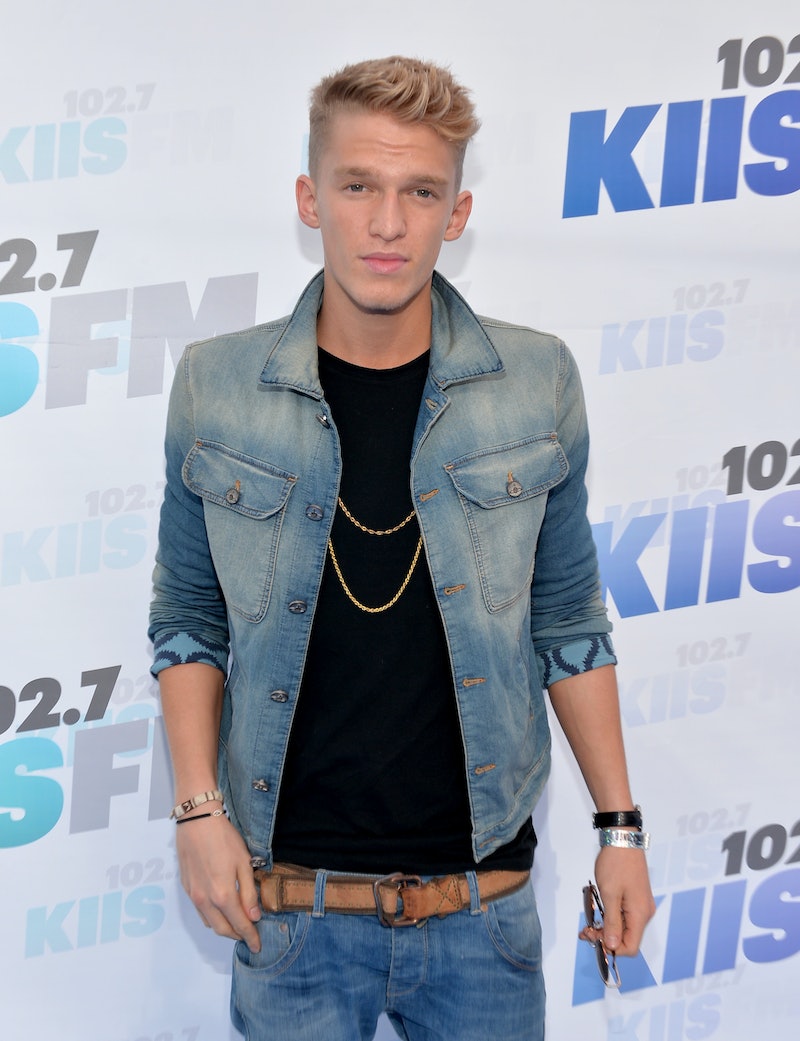 The results are in. Intelligence, according to pop star Cody Simpson, is officially "the sexiest thing in the entire world." The Australian singer delivered his valedictorian speech on Thursday, May 22 after graduating from the Atlanta high school where he was "administered." He closed with the above show-stopping comment about intelligence, which made all of the girls in his class wish they'd studied about ten times harder. (Or that they hadn't dumbed themselves down a la Lindsey Lohan in Mean Girls in order to get his attention.) In addition to titillating every nerd in the audience, Simpson's comment confirmed that he is, as the valedictorian, also "the sexiest thing in the entire high school graduating class." Just imagine how much gray matter is trapped under that blond mop.

In honor of a male pop star finally acknowledging that brains, not beauty, brawn, or bucks, really make someone hot to trot, I'd like to analyze how one of Simpson's most famous music videos really drives this message home. After all, if he was able compete in Dancing with the Stars while taking a rigorous load of high school classes, this multitalented individual must have been able to prove that "intelligence is the sexiest thing" in his pop music. Let's take a look at "Pretty Brown Eyes" to see how the message manifests itself.

While it's hard to tell how intelligent these girls are just from the music video, the lyrical subtext makes it clear that the object of Simpson's affection is being admired for her brains. I've taken the liberty of annotating the lyrics to include what Simpson really meant. If you can't decode this yourself, however, you're simply not smart enough for a man like Cody Simpson.

This girl[s' rights advocate] she came 'roundThe corner, looking like a model [T, a work of industrial genius and one of the harbingers of modernity][Mathematics] Magazine figure[s], she was [carrying an Erlenmeyer flask] shaped like a bottle, Long straight hair [covering her sizable brain], she was fly as a bird[y, the title character in Karen Cushman's young adult novel, Catherine, Called Birdy, which details the coming-of-age of an intelligent young woman in thirteenth century England] First time ever I was lost for words [because her extensive vocabulary far outstripped my relatively paltry grasp on the English language]

I could go on, but I think we've all seen enough. In fact, my brain is so taxed from interpreting Simpson's wordplay that I'm not sure if even I can plumb the depths of this gem:

This girl she was a little hottie,She know she got itCame from the city so she loves to partyThe JT song make her move that bodyShe dancing all night long

This is doctorate level work, to be sure. Not since James Joyce's Ulysses have we been faced, as a nation, with a work of such delightful opacity. Like all good nuts, this one will take months to crack.

In the meantime, however, I can find solace in the fact that somewhere, drifting in Simpson's crowd of rapt female fans, there is a woman who has the brains to live up to this almost impossibly sexy intellectual standard. No matter how many stars he has danced with, only this unknown mind will be expansive enough to fulfill Simpson's every fantasy. Now that he has graduated from high school, the world is truly his oyster. I hope that, as he leaves us and his graduating class with this parting quip, his one and only true love will feel the cosmic call, follow the music video trail, and intellectualize her way into his arms.